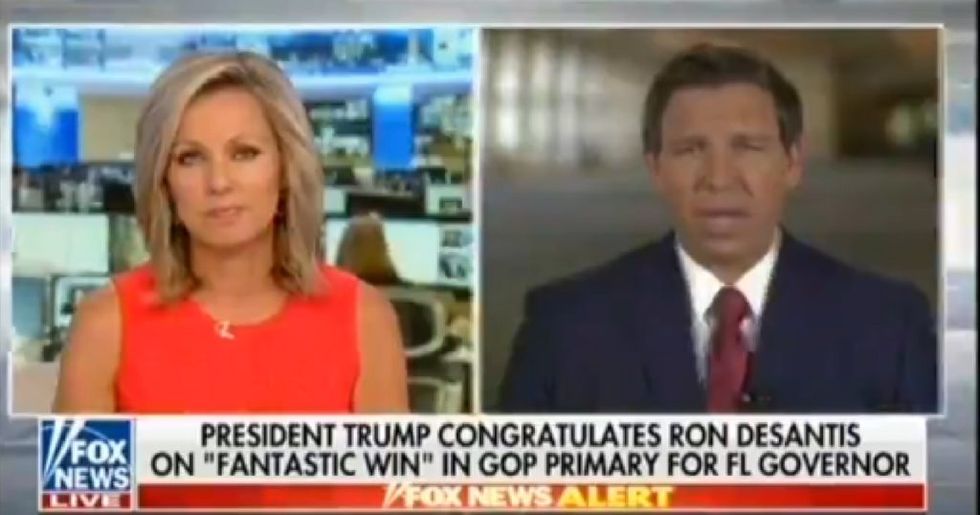 Florida Republican gubernatorial candidate Ron DeSantis is taking serious heat for an interview he gave on Fox News this morning in which he used racist dog-whistle terms to attack his Democratic opponent Andrew Gillum, who won an upset victory last night to claim the Democratic nomination for governor.

DeSantis called Gillum, who is African American, "articulate" and said Florida voters better not "monkey this up" by voting for Gillum.

"You know, this is a guy, although he’s much too liberal for Florida, I think he’s got huge problems with how he’s governed Tallahassee, you know he is an articulate spokesman for those far left views."

"The last thing we need to do is to monkey this up by trying to embrace a socialist agenda."

People noted that referring to African-Americans as "articulate" and comparing them to monkeys are widely seen as traditional racist rhetorical ploys.

@acedriven @bec4311 @SadieInProgress @stevemorris__ Giving the impression most black people are something other than articulate usually
— AIRPLANE MODE (@AIRPLANE MODE) 1535553296.0

DeSantis was slammed for his remarks, and rightly so.

Republican strategist Ana Navarro was pointed in her criticism:

It really didn't take long, did it?

In response to the uproar, Fox News tried to distance itself from DeSantis's comments. Anchor Sandra Smith, who hosted DeSantis on her show, said in a statement:

We do not condone this language and wanted to make our viewers aware that he has since clarified his statement.

Smith then read a statement from the DeSantis campaign, which claimed that attempts to "characterize" his remarks as racist are "absurd."

Ron DeSantis was obviously talking about Florida not making the wrong decision to embrace the socialist policies that Andrew Gillum espouses. To characterize it as anything else is absurd. Florida’s economy has been on the move for the last eight years and the last thing we need is a far-left democrat trying to stop our success.

But the furor online continued.

Democratic strategist Scott Dworkin tweeted that DeSantis's use of a "racist dog whistle" was "disgusting."

.@RepDeSantis-Hey you lame slime ball, you need to withdraw from the race for using a racist dog whistle. Everyone… https://t.co/igJygTUkQm
— Scott Dworkin (@Scott Dworkin) 1535556212.0

Virtually no one thinks it was an accident.

@stevemorris__ @NatalieGBorden How can a group of people be so unaware of their surroundings and the connotation of… https://t.co/OU1IcC8a9K
— Deep State Dogs (@Deep State Dogs) 1535551607.0

Even more disturbing is that DeSantis knows his base will gobble this up.

This is why it's imperative to vote.

@funder @RepDeSantis @AndrewGillum Everyone must get out to vote and make sure we don’t end up w an awful men like… https://t.co/ahPvlUDTCe
— stand for truth (@stand for truth) 1535557196.0

Gillum has not commented on DeSantis's statements.