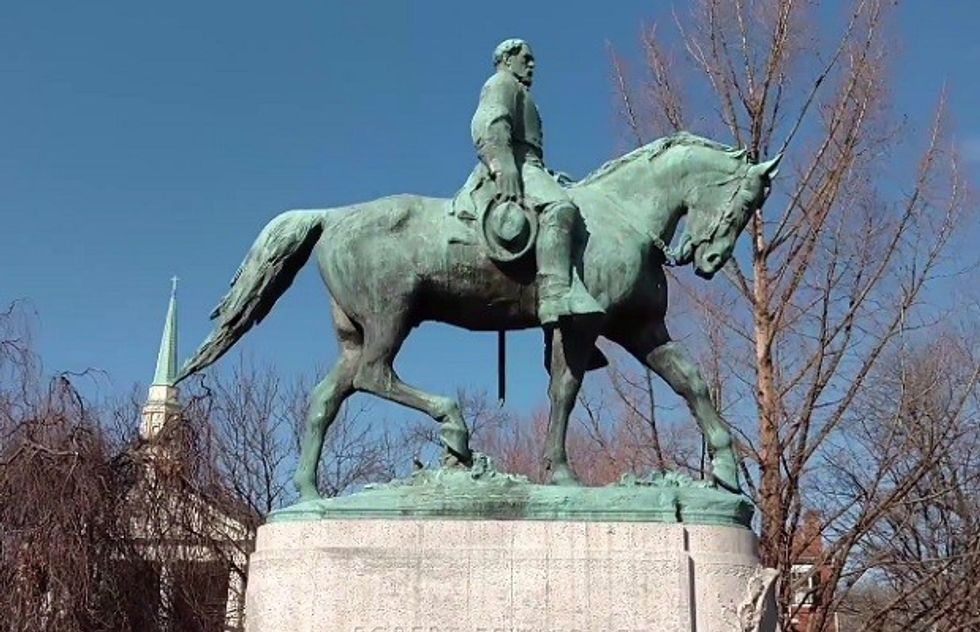 The violence that was perpetrated by white supremacists in Charlottesville, Virginia on Saturday stemmed from a protest they were holding against the planned removal of a bronze Robert E. Lee statue from a public park. Robert E. Lee was the general of the Confederate Army during the Civil War, and has become a symbol of white supremacy among the new alt right movement.

That's not how at least one of General Lee's descendants sees it.

On Wednesday, Robert E. Lee V, General Lee's Great great grandson, condemned the violence in Charlottesville and suggested perhaps it was time to remove these statues from the public square.

"Eventually, someone is going to have to make a decision, and if that's the local lawmaker, so be it. But we have to be able to have that conversation without all of the hatred and the violence. And if they choose to take those statues down, fine. Maybe it's appropriate to have them in museums or to put them in some sort of historical context in that regard."

Lee said his family sends "their best to the people in Charlottesville" and that:

"Those sorts of acts on Saturday, that's just not to be tolerated. We feel strongly that Gen. Lee would never ever stand for that sort of violence."

The Charlottesville City Council had earlier voted to remove Lee's statue from the park once known as Lee Park, although its removal is currently on hold pending litigation. A few months ago, the park was renamed Emancipation Park.

This condemnation comes as descendants of Stonewall Jackson, another prominent Confederate general, have called for the removal of his statue (and "of all Confederate statues...") from Richmond, Virginia's Monument Avenue:

"We are native Richmonders and also the great, great grandsons of Stonewall Jackson. As two of the closest living relatives to Stonewall, we are writing today to ask for the removal of his statue, as well as the removal of all Confederate statues from Monument Avenue. They are overt symbols of racism and white supremacy, and the time is long overdue for them to depart from public display. Overnight, Baltimore has seen fit to take this action. Richmond should, too."

In addition, Bertram Hayes-Davis, the great-great-grandson of the Confederate president, Jefferson Davis expressed a similar sentiment.

"In a public place, if it is offensive and people are taking issue with it, let's move it. Let's put it somewhere where historically it fits with the area around it so you can have people come to see it, who want to understand that history and that individual."

Confederate statues in Baltimore were removed earlier this week and back in May, New Orleans had four Confederate statues removed, their City Council having called them "a public nuisance." Other cities around the country plan to follow.
CharlottesvilleRobert E. LeeWhite Supremacists