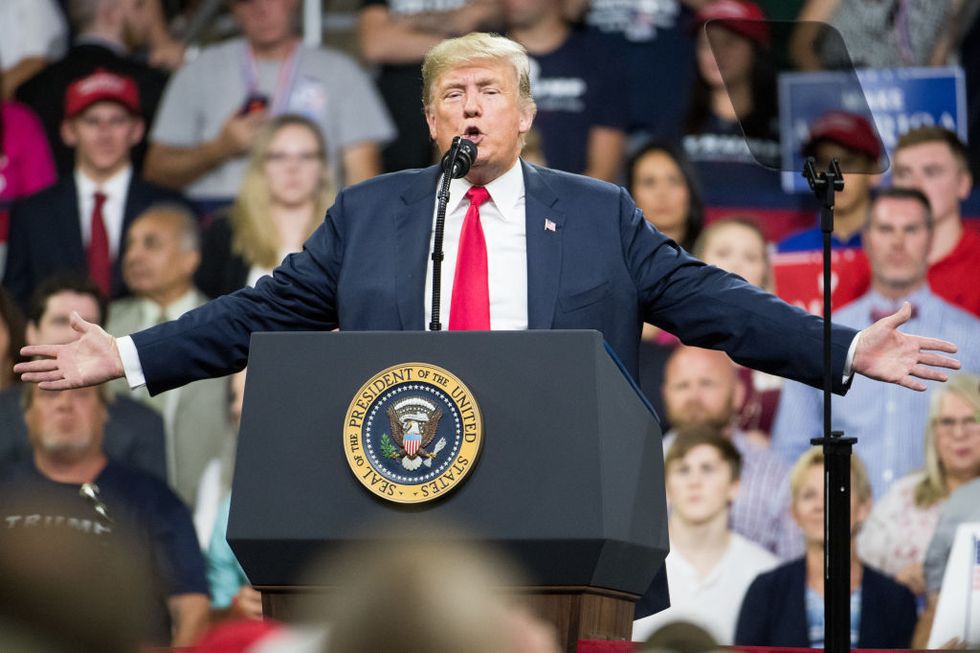 Speaking at a campaign rally in Springfield, Missouri on Friday, President Donald Trump claimed that the United States, under his leadership is "respected" once again.

"Our country is respected again, remember that," the president said before proceeding to gloat about the economy, the stock market, the military, law enforcement, and Immigration and Customs Enforcement (ICE).

New research indicates, however, that America's global image has suffered drastically since former President Barack Obama left office. The Pew Research Center found that "as the second anniversary of Trump’s election approaches, a new 25-nation Pew Research Center survey finds that Trump’s international image remains poor, while ratings for the United States are much lower than during Barack Obama’s presidency."

The graph below, derived from percentage medians based on results from 25 countries, outlines much of this trend. For example, confidence in Trump now stands at 27 percent globally, while 70% of nations surveyed say they do not have confidence in Trump. Views of the U.S. are also widely split, with 50 percent holding favorable views of the U.S. and 43 percent holding unfavorable ones. And other variables––such as whether the U.S. respects the personal freedoms of its people––do not fare much better.

Some of America's closest allies report significant frustration with the U.S. under Trump's leadership.

In Germany for instance, which Trump has sparred with multiple times (including rather notoriously with Chancellor Angela Merkel at this year's G7 summit), just 10 percent. have confidence in Trump. Additionally, Pew notes, "three-in-four people say the U.S. is doing less these days to address global problems, and the share of the public who believe the U.S. respects personal freedoms is down 35 percentage points since 2008." Angela Merkel is generally well-liked across the European Union.

In France (where the relationship between Trump and President Emmanuel Macron has never been stellar), only 9 percent have confidence in Trump. 81% think the U.S. "doesn’t consider the interests of countries like France when making foreign policy decisions," Pew reports. Macron remains very popular in the European Union.

In fact, some of our most negative ratings are in Europe, Pew notes:

Ten of the 25 countries in this year’s survey are European Union member states, and across these EU nations a median of just 43% offer a favorable opinion of the U.S. Meanwhile, majorities in four of the five Asia-Pacific nations polled give the U.S. a positive rating, including 83% in the Philippines, one of the highest ratings in the survey. The U.S. also gets high marks in South Korea, where 80% have a positive view of the U.S. and confidence in President Trump has increased over the past year from 17% to 44%.

The graph below shows that confidence in Trump remains low across the E.U.:

Interestingly enough, Trump fares the worst in Russia, where the average Russian finds him less attractive than the Russian oligarchs who, U.S. intelligence has concluded, ferried him to power:

The country giving the U.S. its lowest rating in the survey, and the place where the biggest drop in U.S. favorability has taken place over the past year, is Russia. Just 26% of Russians have a favorable opinion of the U.S., compared with 41% in 2017. A 55% majority of Russians say relations have gotten worse in the past year, and the share of the public with a positive view of Trump has dropped from 53% to 19%.

Our closest neighbors also think less of us. Pew's survey found that among Canadians only 25 percent rate Trump positively and 63 percent believe the U.S. is doing "less than in the past to address global problems." 82 percent believe the U.S. doesn't consider Canada's interests when devising policy. Trump's lowest ratings are in Mexico, which he has often scapegoated regarding illegal immigration. Just 6 percent of Mexicans expressed confidence in Trump's leadership.

Generally speaking, however, favorable views of the U.S. prevail, as the graph below indicates:

The ally with which Trump enjoys his highest rating is Israel, where his positive rating jumped to 69 percent, up from 56 percent in 2017. The graph above shows that views on the U.S. are predominantly favorable in Israel, too, standing at 83 percent.

Opinions on the direction of U.S. power remain rather divided. Pew reports that "Across the 25 nations surveyed, a median of 31% say the U.S. plays a more important role in the world today than it did ten years ago; 25% say it plays a less important role; and 35% believe the U.S. is as important as it was a decade ago."

The general consensus, however, tells us that China's role on the global stage has increased: "A median of 70% say China’s role on the world stage has grown over the past 10 years. Still, by a slim margin, more people name the U.S. as the world’s leading economic power (a median of 39% say the U.S., 34% say China)."

However, "the idea of a U.S.-led world order is still attractive to most," Pew notes, and when asked whether they would prefer China or the U.S. as the top global power, "people in nearly every country tend to select the U.S., and this is particularly common among some of China’s Asia-Pacific neighbors, such as Japan, the Philippines, South Korea and Australia."

The graph below shows how opinions on how power between the two countries has shifted.

The full Pew report can be found HERE.