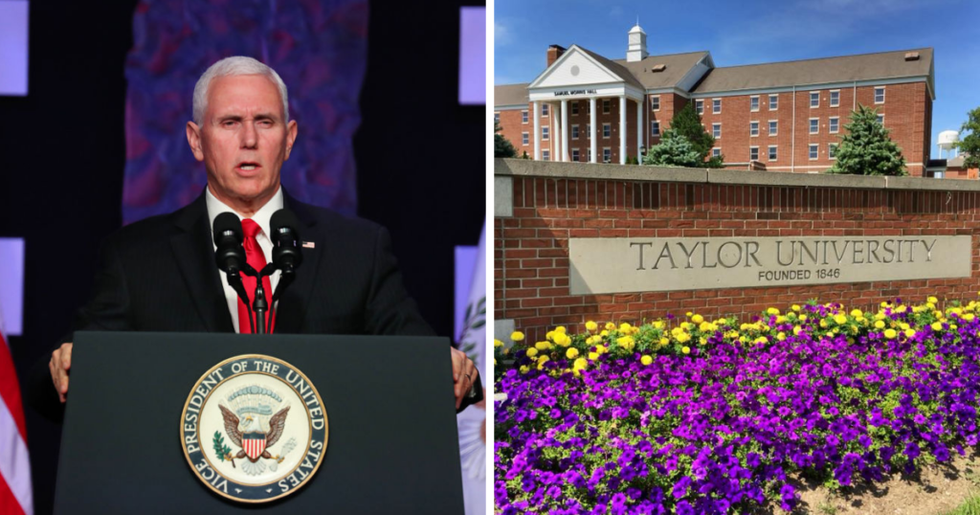 A Change.org petition started by 2007 Taylor graduate Alex Hoekstra after the school made the announcement on April 11 has garnered over 3,500 signatures. The petition calls for university officials to rescind the invitation:

“Inviting Vice President Pence to Taylor University and giving him a coveted platform for his political views makes our alumni, faculty, staff and current students complicit in the Trump-Pence Administration’s policies, which we believe are not consistent with the Christian ethic of love we hold dear."

Speaking to Newsweek, Hoekstra said that he is not alone in feeling "personally injured" by Pence and the current administration:

Others have taken to social media to criticize the university's decision.

As an alumnus of Taylor University, I unite with faculty and students who are protesting the invitation to Mike Pen… https://t.co/fXKqTebPjG
— Russ Clark (@Russ Clark) 1555464808.0

In an op-ed for The Washington Post, adjunct faculty member Amy Peterson also criticized the decision:

“This decision doesn’t reassure those with underrepresented voices that they can flourish at Taylor; it leaves them feeling isolated and invisible. It reads like a deliberate and definitive statement about who we are and about what we think virtue in the public sphere looks like — and, by implication, who doesn’t belong...

As soon as the announcement was made, a professor from the biblical studies, Christian ministries and philosophy department called for a vote of dissent. After some discussion, during which some faculty expressed support for Pence’s presence, comparing him to the biblical figure of Daniel, and others critiqued the decision, 49 faculty voted in favor of Pence addressing the community at commencement. Sixty-one voted in opposition."

Taylor University is not budging, according to James Garringer, a spokesman for the university:

“Since making the announcement of Vice President Mike Pence’s upcoming commencement speech, we have received feedback from people on either side of the issue. Taylor University is an intentional Christian community that strives to encourage positive, respectful and meaningful dialogue. We look forward to hosting the Vice President next month.”

The university's refusal to rescind the invitation was praised by Kevin Holtsberry, a Taylor alumni.

I was very nervous initially that the very vocal overwhelming minority might sort of sway Taylor to take a different stance so I'm very glad they're taking that solid stance," Holtsberry said during an appearance on "Fox and Friends."

"The vice president has very orthodox Christian beliefs - very traditional beliefs - that a vast majority of Christians believe," he continued. "His political views are shared by a large section of America, so it's not a radical choice, and I think people should be able to engage and disagree with his views and do it in a mature fashion."

This isn't the first time Pence has been at the center of a controversy on a university campus.

In May 2017, a group of more than 100 graduating seniors at the University of Notre Dame walked out of their own graduation ceremony in protest of Pence, who delivered their commencement address there that morning.

A student activist group called We Stand For staged the walkout in response to policies Pence pursued as governor of Indiana that they say targeted the most vulnerable.

“We invite all students, faculty, and families who will be attending the Commencement ceremony to walk out with us as we take back our graduation and show our dissatisfaction with the University’s selection of Mike Pence as honored speaker,” the group wrote at the time. “We also will walk out in dignity and solidarity with all marginalized people affected by Pence’s politics, both on this campus and throughout our nation.”

Pence has proven a most divisive figure on both sides of the political aisle. Although Donald Trump gained favor from the right when he picked the evangelical Indiana Governor as his vice presidential running mate, his choice received vigorous denunciations from the left.

A former GOP leader who served in the chamber for nearly a decade, Pence fulfilled Trump’s need for someone who could work closely with the executive branch. Pence’s record for social conservatism has drawn harsh condemnation from LGBT and abortion rights advocates.

As governor of Indiana, Pence approved the Religious Freedom Restoration Act, a measure allowing businesses to discriminate against consumers based on their sexual orientation and gender identity.  A fierce backlash from business and the tourist industry, along with a trending hashtag #BoycottIndiana, forced the governor and state legislatures there to add an amendment clarifying that nothing in the law was intended to permit discrimination.

In 2006, as head of the Republican Study Committee, Pence voiced his opposition to same-sex marriage legislation when he declared “societal collapse was always brought about following an advent of the deterioration of marriage and family.”

Similarly, Pence has also pledged his support for the First Amendment Defense Act (FADA), which would prohibit “the federal government from taking discriminatory action against a person on the basis that such person believes or acts in accordance with a religious belief or moral conviction that: (1) marriage is or should be recognized as the union of one man and one woman, or (2) sexual relations are properly reserved to such a marriage.” FADA would also eliminate federal remedies for discrimination and allow those committing discriminatory acts to sue the federal government for interfering in their “right” to discriminate against LGBTs.