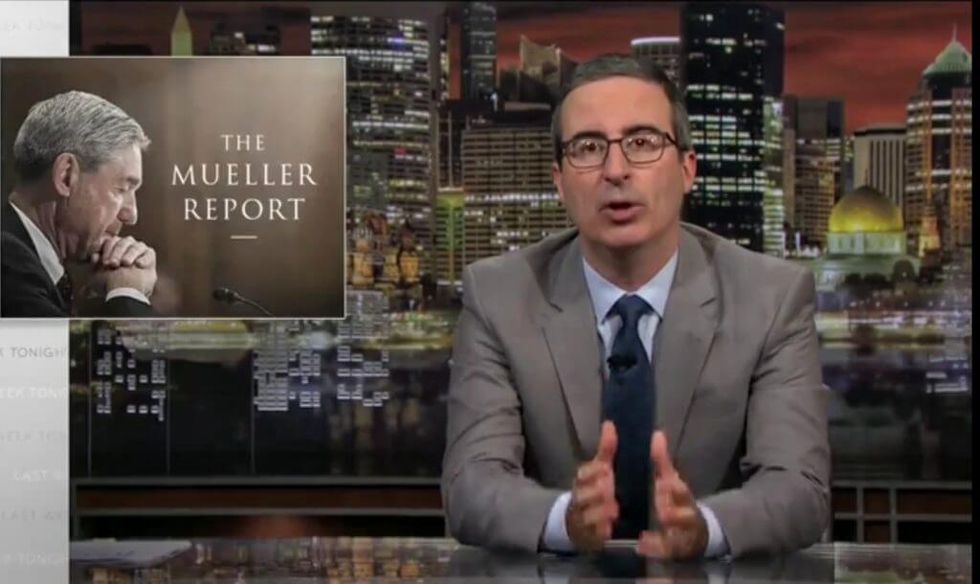 After being off for a week, HBO's Last Week Tonight host John Oliver finally weighed in on the story dominating the news cycle: the Mueller Report.

Oliver, a vocal critic of President Donald Trump, stated what many others did. Despite the President's spin on the report, even his own hand-picked Attorney General's summary acknowledged Trump was not exonerated by the investigation.

While Mueller found insufficient evidence for a conviction, ample evidence was found justifying a need for the investigation. Much of that evidence occurred publicly through the President's public comments and Twitter posts.

"OK, so there’s two things there: first, the report did not establish a criminal conspiracy between Russia and Trump’s campaign, which is undeniably good news for the President; however, the fact that Mueller did not exonerate him on obstruction of justice is pretty remarkable.”

“It’s the kind of thing that might prompt headlines like ‘President May Have Obstructed Justice,’ which is why it’s been a little weird this week to see the good news for the President often shoving aside the bad. That doesn’t normally happen." In it, Trump not being exonerated is clearly stated.

But coverage from Fox News, often criticized for being the propaganda arm of the Trump administration, claimed the investigation that uncovered numerous crimes was a waste. The investigation was about Russian interference in the 2016 election which was clearly established and indictments were made.

This denial of facts prompted Oliver to remark:

"All week long, the president’s supporters took their one piece of good news and rounded it up to two."

Oliver illustrated his point with a montage of Trump's biggest cheerleaders.

“no collusion, no obstruction of justice”

"no collusion, no obstruction, nothing"

"OK, again, Trump was not completely exonerated. In fact, the report literally used the words ‘does not exonerate him.’ The only way Mueller could have been clearer on that point is if he put hand-clap emojis between every word."

Then Oliver made a point many on the right and in conservative media seemed to forget.

"And normally, this is where we would do a deep-dive into the details of the report explaining all the possible implications it may have, the problem is, we still haven’t seen it! Congress hasn’t seen it! Even the president hasn’t seen it!"

Oliver then questioned how reliable that narrator, Barr, is:

"We only know what Trump’s own Attorney General thinks we need to know—a man who, unsolicited, and before he got his current job, sent top DOJ officials a memo ruling out obstruction of justice charges against the President."

"So there are plenty of qualifiers and questions left here, which is why it’s been a little strange to see Trump supporters say things like this…"

@Mediaite Sad that the truth is funny. Forget the Russian Mafia-infested presidential campaign, and the non-stop o… https://t.co/r7bxZpmKxo
— Imelda (@Imelda) 1554125469.0

While many are disappointed that the Mueller investigation into Russian interference in the 2016 election did not provide something it never could have, an immediate end to the Trump presidency, it did find corruption and criminal activity.

"Even if the investigation didn’t conclude that Trump conspired with the Russians, that doesn’t mean the whole thing was a waste of time."

“All of that happened! And we know it one way or another because of Mueller’s investigation!"

And it did not exonerate President Donald Trump.