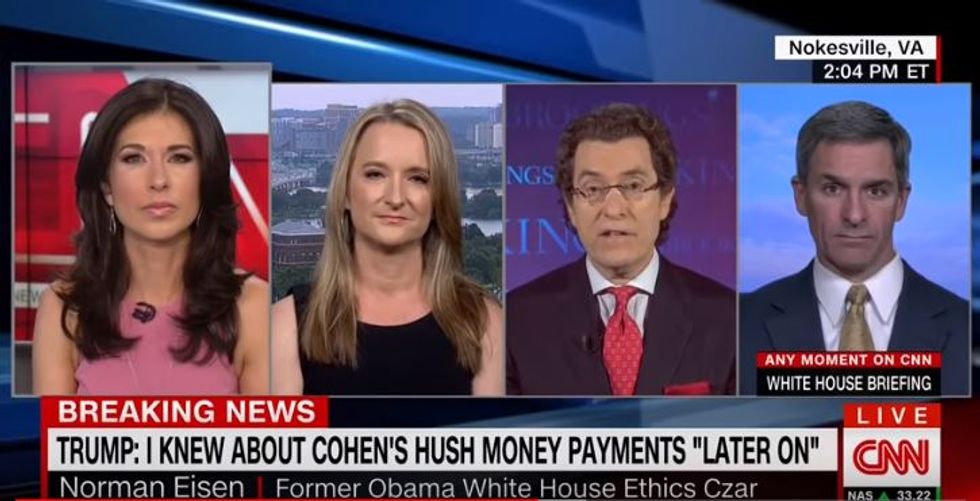 President Donald Trump found himself at the center of even more legal and ethical scandals after his former attorney, Michael Cohen, admitted in court to violating campaign finance laws at the direction of the president.

Trump took to Fox and Friends in an effort to push back against the allegations, but as Obama ethics expert Norm Eisen points out, he may have made things even worse:

In his interview with Ainsely Earhardt, Trump stated that he didn't know about the hush money Cohen paid to two women in exchange for their silence on alleged affairs with Mr. Trump. According to Eisen, Trump did not disclose this on 2017 financial disclosure forms, which is a federal crime in violation of 18 U.S. Code, Section 1001 which prohibits false statements and is punishable with up to five years in prison.

Eisen reiterated his point on CNN:

The president, in his usual clumsy way, has stumbled into another federal crime because he signed his federal financial disclosures under false statements penalty. 18 U.S.C. 1001. Guess what? If you owe somebody money, he just said ‘yes I knew about the payments.’ He repaid Michael Cohen. He had to list that on his forms. He ommitted!

The accusations come as the White House scrambles to distance itself from Cohen's testimony.

Though Cohen's testimony seemed damning to many, the Trump administration still insists that the president did nothing wrong.

I can tell you, as the President has stated on numerous occasions, he did nothing wrong.  There are no charges against him in this.  And just because Michael Cohen made a plea deal doesn’t mean that that implicates the President on anything.

There is no allegation of any wrongdoing against the President in the government's charges against Mr. Cohen. It is clear that, as the prosecutor noted, Mr. Cohen's actions reflect a pattern of lies and dishonesty over a significant period of time.

Giuliani's statement is incorrect, because Cohen stated explicitly that the payments were made "in coordination and at the direction of a candidate for federal office."

Many think these allegations indicate the beginning of the end of the Trump era.

While the evidence against the president seems undeniable, his team is working to spin the allegations as ridiculous. Only time will tell if he'll manage to wriggle his way out of accountability for these as well.