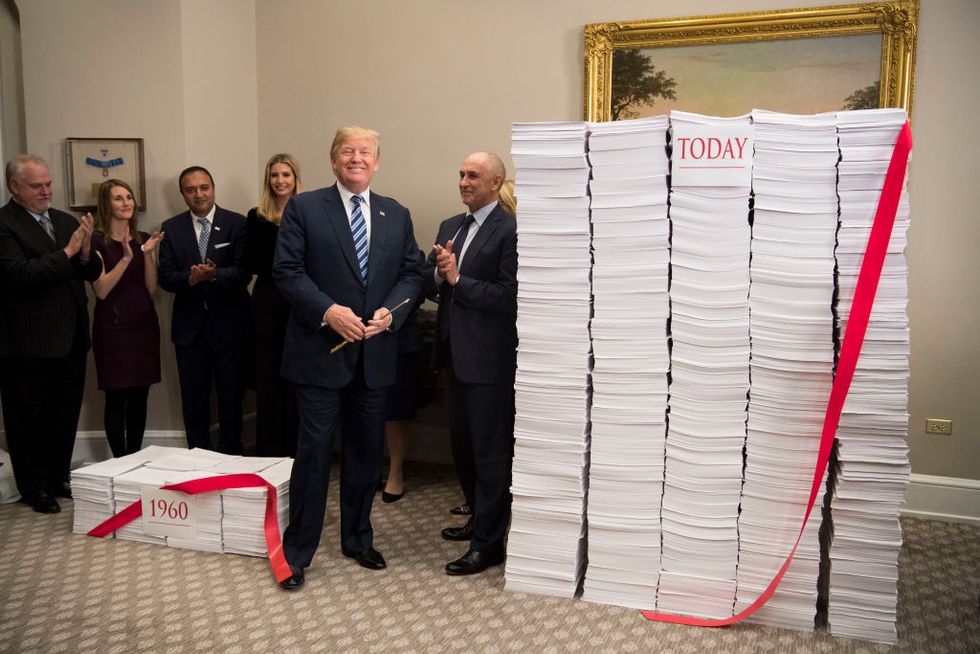 In response to an assumption held by some that President Barack Obama told just as many lies as President Donald Trump has while serving in the Oval Office, The New York Times decided to list and chart Trump's alternative facts so far into his first year. What they found was alarming, yet not too surprising -- Donald Trump told 103 lies in his first ten months as president.

After we published a list of Trump's lies this summer, some of his supporters asked us to compare Trump to other pr… https://t.co/SCUsQLVBYB
— David Leonhardt (@David Leonhardt) 1513255007.0

In comparison, they found that President Barack Obama only told 18 lies in 8 years. That is roughly two lies per year on average. On the other hand, Trump has been a busy Pinocchio, telling an average of 10 lies per month - and he has yet to complete his first year in office. Another way of looking at the comparison is this: while Obama is recorded to have told 18 lies in 8 years as president, Trump told his 18th lie during his third full week in office.

The New York Times applied the same conservative standard to both presidents, including in their lists only "demonstrably & substantially false statements" so as to avoid debate on the veracity of each account. They wrote:

Many Americans have become accustomed to President Trump’s lies. But as regular as they have become, the country should not allow itself to become numb to them. So we have catalogued nearly every outright lie he has told publicly since taking the oath of office.

The Times admits that had they used a "less strict standard," including misleading statements and mild exaggerations from both presidents, Trump would look even worse by comparison. A broader stander that includes misleading statements found that Trump told a lie or falsehood every day in his first 40 days as president.

The Times also excluded any statements that "could be plausibly defended" or have "modest quantitative errors." This last exclusion refers to Trump's difficulty with citing accurate numbers, which he does on a regular basis. In fact, the Washington Postreports that their fact checker recorded Trump making 1,628 "false and misleading claims" in his first 298 days as president.

The Post found that Trump's most repeated lie is targeted at his predecessor: “Obamacare is a disaster. It's virtually dead. As far as I'm concerned, it really is dead.”

President Obama and his administration is a favorite target of Trump when it comes to telling falsehoods. Since taking office, Trump has told at least 10 separate untruths about Obama, according to The New York Times.

Trump also frequently says we are the highest taxed country, which is far from true, and he has delivered a litany of untruths about the Republican tax plan.

All the President's Lies

Trump differs from Obama in other ways when it comes to telling a lie. When Obama became aware of an untruth he was speaking, he stopped and avoided repetition. His lies were exaggerations that tended to make his own policies look better or overstated a problem he was trying to solve.

To the contrary, Trump will double down when caught lying. He tries to discredit whoever is telling the truth -- no matter what authority they have -- until he makes the truth irrelevant. To this end, he has attacked "judges, scientists, F.B.I. or C.I.A. officials, journalists or members of Congress."

As the Times states it, "there is simply no precedent for an American president to spend so much time telling untruths." Though there are far too many to list them all, here are some of the highlights of Trump's many lies:

This is Trump's first lie in office, made on January 21st: “I wasn't a fan of Iraq. I didn't want to go into Iraq.” But in fact, Trump wanted an invasion of Iraq years ago.

He lied about Democrats paying protestors.

He lied about his involvement in the Defense Department's purchase of fighter jets.

He lied when he said refugees are not extensively vetted.

He lied that were millions of illegal votes against him in the 2016 election.

His claims about the murder rate were wildly inaccurate.

Trump also famously attacked the widow of a soldier and a Florida congresswoman, who both claimed he said the soldier knew what he was signing up for.