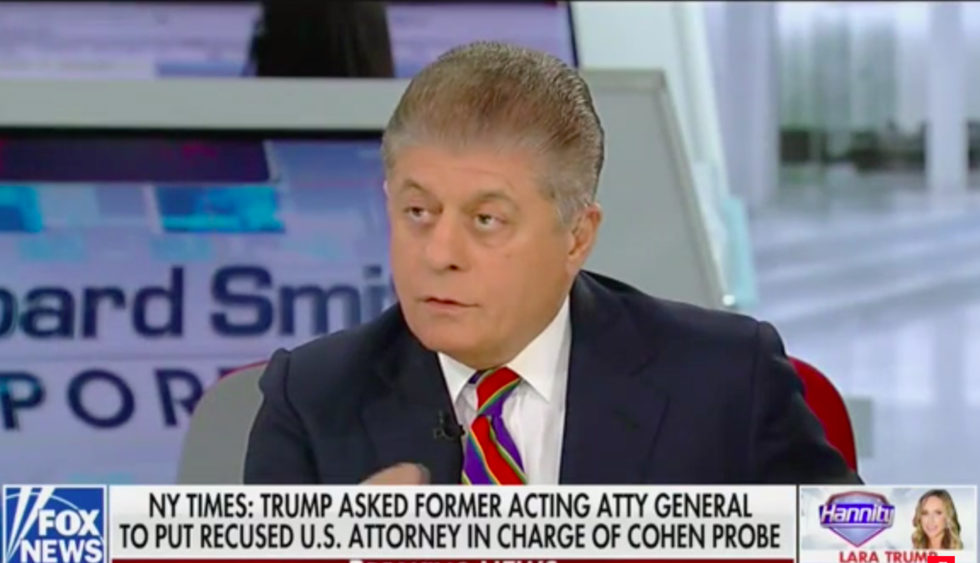 According to Fox News legal analyst Andrew Napolitano, if the report is accurate, then the president is guilty of showing “corrupt intent” and potential obstruction of justice. Whitaker himself could also be in trouble, he said.

“There’s two potential crimes here for Matt Whitaker,” Napolitano said. “One is actual perjury, lying to the Congress. The other is misleading. Remember, you can be truthful but still misleading."

But things look especially bad for the president: “That is an effort to use the levers of power of the government for a corrupt purpose to deflect an investigation into himself or his allies,” Napolitano said.

Asked by Fox News anchor Shepard Smith if the news amounted to obstruction of justice, Napolitano had this to say:

“Yes. Well, attempted obstruction. It would only be obstruction if it succeeded. If you tried to interfere with a criminal prosecution that may knock at your own door by putting your ally in there that is clearly an attempt to obstruct justice.”

Trump has denied that he ever had a conversation with Whitaker about intervening in the federal investigation into hush money payments Cohen made to women who claimed to have had affairs with Trump.

“No, I didn’t,” Trump told reporters at the White House earlier today. “There’s a lot of fake news out there.”

Asked about NYT's report that he inquired with acting AG Whitaker about putting a loyalist in charge of SDNY's inve… https://t.co/pmFvnkQBRI
— Aaron Rupar (@Aaron Rupar) 1550606242.0

But the report nonetheless amplified concerns that the president obstructed justice and opened Whitaker up to further criticism.

This helps explain why Whitaker was so reluctant to talk about his conversations with Trump. Now Whitaker could be… https://t.co/LJeHSjQpug
— Renato Mariotti (@Renato Mariotti) 1550600582.0

This could spell trouble for Matthew Whitaker, who lied before Congress that Trump never pressured him over the var… https://t.co/hT1mevQXlw
— ROSIE (@ROSIE) 1550611452.0

So, Trump asked Whitaker to obstruct justice. That’s a crime. And Whitaker was less than candid about this when he… https://t.co/TlrEzDLW05
— Derek Cressman (@Derek Cressman) 1550610107.0

On February 8, speaking during a House Judiciary Committee hearing, Whitaker denied he ever had any conversations about reassigning or firing anyone with the Manhattan U.S. attorney’s office.

"At no time has the W.H. asked for nor have I provided any promises or commitments concerning the special counsel investigation or any other investigation," he said at the time.

The news prompted Representative Val Demings (D-FL), who asked Whitaker under oath if he'd spoken to the president about the Southern District of New York's case, to call for Whitaker to "clarify his testimony."

The Justice Department, meanwhile, issued a statement that did not directly address whether Whitaker and Trump had ever discussed installing Geoffrey Berman on the New York investigation but noted that Whitaker "stands by his testimony":

“Under oath to the House Judiciary Committee, then Acting Attorney General Whitaker stated that ‘at no time has the White House asked for nor have I provided any promises or commitments concerning the special counsel’s investigation or any other investigation.’ Mr. Whitaker stands by his testimony."

The two attorneys argued that by appointing Whitaker, Trump was “evading the requirement to seek the Senate’s advice and consent for the nation’s chief law enforcement officer and the person who will oversee the Mueller investigation.”

“President Trump’s installation of Matthew Whitaker as acting attorney general of the United States after forcing the resignation of Jeff Sessions is unconstitutional,” the authors continued. “It’s illegal. And it means that anything Mr. Whitaker does, or tries to do, in that position is invalid.”