Republicans Are Scrambling to Pass Another Funding Bill After Trump Demands More 'Border Security', and Nancy Pelosi Just Drew a Line in the Sand 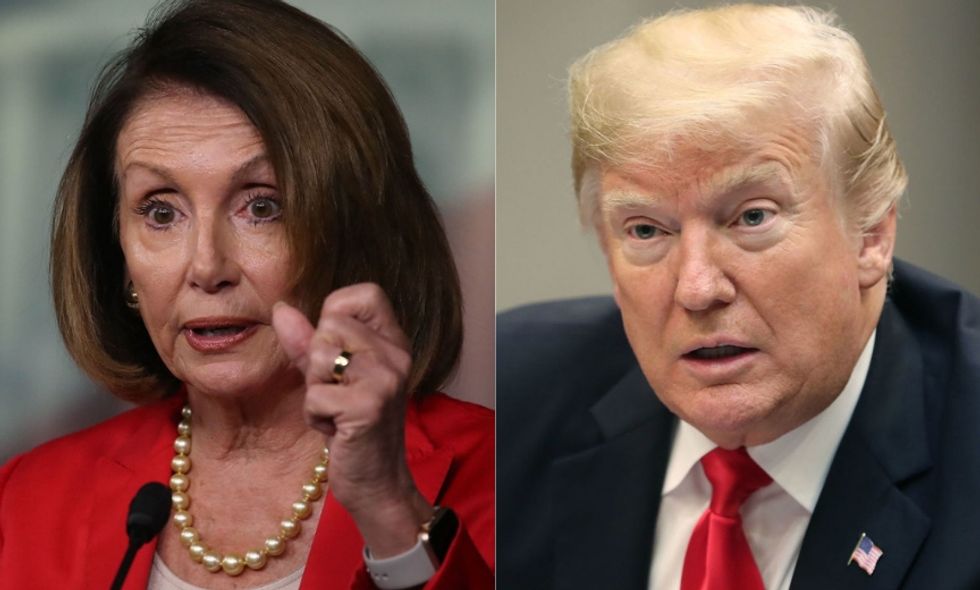 Lawmakers were optimistic that a shutdown would be avoided after President Donald Trump appeared to back down from his insistence on border wall funding and after Congress passed a continuing resolution to keep the government open through February 8.

Those hopes were dashed today after the President told Republican representatives in a closed door meeting that he would not sign the continuing resolution to keep the government open if it didn't provide additional funding for border security.

Congresswoman and likely Speaker of the House Nancy Pelosi (D-CA) made it clear, however, that border funding was not an option.

Some Republicans have floated the idea of bolstering disaster assistance funds to garner Democratic support for a budget with wall funding. When asked if there was a situation in which Democrats would support a deal with greater assistance for disaster relief, Pelosi told reporters:

"It depends on what they have to say, but not wall funding. I think we've made that clear...I mean, we'll see what they come up with in terms of disaster assistance, but in terms of wall funding, that's a nonstarter. I think they know that."

Pelosi and Senate Minority Leader Charles Schumer (D-NY) were similarly adamant in a freewheeling Oval Office meeting earlier this month in which Pelosi warned Trump that he did not have the votes for a wall and that the public does not want a "Trump Shutdown."

With Pelosi's line in the sand and Trump's resurrected insistence on wall funding, Republican lawmakers are scrambling to find a solution before the government is due to shut down on December 21st.

To exacerbate the problem, many lawmakers returned to their states and districts after the stopgap bill to keep the government open passed, presuming the President would remain amenable to passing a budget without border funding. It appears many of these lawmakers have no intention to return to Washington for a vote before the holidays.

"We're down to almost single digits here. This is not a good situation."

@politico Trump is going to shutdown the government his party has total control over because they, in their collect… https://t.co/COv86pPCBZ
— Joe Palmer (@Joe Palmer) 1545330598.0

As Republicans grow more and more frantic to keep the government open, many are saying they should've seen this coming.

Constituents are only surprised that Republicans are surprised.

@kaitlancollins @tedbarrettcnn Wait, she has allowed him as well as her GOP colleagues to run rampant ruining this… https://t.co/8bEkmmc9GE
— Debbie (@Debbie) 1545336547.0

For the President, whose foremost platform on the 2016 campaign was the construction of a border wall, this is a make or break moment that is sure to test the loyalty of his base.

Some Trump supporters are saying that their support for the President is contingent on his willingness to shut down the government until funding for the wall is assured.

If he doesn't get border wall funding and signs that bill anyway I can no longer support that man. We elected Dona… https://t.co/plPRQ4uoSO
— LaunyWest (@LaunyWest) 1545335598.0

@RealJamesWoods You are so right. I will never vote Republican also unless they build the wall. I do not know wha… https://t.co/jVQz8IZLaB
— Johan C DeJong (@Johan C DeJong) 1545321398.0

#dearmrpresident @realDonaldTrump @dbongino @ProducerDenise A letter to President Trump, if you cave in on the $5B… https://t.co/JUiQdfCbfz
— Super Deplorable (@Super Deplorable) 1545228820.0

Meanwhile some of the foremost radical Republicans in media have echoed the sentiments. Ann Coulter said earlier this week that if Trump failed to secure funding for the wall, that she wouldn't vote for him in 2020 and

“Nor will, I think, most of his supporters. Why would you? To make sure, I don’t know, Ivanka and Jared can make money? That seems to be the main point of the presidency at this point.”

The President has stumbled into a predicament in which both options are a loss: he can acquiesce to congressional lawmakers by keeping the government open without wall funding at the risk of losing his previously devoted base, or he can allow the government shutdown he's preemptively taken the blame for.

The clock is ticking and the President must decide how he wants to lose.