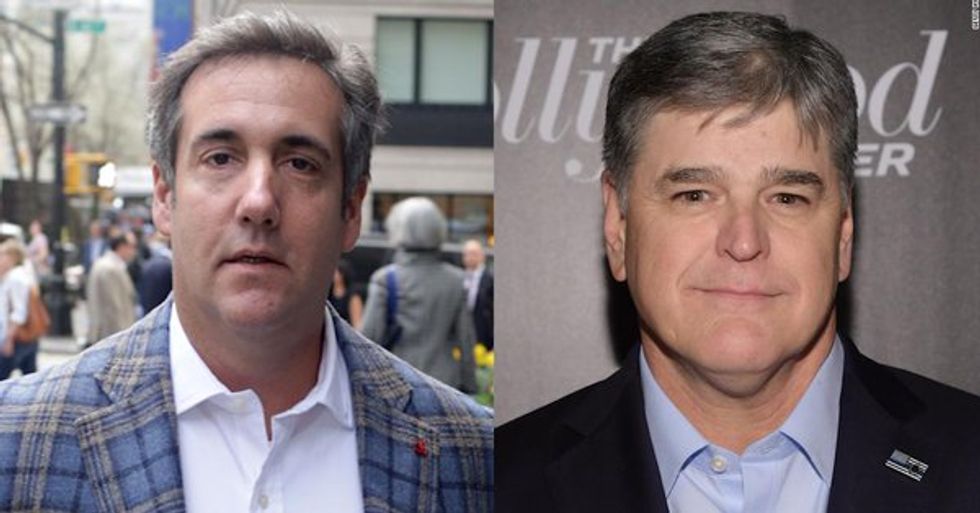 During this afternoon's proceedings, prosecutors revealed that Cohen's alleged mystery third client in the ongoing Trump-Stormy Daniels saga is none other than Fox News pundit Sean Hannity.

Witnesses in the courtroom described hearing "gasps" as the identity of Cohen's mysterious third client was revealed.

At the start of his daily broadcast, Hannity immediately denied having any association with Cohen.

He expanded on these comments on Twitter as well:

Hannity's latest denial that he was ever represented by Cohen is part of a months-long string of defenses of Cohen, who is currently under criminal investigation for a litany of charges including campaign finance violations and bank fraud.

"We have been friends a long time. I have sought legal advice from Michael,” Hannity told Wall Street Journal reporter Rebecca Ballhaus after his attorney-client relationship with Cohen was revealed.

Just reached Sean Hannity to ask if he had any response to being announced as Michael Cohen’s previously unnamed th… https://t.co/ed2D52t18f
— Rebecca Ballhaus (@Rebecca Ballhaus) 1523904834.0

Sean Hannity’s response to being named Michael Cohen’s third client: "We have been friends a long time. I have soug… https://t.co/PlDIijcl8S
— Rebecca Ballhaus (@Rebecca Ballhaus) 1523905036.0

Following the raid on Cohen's home, office, and hotel room last week, Hannity said on his radio show that Cohen told him Trump was unaware of the $130,000 hush money payment to adult film star Stormy Daniels just days before the 2016 presidential election.

I do remember Michael saying it publicly and saying to me at the time that, in fact, he never told the president about this, that it was something that he had pretty wide discretion on his own to handle matters without bringing it to his attention. And it might seem unusual to most people but if you’re a billionaire I guess it’s not.

The next day, Hannity accused Special Counsel Robert Mueller of having "declared war" against Trump, whom Hannity has supported since Trump announced his candidacy in 2015. "Robert Mueller has now officially gone rogue and declared war against the president," Hannity said.

@seanhannity Your objectivity is shot when it relates to your reporting on POTUS and Cohen. #hotairhannity
— abeo (@abeo) 1523911348.0

In addition to making a $130,000 payment to Stormy Daniels, whose real name is Stephanie Clifford, Cohen made an additional $1.6 million payment to a Playboy playmate who was rumored to have gotten pregnant after she and Deputy RNC Finance Chair Elliott Broidy had an affair.

Attorneys for Cohen initially urged the court to maintain the anonymity of their third client.

In a letter filed by Cohen's lawyer Todd Harrison, Cohen's counsel claimed that “more than a dozen electronic devices and other items that include documents and data regarding topics and issues that have nothing to do with” the search warrant issued against Cohen.

@Newsweek It appears that Journalist/broadcaster Sean Hannity has the ultimate conflict of interest when he reports… https://t.co/IXOYqHqadH
— Linda (@Linda) 1523909100.0