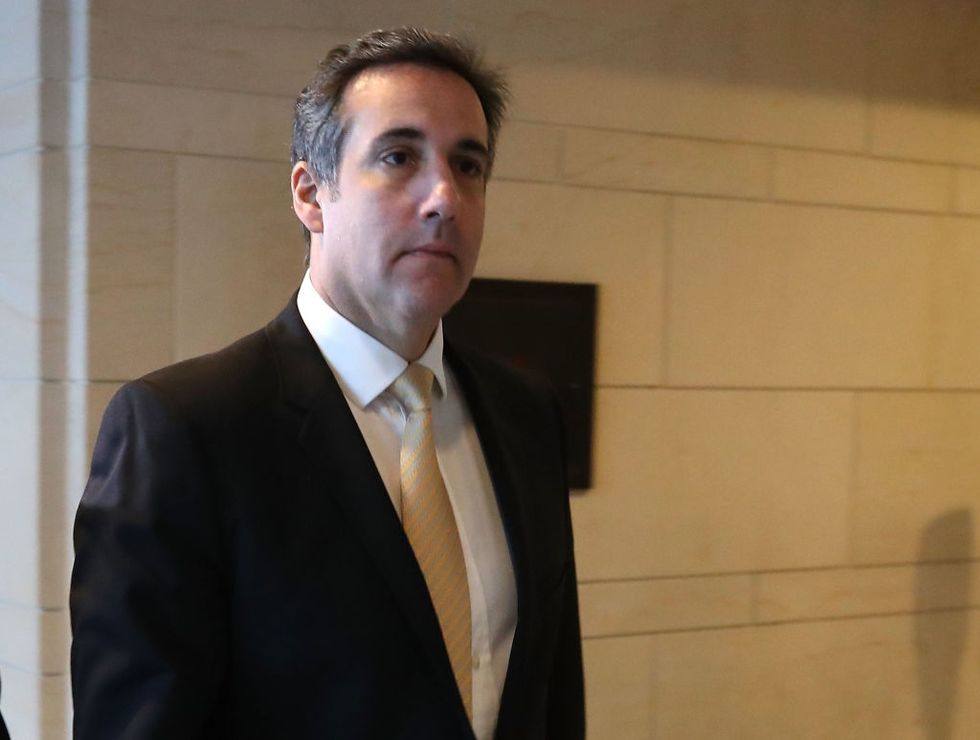 The internet is forever, as social media users demonstrated after resurfacing a 2015 tweet from President Donald Trump's personal attorney Michael Cohen about Hillary Clinton going "to prison," which he tweeted during a Democratic primary debate in a reference to investigations surrounding Clinton's use of a private email server during her tenure as Secretary of State. The tweet in question, which you can read below, became the subject of mockery after FBI agents raided Cohen's Manhattan office yesterday afternoon.

Cohen's tweet mirrors statements made by Michael Flynn, the president's former national security adviser. Flynn, who pleaded guilty to lying to federal investigators about his conversations with the former Russian ambassador to the United States, once led a “Lock her up!” chant about Hillary Clinton at the Republican National Convention.

“You know why we’re saying that?” Flynn asked at the time. “We’re saying that because if I, a guy who knows this business, if I did a tenth, a tenth of what she did, I would be in jail today.”

Federal prosecutors in Manhattan obtained the search warrant after receiving a referral from special counsel Robert Mueller, who oversees the federal investigation into Russian interference during the 2016 presidential election. The New York Times notes that the search does not appear to be directly related to Mueller’s investigation, and is likely the result of “information he had uncovered and gave to prosecutors in New York.”

Since the raid was the result of a "referral" to authorities in the Southern District of New York, analysts believe it's likely related to a crime that Mueller's team uncovered but that is outside the scope of the federal investigation. According to Harry Litman, a former U.S. attorney and deputy assistant attorney general, the way the FBI handled the raid demonstrates the seriousness with which the Department of Justice treats material that might be protected by attorney-client privilege.

"It’s very unusual for the Department of Justice to permit prosecutors to raid an attorney’s office and that’s because you want to be careful not to get privileged material," said Litman.

To get the approval to raid Cohen's office, prosecutors would have had to demonstrate to a federal magistrate both probable cause and the need for a warrant instead of a subpoena. Additionally, the probable cause would have to relate to a crime centered on Cohen, not Trump or someone else. A "taint team" would also be employed to examine materials before they are handed over to prosecutors to make sure that those conducting the case never see anything that might be "tainted" by attorney-client privilege.

Litman notes that there is only one way the prosecution would be permitted to examine any material that might otherwise fall under the attorney-client umbrella: if it is determined to be part of a crime jointly undertaken by the attorney and the client. The taint team would have to get the approval of the court to present the material to the prosecution.

President Trump reacted to the news that the FBI raided the office of his personal lawyer not long after the New York Times broke the story. He did little to hide his anger, and homed in on Mueller and his team when, in fact, raids were authorized by a United States attorney who was appointed by Jeff Sessions, his attorney general:

So, I just heard that they broke in to the office of one of my personal attorneys, a good man, and it’s a disgraceful situation. It’s a total witch hunt. I’ve been saying it for a long time. I’ve wanted to keep it down. We’ve given, I believe, over a million pages worth of documents to the special counsel.

They continue to just go forward and here we are talking about Syria, we’re talking about a lot of serious things with the greatest fighting force ever, and I have this witch hunt constantly going on for over 12 months now, and actually much more than that. You could say it was right after I won the nomination it started.

And it’s a disgrace, it’s frankly a real disgrace. It’s an attack on our country in a true sense. It’s an attack on what we all stand for. So when I saw this and when I heard it — I heard it like you did — I said that is really now in a whole new level of unfairness. So this has been going on, I saw one of the reporters who is not necessarily a fan of mine, not necessarily very good to me, he said in effect that this is ridiculous, this is now getting ridiculous. They found no collusion whatsoever with Russia, the reason they found it is there was no collusion at all. No collusion.

The president then railed against Hillary Clinton and the Democratic Party. He has often claimed that the investigation into Russian interference is a political ploy––possibly a conspiracy––orchestrated by the opposition party:

They only keep looking at us. So they find no collusion, and then they go from there and they say, “Well, let’s keep going,” and they raid an office of a personal attorney early in the morning and I think it’s a disgrace.

So we’ll be talking about it more, but this is the most conflicted group of people I’ve ever seen. The attorney general made a terrible mistake when he did this, and when he recused himself, or he should have certainly let us know if he was going to recuse himself and we would have used a — put a different attorney general in. So he made what I consider to be a very terrible mistake for the country, but you’ll figure that out.

After a brief pivot to a discussion of the Syrian conflict, a reporter asked the president if he has "any concerns about what the F.B.I. might find."

"Do you have any concerns?"

"No, I’m not," the president responded.

The president then ignored a question about whether he had an affair with Stephanie Clifford, but did respond when another reporter asked him, "Why don't you just fire [Robert] Mueller?"

"Well, I think it’s a disgrace, what’s going on," Trump replied. We’ll see what happens. But I think it’s really a sad situation when you look at what happened. And many people have said you should fire him. Again, they found nothing and in finding nothing, that’s a big statement."

The president further railed against the raid on Twitter earlier this morning, calling it "A TOTAL WITCH HUNT", and claiming that attorney-client privilege is "dead."