Rudy Giuliani Went After Stormy Daniels Again, and Her Lawyer Just Eviscerated Him on CNN 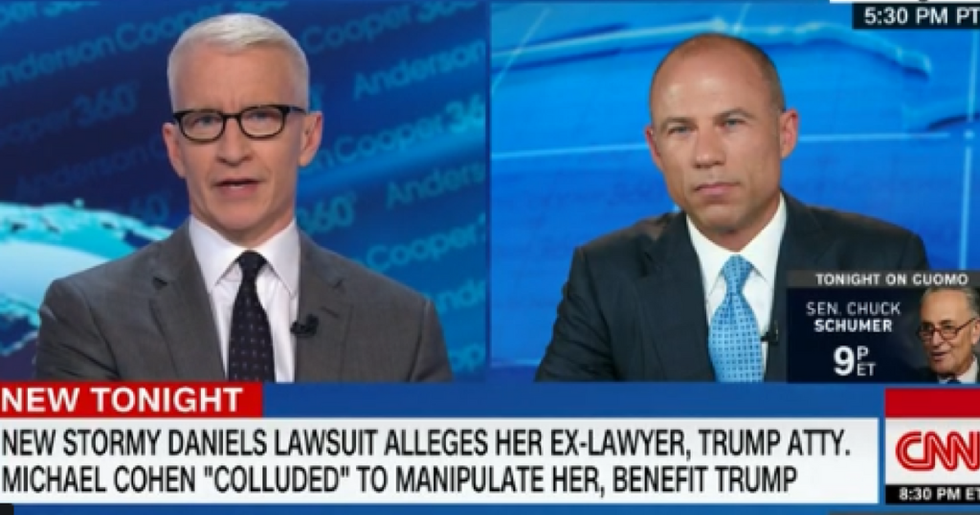 Explain to me how she could be damaged. I mean, she has no reputation. If you're going to sell your body for money, you just don't have a reputation. I may be old-fashioned, I dunno.

Giuliani added that he does respect women who star in adult films, just not in "the way I respect a career woman or a woman of substance or a woman who ... isn't going to sell her body for sexual exploitation."

Appearing on AC 360 on Wednesday night, Avenatti tore into Giuliani, calling him "an absolute pig for making those comments."

"He's basically stating that women that engage in the adult film industry and other forms of pornography don't have reputations and are not entitled to respect," Avenatti told host Anderson Cooper.

Avenatti said President Donald Trump should fire Giuliani over his remarks, which he called "piggish" and "outrageous."

I certainly hope that we are not going to reach a place where Rudy Giuliani is going to be the police who is going to decide which women deserve respect or not. His comments are piggish, they are outrageous especially in today's day and age and he should be fired immediately by the President.

Mr. Giuliani is a misogynist. His most recent comments regarding my client, who passed a lie detector test and who… https://t.co/pmie3Iyqcv
— Michael Avenatti (@Michael Avenatti) 1528308032.0

Early Thursday morning, Avenatti tweeted that his client "should be celebrated for her courage, strength, and intelligence."

My client @StormyDaniels should be celebrated for her courage, strength and intelligence. She is one of the most cr… https://t.co/ZjRwUDGkSN
— Michael Avenatti (@Michael Avenatti) 1528346467.0

Avenatti and Giuliani have been sparring in the months since Trump hired Giuliani to represent him in Special Counsel Rober Mueller's investigation into Russian collusion.

Meanwhile, Avenatti represents Clifford in several lawsuits she has mounted against Trump, with whom she claims to have had an affair in 2006.

Clifford is also suing Trump's former attorney and fixer, Michael Cohen, as well as her former lawyer, Keith Davidson, for failing to properly represent her in a non-disclosure agreement she signed with Cohen on behalf of Trump. Clifford also received $130,000 in hush money through the NDA.

Last month, Giuliani referred to Avenatti as an "ambulance chaser" who is only after money.

“What do you think she (Clifford) is about, and her lawyer (Michael Avenatti), who’s an ambulance chaser?” Giuliani asked host Maria Bartiromo on Fox Business Network’s Mornings with Maria.

the only “ambulance” I have ever chased in my career is the one you are driving right now in a desperate attempt to save this presidency.