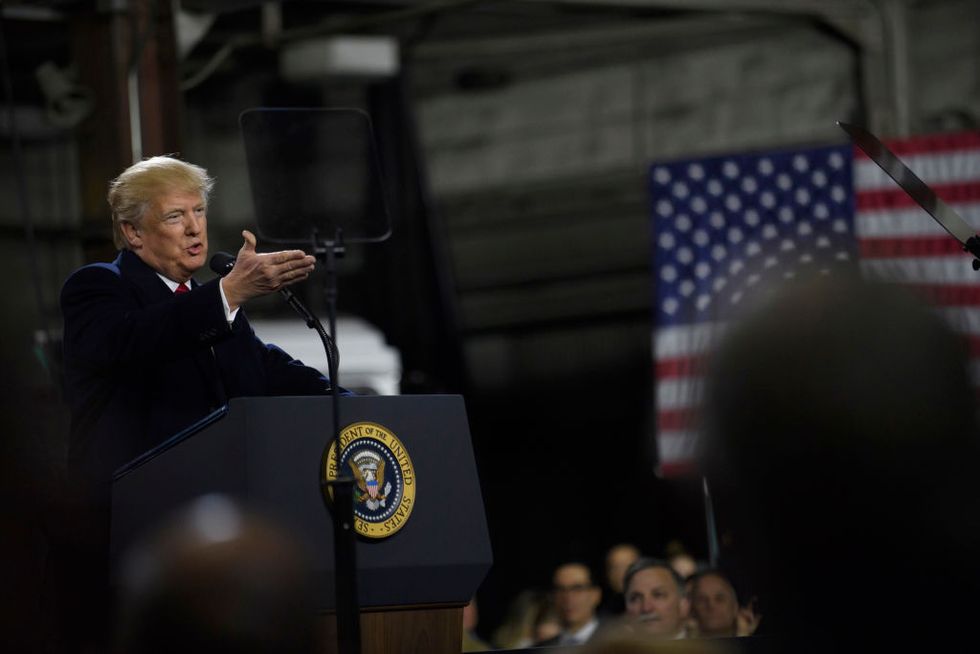 CORAOPOLIS, PA - JANUARY 18: President Donald Trump speaks to supporters at a rally at H&K Equipment, a rental and sales company for specialized material handling solutions on January 18, 2018 in Coraopolis, Pennsylvania. Trump visited the facility for a factory tour and to offer remarks to supporters and employees following the administration's new tax plan. (Jeff Swensen/Getty Images)

Call the White House comment line at 202-456-1111. You'll be greeted with an answering machine message saying the phone line is closed because Democrats are "holding government funding hostage."

If that sounds like a Republican campaign ad, you'd be right. People who called the White House House comment line over the weekend discovered the automated voicemail was repeating the following message:

Thank you for calling the White House. Unfortunately, we cannot answer your call today because congressional Democrats are holding government funding — including funding for our troops and other national security priorities — hostage to an unrelated immigration debate.

Due to this obstruction, the Government is shut down. In the meantime, you can leave a comment for the president at www.whitehouse.gov/contact. We look forward to taking your calls as soon as the Government re-opens.

You can listen to it below:

Criticism was harsh and swift.

But the White House voicemail says it was the Democrats holding military money hostage over a non connected immigra… https://t.co/kqPGfCcwH1
— Wyatt (@Wyatt) 1516630402.0

.@WhiteHouse your message is false, childish, dangerous and should be illegal. You have shown what this Administra… https://t.co/DT3DuzkCLB
— kim (@kim) 1516482788.0

The White House message follows an unsuccessful vote to extend government funding for a month while Republicans and Democrats broker the terms of a long-term spending bill. As Second Nexusreported on Friday, the House "pressed ahead with plans for a vote Thursday for funding until Feb. 16, providing time to work out deals on military and domestic spending and other issues including immigration" but "the stopgap spending proposal ran into roadblocks in the Senate." Democrats say any bill must include protections for "Dreamers," undocumented immigrants brought to the U.S. as children.

If a stopgap proposal is not approved, government workers cannot be paid. As such, non-essential services including major landmarks, much civilian military personnel, and White House phone lines are unmanned while government employees go on an unpaid furlough until a budget or temporary spending authority exists.

"Senate Democrats own the Schumer Shutdown. Tonight, they put politics above our national security, military families, vulnerable children, and our country's ability to serve all Americans," Sanders said, referring to Senator Chuck Schumer (D-NY) in a statement.

She cautioned that negotiations over the Deferred Action for Childhood Arrivals (DACA) would cease until a spending bill is approved, saying that the Trump administration "will not negotiate the status of unlawful immigrants while Democrats hold our lawful citizens hostage over their reckless demands."

It might be in the administration's best interest to negotiate, however.

Sources inside the White House say that President Donald Trump has expressed a willingness to support legal status for Dreamers in exchange for full funding of his border wall––one of his signature campaign promises––at a cost of about $20 billion over seven years. The sources say the president would agree to such a deal even if it meant giving up Republican hopes to end the visa lottery system and restrict so-called chain migration.