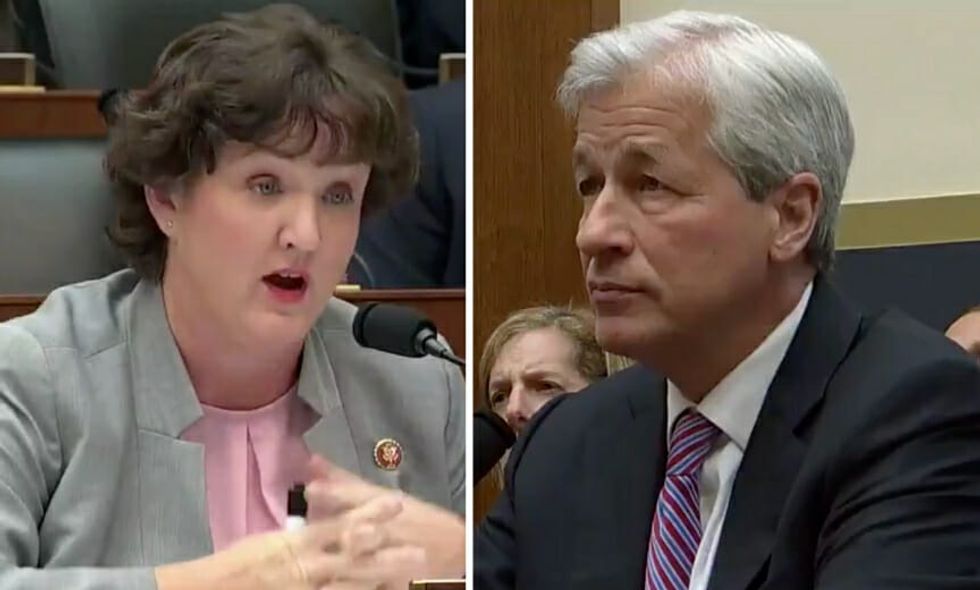 Ten years after the end of the Global Financial Crisis—in which the worldwide financial market stood to crumble, partly due to the greed of oligarchic banks—the House Financial Services Committee invited seven CEOs of the world's largest banks to answer questions in a hearing on income inequality.

Among these CEOs was billionaire Jamie Dimon, the CEO of JPMorgan Chase.

Though he may be the head of one of the most powerful banks in the world, he met his match when answering questions by Congresswoman Katie Porter (D-CA). Porter told the story of a single mother in her state who works as a local Chase bank teller, making just over $29 thousand annually.

Porter laid out the teller's living expenses, including the cheapest options for a phone and food. The woman Porter describes still falls $567 short each month, not including medical or clothing or school lunch expenses.

“My question for you, Mr. Dimon," Porter asked, "is how should she manage this budget shortfall while she’s working full-time at your bank?”

Initially, Dimon said he wasn't sure the numbers were accurate, before saying he'd "have to think about" how the employee should make end's meet. Dimon said, "She could have my job one day," but Porter spotted the uselessness of the platitude immediately:

Dimon didn't know whether the woman should overdraw in paying for expenses or take out a Chase credit card and run a deficit, he offered to call the woman in question and see if he could offer help, to which Porter said:

"I appreciate your desire to be helpful, but what I'd like you to do is provide a way for families to make end's meet."

After the exchange, Porter addressed Dimon's skepticism of her math.

@RepKatiePorter @jpmorgan You are an incredible asset to the House. Thank you for your hard work and razor-sharp, fact-based questioning!
— Martha (@Martha) 1554948837.0

During the financial crisis, Chase took over multiple failed banks along with billions of dollars of loans, which Dimon assured in a memo wasn't out of greed:

"Counter to what most people think, many of the extreme actions we took were not done to make a profit; they were done to support our country and the financial system."

But many were skeptical after hearing his answers to Porter.

If Representatives like Porter keep holding billionaires like Dimon accountable for the conditions of their employees, maybe they and the boards of these banks will take more consideration when deciding how much they need to live.