Judge Just Ruled That Lawsuit Against Donald Trump for Profiting Off the Presidency Can Move Forward, and He Cited One of Trump's Own Tweets in Ruling 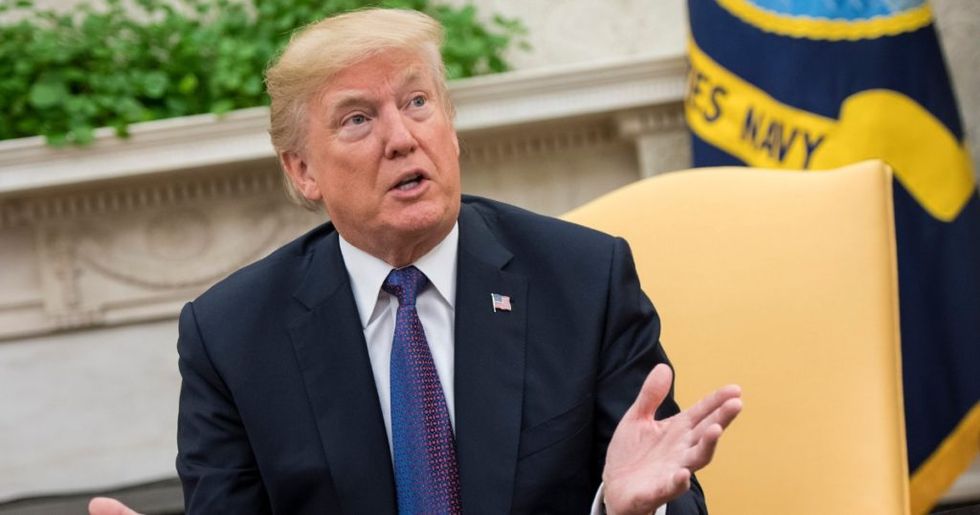 U.S. District Judge Peter Messitte ruled that a landmark lawsuit against President Donald Trump can proceed. The lawsuit, filed by the attorneys general of Maryland and Washington, D.C.,  accuses the president of violating the emoluments clause of the Constitution, which bars U.S. officials, elected or appointed, from accepting gifts or payments from foreign entities without receiving congressional approval.

Although the Justice Department argued that the lawsuit should be dismissed because it would be too much of a “distraction” for Trump while he runs the country, Messite noted that the “president himself appears to have had little reluctance to pursue personal litigation despite the supposed distractions it imposes upon his office.”

He cited one of the president's tweets, issued in August, in which he challenged former CIA Director John Brennan––one of his more prominent critics––to sue him.

He also pointed out that Trump has had no qualms about going to court over issues related to the publication of tell-all books by reporter Michael Wolff and adult film actress Stormy Daniels, or his sparring with former White House strategist Steve Bannon:

Messite adds that "the most the President can say is that if he is required to respond to civil discovery, he would be ill-served":

But as Plaintiffs point out, most of what they seek is discovery from third parties, e.g., the Trump International Hotel, which would seem unlikely to impose any meaningful burden on the President individually. See Report of Rule 26(f) Planning Meeting (Sept. 14, Case 8:17-cv-01596-PJM Document 135 Filed 11/02/18 Page 28 of 31 -29- 2018), ECF No. 132. And, of course, “mere injuries, however substantial, in terms of money, time, and energy necessarily expended in the absence of a stay, are not enough.” Long v. Robinson, 432 F.2d 977, 980 (4th Cir. 1970) (internal quotation omitted). The President’s argument that he would be distracted would seem to apply to any litigant who has been sued. Yet Presidents have unquestionably responded to court orders, as in this case, and have also had extensive interactions with the court system.

The suit contends that Trump is profiting from his Trump International Hotel in D.C. and that foreign leaders have leveraged bookings and parties at the space to curry favor with the president. Trump’s “apparent receipt of benefits from at least some foreign and state governments ... suggest that he has received ‘emoluments’ in violation of the Constitution,” Messite wrote, noting that foreign governments have “have explicitly stated that they are patronizing the Trump International Hotel precisely because the President, in effect, owns it."

Moreover, Messite wrote, it “appears likely” in some cases that “payments to his hotel are being made with an expectation of favorable treatment by the President in matters of foreign policy.”

The news is considered a blow to the president, who is counting on Republicans to maintain their majority in today's midterm elections.

The judge in the emoluments clause case cited this tweet from @realDonaldTrump to reject Trump's argument that any… https://t.co/DBIGMJRqN5
— David Fahrenthold (@David Fahrenthold) 1541184595.0

The legal watchdog group Citizens for Responsibility and Ethics in Washington (CREW) filed a federal lawsuit in the Southern District of New York shortly after Trump's inauguration in January 2017. The group accused Trump of violating the Constitution by allowing his businesses to accept payments from foreign governments.

“The foreign emoluments clause of the Constitution prohibits Trump from receiving anything of value from foreign governments, including foreign government-owned businesses, without the approval of Congress,” CREW said in a press release, adding that its lawsuit requests the court to issue a judgment defining elements of the Foreign Emoluments Clause that the new president’s interests do or will violate, and an injunction forbidding him from accepting such payments.

Trump has refused to divest his businesses, the group continued, pointing out that Trump “is now getting cash and favors from foreign governments, through guests and events at his hotels, leases in his buildings, and valuable real estate deals abroad.” Moreover, his “acceptance of any benefits” from governments he does business with––China, India, Indonesia, and the Philippines among them––directly violate the Constitution.

“As a direct result of [Trump]’s purposeful refusal to acknowledge that he is submerged in conflicts of interest and his purposeful refusal to take precautions necessary to avoid those conflicts,” the lawsuit alleges, “[he] is now committing and is poised to continue to commit many violations of the Foreign Emoluments Clause — some documented, and others not yet apparent due to the complex and secretive nature of [Trump]’s business holdings — during the opening moments of his presidency and continually thereafter.”

In addition to investments or planned business dealings in 10 foreign countries, CREW’s lawsuit mentions the leases held by the Industrial and Commercial Bank of China and the Abu Dhabi Tourism & Culture Authority at Trump Tower in New York and foreign diplomats’ stays and foreign embassies’ events at Washington’s Trump International Hotel. Merely processing the suit could prove embarrassing for the president and his administration, particularly if the lawsuit successfully extracts details from the private files of the Trump Organization.