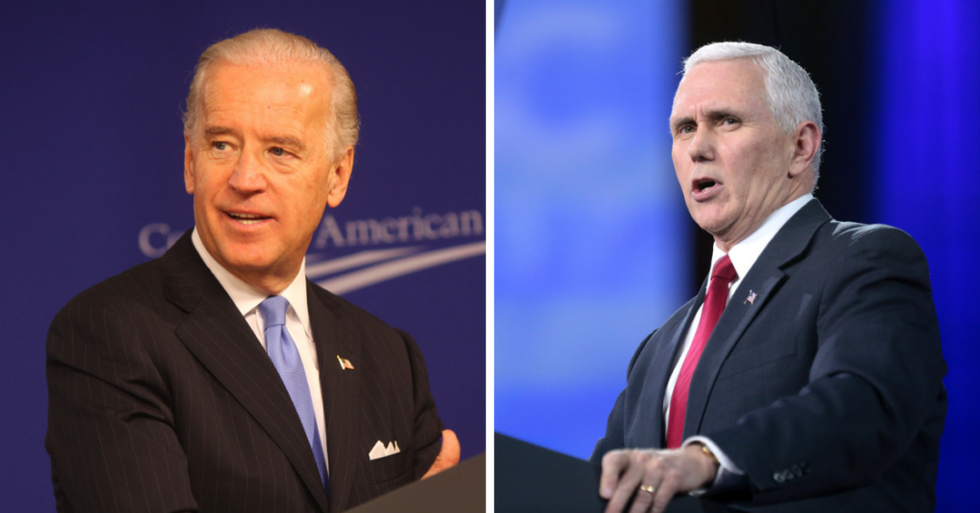 "The fact of the matter is it was followed on by a guy who's a decent guy, our vice president, who stood before this group of allies and leaders and said, 'I'm here on behalf of President Trump,' and there was dead silence. Dead silence," Biden said during an appearance at the Chuck Hagel Forum in Global Leadership at the University of Nebraska at Omaha, referring to the reaction to Pence's speech at the Munich Security Conference in February.

Biden chose to walk back his comments after his fellow Democrats, including actress and activist Cynthia Nixon, accused him of complimenting a politician whose animus toward the LGBT community has been well documented.

Biden soon responded, saying that while he was "making a point" about Pence in a "foreign policy context," there is "nothing decent about being anti-LGBTQ rights, and that includes the Vice President."

@CynthiaNixon You’re right, Cynthia. I was making a point in a foreign policy context, that under normal circumstan… https://t.co/z7sb1rrgER
— Joe Biden (@Joe Biden) 1551397063.0

Nixon said she appreciated Biden's reply, but urged him to consider that Pence's "dehumanizing of our community disqualifies" him "for the honorific of 'decent,' regardless of the context."

@JoeBiden Thanks @JoeBiden. Appreciate the response. But please understand from where we sit, his dehumanizing of o… https://t.co/fEIJUyIEPt
— Cynthia Nixon (@Cynthia Nixon) 1551401484.0

Others also asserted that Pence, who among other things supported a measure to add an amendment banning same-sex marriage to Indiana’s Constitution and sparked a boycott of his state after he signed the Religious Freedom Restoration Act in a closed-door session, is by no means a "decent" guy to the LGBTQ community or other marginalized groups.

Nice to see Joe Biden reach across the aise to join hands with Mike Pence so that together they can electrocute a g… https://t.co/J6rv63ATE6
— Jules Suzdaltsev (@Jules Suzdaltsev) 1551398044.0

As speculation grows over Biden weighing a presidential run, he has made news in recent weeks for promoting his relationships with Republicans. He recently referred to the late Senator John McCain (AZ) as "my brother" and to former Defense Secretary William Cohen as "my buddy."

He also referred to Pence as a "decent guy" before––that was during a rally in St. Charles, Illinois––though he clarified during that appearance that he doesn't agree with many of Pence's policy positions. Last year, he used the same honorific to describe then-House Speaker Paul Ryan, though he added, "he just read too much Ayn Rand."

According to Brenda Kole, an Iowa-based Democratic operative who advised Hillary Clinton's 2008 and 2016 presidential campaigns, Biden needs to be cautious and not risk losing the support of Democrats he might need to win a primary.

“He has to be careful not to run too much of a potential general election campaign before he even gets in the primary race,” she said.

“The idea that he is someone who has Republican friends and can have good bipartisan relationships is baked into the Joe Biden brand," she observed. “I don’t think that comes with the attendant risks that it would for newcomers."

Earlier this week, Biden said he is "very close" to a decision on whether to run in 2020.

"The first hurdle for me was deciding whether or not I am comfortable taking the family through what would be a very, very very difficult campaign," Biden told presidential historian Jon Meacham at the University of Delaware on Tuesday.

His family, he added, has given him their blessing:

"There is a consensus that they want me to run... We do everything by family meetings, because no man or woman has a right to run for public office without it being a family decision."

"No matter who runs — it's a very difficult campaign," Biden added. "The primary will be very difficult. And the general election, running against President Trump, I don't think that he's likely to stop at anything, whomever he runs against."