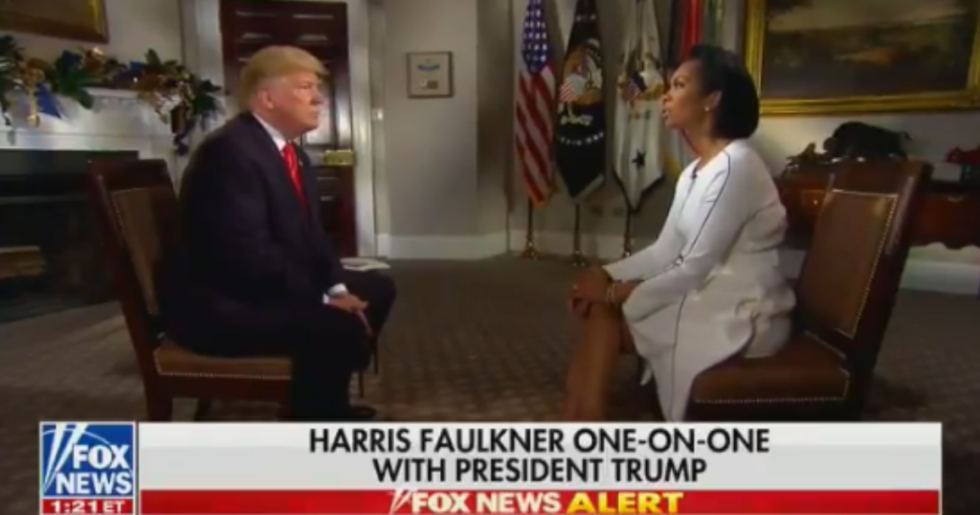 Fox News reporter Harris Faulkner on Thursday got dragged on Twitter for her ultra-softball interview with President Donald Trump.

Faulkner challenged Trump to what she called "a few rapid-fire questions," which were anything but the sort.

"What do you love about being president?" Faulkner asked.

"I love getting things done for the people," Trump replied right before whipping out the victim card. "It's a nasty job because I get hit so hard and so unfairly by so many."

Trump then falsely claimed that carbon emissions have decreased (they have not), prompting Faulkner to say that his "critics see things differently." That was as far as fact-checking went.

Check out this adversarial journalism from Harris Faulkner: "What do you love about being president?" "When you g… https://t.co/8kpmVXYVwZ
— Justin Baragona (@Justin Baragona) 1544725644.0

Twitter was not having it. Then again, Fox News.

But wait, it gets even better.

"When you get up in the morning...what do you love?" Faulkner then asked. Trump proceeded to malign the Paris Climate Accord, saying (incorrectly) it would have cost the United States "trillions of dollars for nothing" (yeah, except saving the planet).

The bar is so low.

this trump interview on fox is embarrassing, even for fox news. harris faulkner is supposed to be one of their "rea… https://t.co/j8A1UgvMRN
— Oliver Willis (@Oliver Willis) 1544724466.0

"You have such energy for this," Faulkner beamed. "Not every president would have worked 6 or 7 days out on the campaign trail."

Rumor has it that Sniffles is an Adderall fan.

Really? Trump showed up to work at noon on Wednesday. And last week, the president took an eight-car motorcade from the White House to the Blair House - a distance of 250 yards.

We remember... not to mention his executive time every morning.

Trump is planning on spending 16 days at Mar-a-Lago for Christmas.