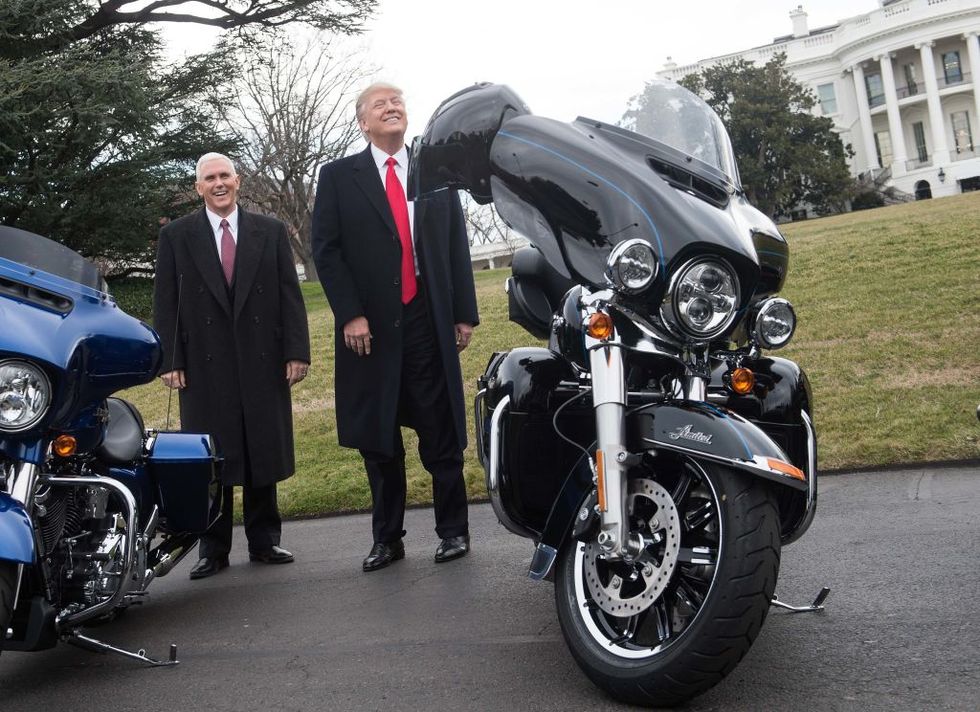 TOPSHOT - US President Donald Trump jokes with reporters after greeting Harley Davidson executives and union representatives on the South Lawn of the White House in Washington, DC, on February 2, 2017 prior to a luncheon with them. / AFP / NICHOLAS KAMM (Photo credit should read NICHOLAS KAMM/AFP/Getty Images)

American workers have not benefited from President Donald Trump's corporate tax cuts, and motorcycle maker Harley-Davidson, which the president has lauded as an example of business success, is perhaps the most prominent example.

In January, the company told Kansas City workers it would close a plant there, a net loss of 350 jobs. Mere days later, the company announced a dividend increase––and a stock buyback plan to repurchase 15 million of its shares. Those shares are worth about $696 million.

The announcement of the closure blindsided union representatives, saidGreg Tate, a staff representative for the United Steelworkers District 11, which represents about 30 percent of the Harley-Davidson plant’s workers.

“We really never had any belief that they were going to shut the Kansas City facility down,” Tate said. The announcement was “the first anyone found out about it.”

Tate notes that Harley-Davidson's decision to hire a casual workforce (temp workers who would boost production during peak season) will be easier and cheaper for the company.

This is a decision we did not take lightly. The Kansas City plant has been assembling Harley-Davidson motorcycles since 1997, and our employees will leave a great legacy of quality, price, and manufacturing leadership. We are grateful to them and the Kansas City community for their many years of support and their service to our dealers and our riders.

The GOP tax plan slashed the corporate tax rate to 21 percent from 35 percent. Proponents of the plan insisted companies would use the windfall to increase their investments in labor or business expansions. The opposite is true: Companies are outsourcing jobs and paying shareholders.

In fact, a recent analysis found that corporate stock buybacks hit a record $178 billion in the first three months of 2018. By contrast, average hourly earnings for American workers are up 67 cents over the past year. Harley Davidson makes about $800 million to $1 billion in pre-tax profit, according to Seth Woolf, an analyst at North Coast Research.

Rick Pence, a worker at the closing Harley-Davidson plant, said the tax cuts only added "$16, 17 more a week" to his paycheck.

"But now Harley's giving me one heck of a tax cut," he noted rather sardonically, "because I won't have no income at all next year and my tax will be zero."

"Tax reform can put American manufacturers and American companies like Harley-Davidson on a much better footing to compete in the global economy and keep jobs here in America,” Ryan told workers and company leaders at the time.

The president met with Harley-Davidson executives and union representatives in February 2017. At the time, he predicted the company's operations would grow.

“I think you’re going to even expand — I know your business is now doing very well, and there’s a lot of spirit right now in the country that you weren’t having so much in the last number of months that you have right now,” Trump said at the time, adding that “taxing policies,” health care, tariffs, and trade would improve business prospects.

Harley-Davidson is also shifting production to Thailand, a decision the company made as a result of the president's move to withdraw from the Trans-Pacific Partnership.

Harley Davidson’s CEO Matt Levatich said building a Thai plant was a “plan B” in the event Trump pulled out of the TPP. The agreement “would have helped us a lot,” Levatich said.

Free trade agreements like the TPP and NAFTA are crucial to expanding American export markets and improving working conditions, which, albeit slowly, raises standards of living and promote human rights in developing nations.

The president has railed against the TPP since its inception in 2015, saying it makes the U.S. less competitive and that American manufacturing has been “hit hard” by previous trade agreements. Last week, Trump indicated he would reconsider a revised version of the TPP “if they deal were substantially better than the deal offered to President Obama.” Obama signed the agreement on February 4, 2016.

"We would rather not make the investment in that facility, but that’s what’s necessary to access a very important market," Levatich said of the Thailand plant. "It is a direct example of how trade policies could help this company, but we have to get on with our work to grow the business by any means possible, and that’s what we’re doing."