Trump's Diversion of Defense Funds to the Border Is Already Harming the Military, and a Top General Just Leaked Memos to Expose It 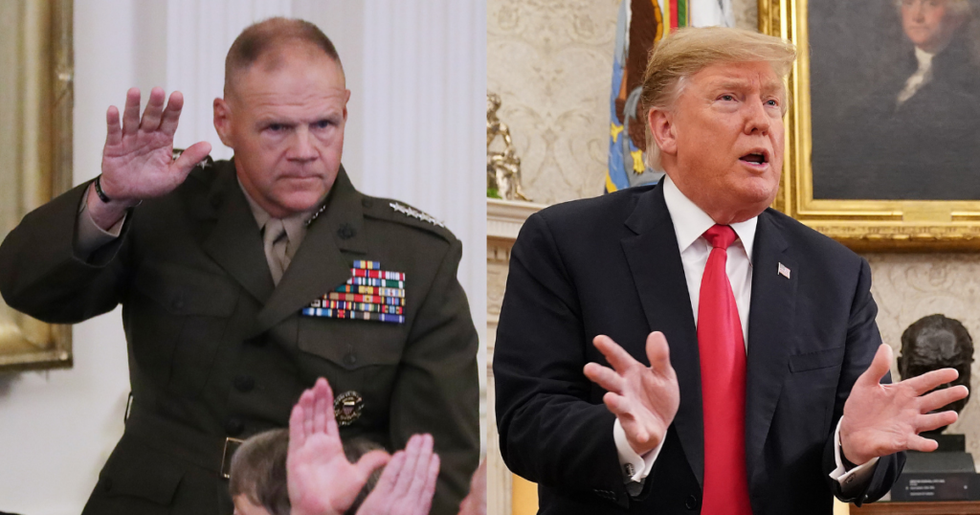 A member of President Donald Trump's top military brass has been leaking memos to the press in order to highlight the harm Trump's border fiasco is imposing on troop readiness and families , Newsweek reported on Wednesday.

The letters detail how Trump's “unplanned/unbudgeted” demands for border security, including the president's plan to send more troops to the border, represent an “unacceptable risk to Marine Corps combat readiness and solvency.”

“The combat readiness of II Marine Expeditionary Force—1/3 the combat power of the Marine Corps—is degraded and will continue to degrade given current conditions," Neller wrote in letters to Acting Defense Secretary Patrick Shanahan and Navy Secretary Richard Spencer.

Neller noted the seriousness of the situation:

"As I highlighted in the enclosed 19 Feb 2019 memorandum to the acting Secretary of Defense through you, 'the effects of internal funding will rapidly accelerate throughout the rest of the Marine Corps as we realign funding of exercise plans, unit training, equipment readiness accounts, and investment accounts.' That assessment, from less than one month ago, was made given the assumption that we would be able to realign funding to rebalance risk to address the unplanned/unbudgeted conditions listed above through the regular order practice of above-threshold reprogramming. However, it is becoming increasingly unlikely that we will be able to reprogram funds in year of execution."

Neller also outlined "the inability to reprogram money and the lack of a supplemental" disaster recovery plan for Hurricane Florence, which inflicted “extensive damage to 913 military structures; 3,748 homes; infrastructure to include railways, roads, and the power grid; and to training areas” in North Carolina in 2018. Florence is estimated to have caused $17 billion in damage in North Carolina alone.

“The hurricane season is only three months away,” Neller wrote, “and we have Marines, Sailors, and civilians working in compromised structures.”

Instead of being allocated to fixing the bases, resources were diverted to handle the president's so-called border crisis.

Neller "didn’t want the Marines and families at Camp Lejeune [in North Carolina] to get f***ed," one official said of why the commandant would allow the release of the memos.

This is a pretty remarkable situation.

Neller is standing up to Trump and we are here for it.

@JimLaPorta @Newsweek It is unbelievable how much Trump is sabotaging the country, from it's policies straight on d… https://t.co/GFtxtfa4Mw
— LilJerseyGirlLost (@LilJerseyGirlLost) 1554311215.0

Reminder that the "national emergency" is a figment of Trump's imagination.

@JimLaPorta @iAmTheWarax @Newsweek There is no sane or legally viable reason to have US troops at the border in the first place...
— Mark P.E. McClane (@Mark P.E. McClane) 1554311964.0

"I didn't need to do this," Trump said shortly before signing the emergency declaration in February.