'Fox and Friends' Host Tried to Slam Barack Obama Over the Economy, Got Fact-Checked in Real Time by His Own Co-Host 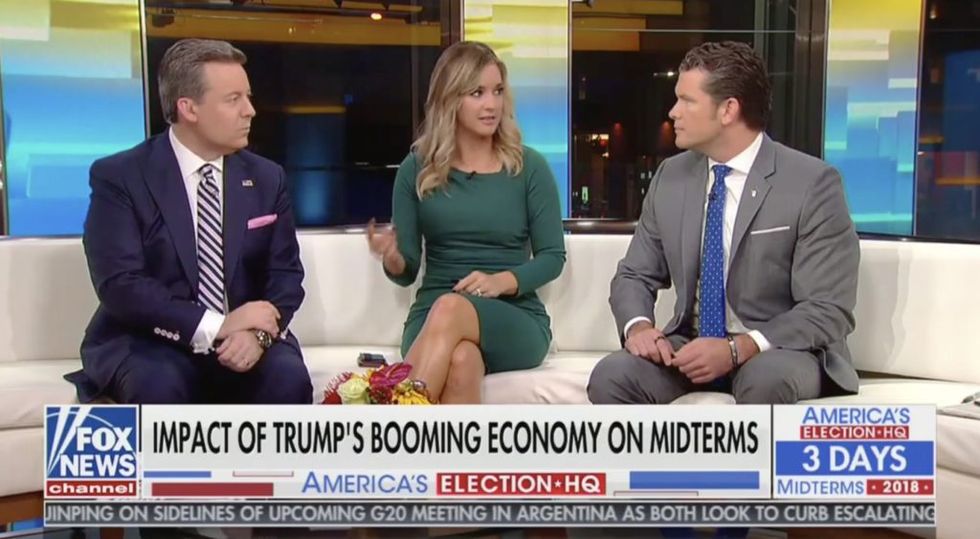 Ed Henry, the chief national correspondent for Fox News, fact-checked weekend 'Fox & Friends' host Pete Hegseth on Saturday after Hegseth claimed that former President Barack Obama should not be given credit for the healthy economy.

At which point Henry chimed in:

“You’ve read the numbers, I’m sure. Barack Obama created more jobs in his final 21 months than President [Donald] Trump has created in his first 21. I’m not saying this President inherited it, but would you acknowledge that he was handed a better economy than Barack Obama got?”

People were happy to see such a spot on instant fact-check on Fox News:

Despite being shut down, however, Hegseth wouldn't let it go.

“Here’s what I’ll acknowledge," Hegseth responded. "Four million new jobs, over four million less people on food stamps. To me, that is a reflection of a President that puts business and the private sector ahead of government assistance and bailouts.”

“He was handed a good economy and made it better," Henry said.

Later, during a discussion with Fox Business host Steve Varney, Henry suggested that Hegseth gets "triggered" whenever he hears anything positive about Obama's economy.

“When Barack Obama came to office, he was losing 600, 700 thousand jobs a month. We were in financial free-fall, correct?… By the end of his administration, in his final 21 months, he created more jobs than President Trump has created in his first 21 months," he said.

“Are you saying he started this?” said co-host Katie Pavlich.

“Hang on, how much debt has President Trump added?” Henry asked, noting that Trump has been “spending money like mad and adding to the debt.”

An analysis by The Joint Committee on Taxation released in November 2017 found that the Republican tax plan would add $1 trillion to the deficit over a decade––even when accounting for economic growth.

Last year, a troubling report from the nonpartisan Congressional Budget Office (CBO) revealed that the plan “gives substantial tax cuts and benefits to Americans earning more than $100,000 a year”––hitting the nation’s poorest citizens particularly hard––and that the legislation would “add an increase in the deficit of $1,414 billion over the next 10 years.”

The administration had yet to release any type of tax analysis, however, and those inside the Treasury’s Office of Tax Policy told reporters that they are not working on any analysis Treasury Secretary Steven Mnuchin has mentioned. In fact, an economist at the Office of Tax Analysis, who spoke to New York Times reporters on the condition of anonymity, said Treasury had not released a “dynamic” analysis indicating the tax plan will pay for itself with economic growth because one did not exist.

The president counts Fox and Friends among his favorite programs, and in September, he came under fire after he, quoting Fox News contributor Peter Ferrara, claimed that the nation’s economic recovery “got started on Election Day 2016.” Ferrara, an attorney and policy analyst, credited Trump’s “tax cuts and regulation cuts” for the healthy economy.

This claim was quickly shown to be incorrect. Digital strategist John Aravosis pointed out that economy actually grew faster under Trump’s predecessor.

This is far from the first time Trump––and the White House––has attempted to obfuscate Obama’s legacy.

In August, in a tweet touting U.S. job growth under Trump, the White House accidentally put the strength of the economy into its proper context by amplifying a graph showing 94 months of consecutive job growth, going back to 2011.

Although Trump has often claimed that the economy has “never been better,” economists have warned that U.S. job growth is largely the result of government borrowing, and there will be more borrowing as the federal deficit rises because of the president’s tax cuts. This progress, unfortunately, is unlikely to be sustainable after a few quarters. And although the United States is on track to add 2.6 million jobs this year, an Associated Press investigation found that the boom favors Democratic strongholds, not areas which Trump won in 2016.