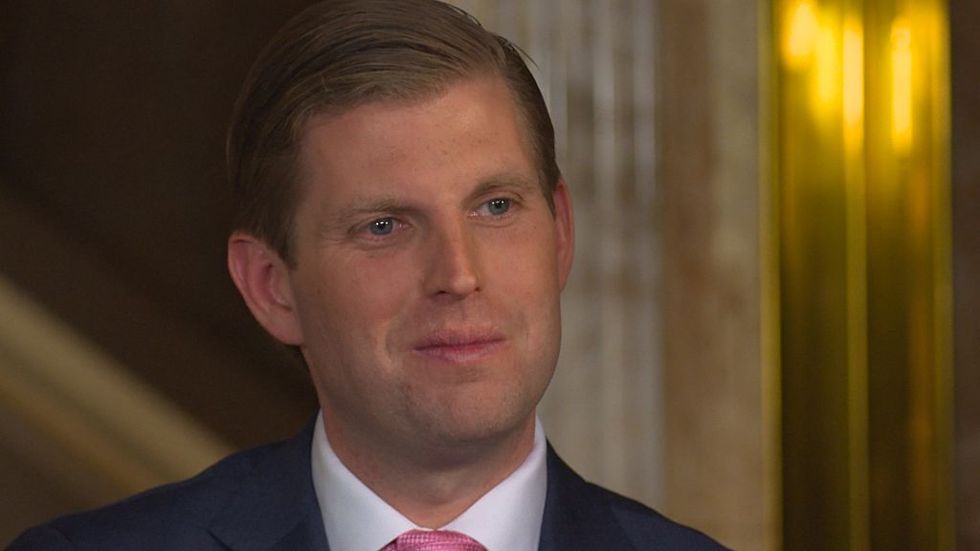 Eric Trump's attempts to get people to register to vote in the upcoming midterm elections backfired after the Rock the Vote Action Fund, which champions young progressives, called him out for using its graphic without accreditation.

Trump had written a message encouraging people to visit a Republican website in order to register to vote in time for the elections on November 6 and attached Rock the Vote's graphic with its logo cropped out.

"This is a new low. We are an unaffiliated, non partisan organization who encourages everyone to vote, not just one group," Rock the Vote wrote in response after slamming Trump as someone "accustomed to ripping folks off."

This is a new low. We are an unaffiliated, non partisan organization who encourages everyone to vote, not just one… https://t.co/baCIuXpUgA
— Rock the Vote (@Rock the Vote) 1539109200.0

“This goes beyond the page of how our democracy should work,” Carolyn DeWitt, the president and executive director of Rock The Vote, said in a statement, accusing Trump and his father President Donald Trump of “only wanting a select few to register to vote and participate in our democracy.”

Eric Trump has not responded to requests for comment.

This is far from the first time a member of the Trump family has been criticized for using someone's graphics or words without credit and misrepresenting facts.

As recently as August, Eric's brother, Donald Trump Jr., made headlines for doctoring a CNN graphic to show that his father had achieved a 50 percent approval rating.

“The doctored image intended to show his father’s approval rating at 50 percent versus President Barack Obama’s 45 percent approval rating,” Second Nexus reported at the time. “Only the 50 percent for Trump failed to pass even brief examination.”

Perhaps, most infamously, there's the case of First Lady Melania Trump, as the following commenter pointed out with a meme that made the rounds in the summer of 2016.

Melania Trump delivered the headlining speech at the Republican National Convention in Cleveland in July 2016. At least one entire section was lifted from a speech former First Lady Michelle Obama gave at the 2008 Democratic National Convention.

TRUMP: “From a young age, my parents impressed on me the values that you work hard for what you want in life. That your word is your bond. And you do what you say and keep your promise. That you treat people with respect. They thought and showed me values and morals in their daily life.”

OBAMA: “And Barack and I were raised with so many of the same values: that you work hard for what you want in life; that your word is your bond, that you do what you say you’re going to do; that you treat people with dignity and respect, even if you don’t know them, and even if you don’t agree with them.”

Melania Trump claimed that she wrote the speech herself, and that she worked with a speechwriter for six to eight weeks in preparation for the convention. The Trump campaign released a statement that did not acknowledge the controversy. Instead, the campaign praised her for speaking openly about her “immigrant experience.”