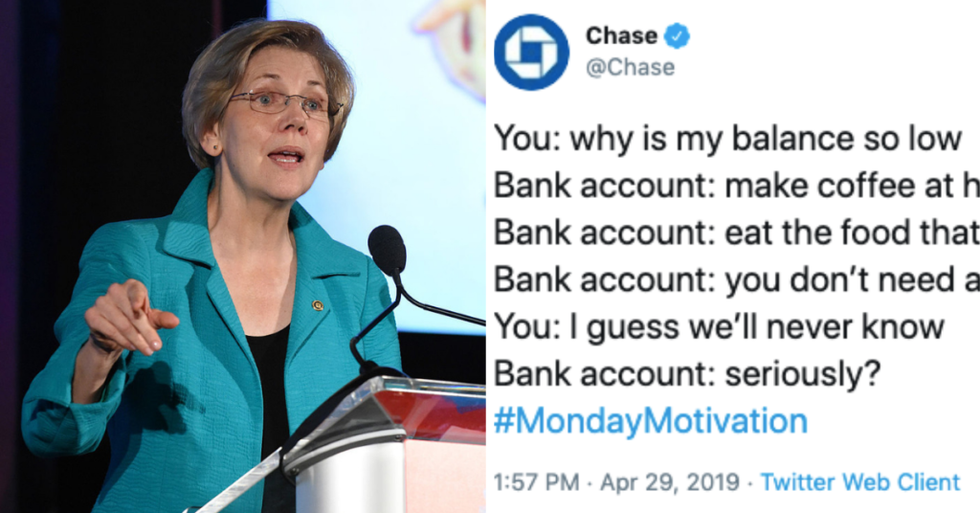 In a since-deleted tweet, Chase shared a #MondayMotivation tip that was soon criticized as an attack against lower-income Americans. The tweet, featuring a fictional conversation between a person and their bank account, recommends that those with low account balances follow money-saving tips such as eating the food they already have on hand and not taking taxi cabs.

The tweet soon earned the ire of Senator Elizabeth Warren (D-MA), who responded by mimicking the original tweet's structure. Warren pointed out that if bank account balances are low, then the $25 billion taxpayer-funded bailouts following the 2008 financial crisis is to blame. She also took employers to task for not paying living wages, and noted that economists have agreed that the high costs of living and "stagnant wages" are the primary reasons why the majority of Americans have little––if any––money saved up.

Warren's tweet soon went viral, and social media users soon chimed in with criticisms of their own.

@SenWarren @Chase Checked @Chase to read responses and weigh in, only to find they been badly ratioed and had delet… https://t.co/veYRttUFSu
— Maureen Sheridan (@Maureen Sheridan) 1556572903.0

Warren has made her name on taking on big banks and corporate malpractice, and her presidential platform addresses ways of balancing power and economy.

Warren has proposed holding accountable corporations that do not pay federal corporate income taxes on their profits:

She has also pushed for the Corporate Executive Accountability Act:

"Our justice system should ensure that if you cheat working Americans, you’ll go to jail. It’s time to reform our laws to make sure that corporate executives are held accountable for overseeing massive scams."

She has also devised a housing plan that would "begin closing the racial wealth gap"...

"Every American deserves a safe and affordable place to live. My plan makes a historic investment in housing that would bring down rents by 10%, create 1.5 million new jobs, and begin closing the racial wealth gap."

...has introduced a plan that would effectively cancel the majority of student loan debt and make higher education accessible to all...

"We should treat higher education like our public school system – free and accessible to all Americans. That’s why I’m calling for something truly transformational – the cancellation of up to $50,000 in student loan debt for 42 million Americans and free universal college for everyone."

...and has proposed an "ultra-millionaire" tax that would benefit an ever-shrinking middle class:

"I’m proposing something brand new – a tax on the wealth of the richest Americans. My Ultra-Millionaire Tax asks the richest 0.1% of Americans to pay their fair share, raising nearly $3 trillion that we can use to rebuild the middle class."

The reasons why so many people have so little in savings are a lot more complicated than them simply not being mindful of their spending habits, but social media users are bound to keep a closer eye on the financial institution's #MondayMotivation messages from now on.