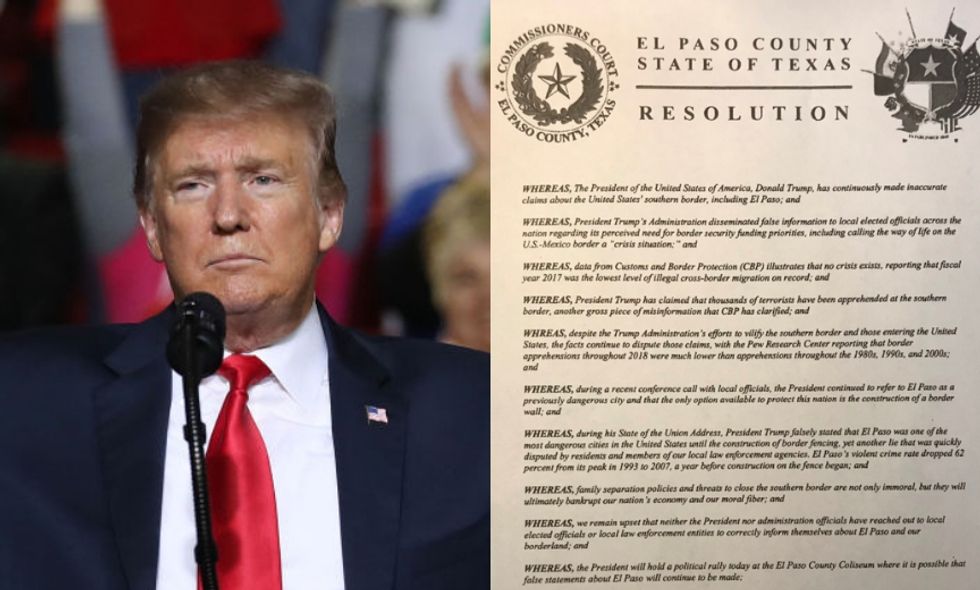 Officials in El Paso, Texas passed a bipartisan resolution on Monday condemning President Donald Trump's false statements regarding the safety of the city.

“Donald Trump has continuously made inaccurate claims about the United States’ southern border, including El Paso,” the resolution said, citing data from Customs and Border Protection that showed that “no crisis exists” on the border.

“The County of El Paso is disillusioned by President Trump’s lies regarding the border and our community," the statement continued, "and though it is difficult to welcome him to El Paso while he continues to proliferate such untruths, we do welcome him to meet with local officials to become properly informed about our great and safe region.”

The resolution also said that Trump never conferred with city officials to get accurate information, and pointed out that the president actually shared his incorrect assertions with local leaders.

"The border city of El Paso, Texas, used to have extremely high rates of violent crime — one of the highest in the country, and considered one of our nation's most dangerous cities," Trump claimed during his State of the Union address. “Now, with a powerful barrier in place, El Paso is one of our safest cities."

This is false. Violent crime reached a low in 2006 before the fence was built, and FBI crime data shows that the violent crime rate in El Paso fell to half the national average in 2017. El Paso was never the most dangerous city in the country, either, despite what Trump said.

This was assailed by El Paso's Republican Mayor Dee Margo, who refuted Trump's lies on Twitter following the State of the Union.

"El Paso was NEVER one of the MOST dangerous cities in the US," Margo wrote. "We‘ve had a fence for 10 years and it has impacted illegal immigration and curbed criminal activity. It is NOT the sole deterrent. Law enforcement in our community continues to keep us safe #SOTU"

"We’ve worked so hard to have the image of a solid community,” said Samaniego, whose family immigrated to El Paso more than a century ago. “Every one of us is touched with the falsehoods that are taking place.”

Esparza said that "even if you give the president the benefit of the doubt, the fence that was built in 2008 has made really no difference one way or the other."

Leon added that Trump's statement was “entirely untrue and unacceptable to the residents of our great city."

Trump, without presenting any evidence to the contrary, rejected the resolution as a crowd of frenzied supporters cheered.

“I don’t care if they’re a Republican or a Democrat, they are full of crap when they say it [the border wall] hasn’t made a big difference,” Trump said.

Unfortunately for Trump, the truth is non-partisan; good for El Paso.

@GarrettHaake Kudos to @ElPasoTXGov for courageously standing up for the truth and calling out the lies told repeatedly by Donald Trump.
— Barbara Strangfeld (@Barbara Strangfeld) 1549921118.0

@GarrettHaake Awesome! It may mean nothing legally, but by gosh it's good to see the El Paso people putting it dow… https://t.co/lzUfO05mGO
— Laura McGinnis (@Laura McGinnis) 1549935370.0

"Nobody tells our story better than we do," O'Rourke told NBC News in El Paso. "It’s incredibly important that this community stand up to be counted, to tell the story and to make sure that we set the record straight. That this is, as you know, a march for truth...we are here to follow the lead of this great community and make sure the country sees us at our best."

O'Rourke held his own event to counter Trump's, which drew a larger crowd. O'Rourke said he was not concerned about Trump coming after him. "I really don’t care about that," he said.

To many, O'Rourke's rally was more indicative of El Paso's values.

@NBCNews This is what a real President stands for, not using peoples’ fear and paranoia to make them so fearful of… https://t.co/ZTS4YvNYfo
— Michelley Thompson (@Michelley Thompson) 1549943570.0

El Paso is "one of the safest cities in the United States of America," O'Rourke said. "Safe, not because of walls — but in spite of walls."