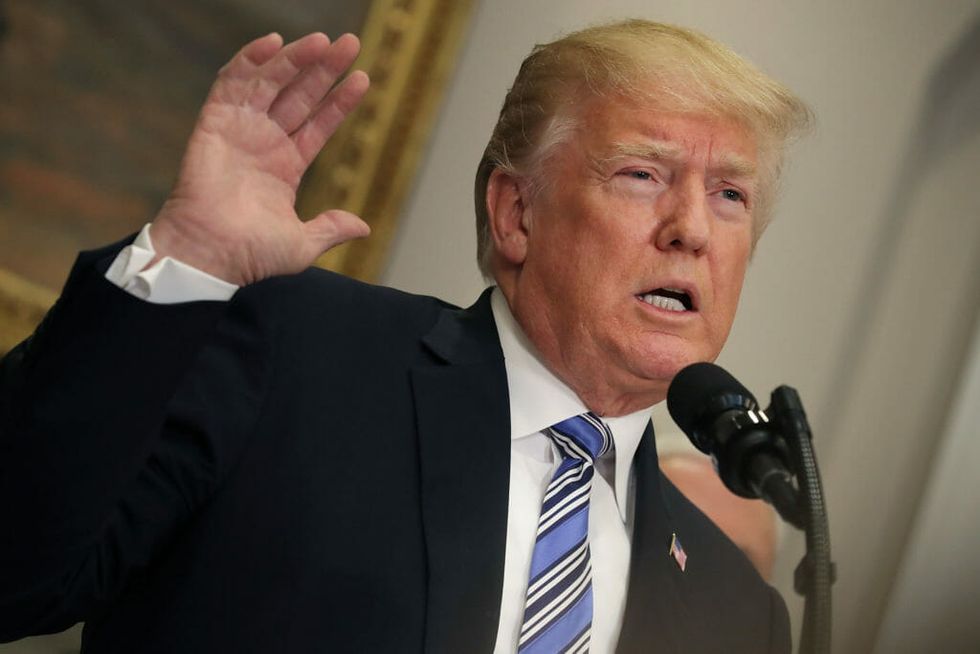 President Donald Trump claimed on Sunday that his presidential approval rating was around 50 percent. The problem is, it's not. In fact, nowhere near 50 percent of the American people approve of his job performance.

FiveThirtyEight, which tracks daily approval and disapproval ratings, pegs Trump's support at just 40.7 percent. Trump then encouraged his followers to "turn off" political pundits who say he has a low approval rating because it's "FAKE NEWS." Twitter was quick to call him out on his blatantly obvious falsehood.

"A real man doesn't have to constantly brag about how popular he is and be reminded of how many people love him," Kristen Neville replied. "Grow up and do your job." Zing.

@realDonaldTrump A real man doesn't have to constantly brag about how popular he is and be reminded of how many peo… https://t.co/waMKR9HUfI
— Kristen Neville (@Kristen Neville) 1520782761.0

No recent poll has given Trump anywhere close to a 50 percent approval rating, as Josh Jordan pointed out on Twitter. "It takes less than 10 seconds to fact-check this delusional tweet." As of Sunday, RealClearPolitics had Trump's average approval rating at a dismal 41 percent.

Trump is actually the third least popular president in modern times. "Mr Trump was ranked close to the “terrible” end of a scale of 1 to 10, landing the third spot ahead of only Lyndon Johnson and disgraced Richard Nixon at the bottom, an Ipsos survey found" according to a survey done by the Center for Politics at the University of Virginia, The Independent wrote in February.

Table 1: Average overall rating for each modern president and by respondent’s party ID

This isn't the first time Trump has cited Rasmussen to lie about his approval rating. In June of last year, he tweeted that Rasmussen polled his approval at 50 percent. "That's higher than O's #'s!"

Politifact rated this claim "mostly false." According to Politifact, at this same point into Obama's presidency, "Obama’s approval ratings were between 54 and 58 percent through June 9-16, 2009, and they did not dip below 50 percent until late July of that year." Whom does Trump think he is fooling?

One guy thinks he knows, and he's probably not far off. "Now think of people who DONT know he lies all the time - or like me - didn’t have a chance to google it because they were on the go and maybe forgot to later," Liran Kapoano said. "I suspect that group of people is far greater than people who look things up." He later added that "this is what makes Trump so dangerous."

The jury is out on whether Trump can, or does, read. Once again, and as usual, the "fake news" is coming from President himself.

@odinsspyd @realDonaldTrump Trump prefers lying over truth, reading, and briefings. It’s all he knows how to do anymore.
— Trump Must Go (@Trump Must Go) 1520812474.0