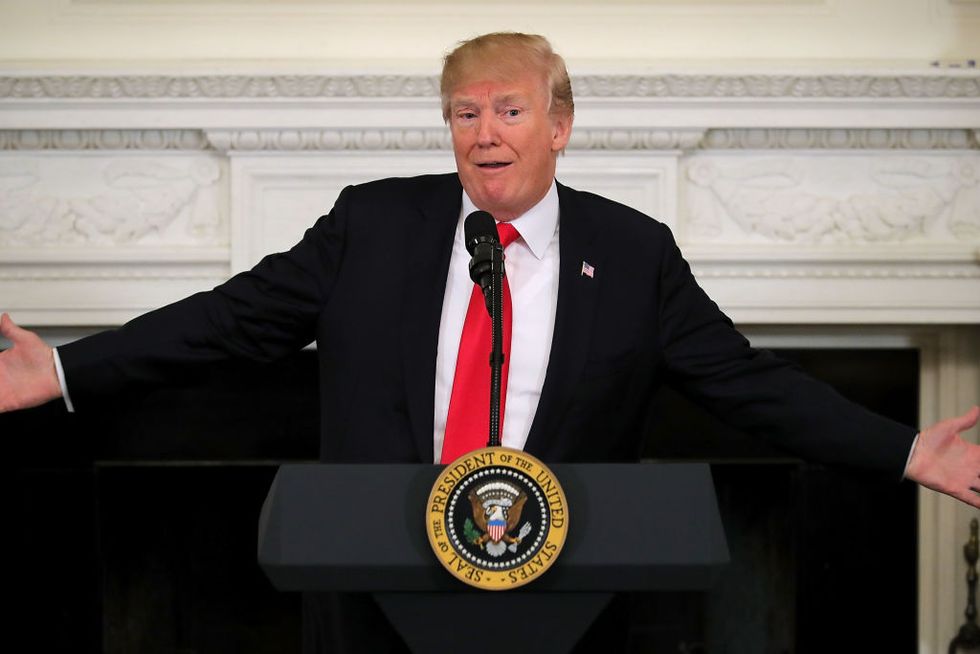 President Donald Trump said that he would have run into Marjory Stoneman Douglas High School––where gunman Nicolas Cruz shot and killed 17 people on Valentine's Day––even if he was not armed.

“You don’t know until you test it, but I think, I really believe I would have run in there even if I didn’t have a weapon,” Trump said.

The president also issued harsh criticisms of several law enforcement officials who were at the scene of the school shooting but did not enter the building. Their actions were "frankly disgusting," he said.

The president's comments quickly made the rounds on social media. The reaction was largely one of disbelief, not to mention mockery. Several regarded as absurd his statement that he would have run into the school sans weapon, pointing out that it's unlikely a man who received multiple student deferments before citing a medical exemption that "staved off the [Vietnam War] draft" would have successfully saved any of the lives lost in the shooting.

trump believes that he would have run into the Parkland School even without a gun. Well that makes one of you. Nobo… https://t.co/y0sgvES2ro
— American Veteran (@American Veteran) 1519668505.0

Trump says he would have charged Parkland shooter even without a weapon, forgetting about his crippling bone spurs… https://t.co/fGwQBotwtc
— Jonathan Chait (@Jonathan Chait) 1519666740.0

Trump has gone on record several times to criticize Florida law enforcement for their response to the shooting. Speaking to reporters at the White House on Friday morning, Trump called Scot Peterson, the armed school resource officer who stayed outside the high school while the shooting was in progress, a “coward” who “did a poor job.”

“When it came time to get in there and do something, he didn’t have the courage or something happened, but he certainly did a poor job. There’s no question about that,” Trump said at the time. “But that’s a case where somebody was outside, they’re trained, they didn’t react properly under pressure or they were coward. It was a real shot to the police department.”

Later that day, speaking during an appearance at the Conservative Political Action Conference (CPAC), Trump said, “He [Peterson] didn’t turn out to be too good, I’ll tell you that. Turned out to be not good, not a credit to law enforcement, that I can tell you."

A lawyer representing Scot Peterson said in a statement that Broward County Sheriff Scott Israel "maligned" him in public statements in which he said Peterson should have gone into the school and killed Nicolas Cruz.

"Let there be no mistake, Mr. Peterson wishes that he could have prevented the untimely passing of the seventeen victims on that day, and his heart goes out to the families of the victims in their time of need," Peterson's lawyer, Joseph DiRuzzo III said. He went on to say that:

However, the allegations that Mr. Peterson was a coward and that his performance, under the circumstances, failed to meet the standards of police officers are patently untrue. Mr. Peterson is confident that his actions on that day were appropriate under the circumstances and that the video (together with the eye-witness testimony of those on the scene) will exonerate him of any sub-par performance.

Trump’s remarks come as the nation grapples with his proposal to arm teachers. Many prominent figures––most notably the survivors of the Parkland shooting––slammed the suggestion. In fact, Felicia Burgin, a teacher at Marjory Stoneman Douglas, suggested the president and his supporters are using Peterson as a “scapegoat” and that he likely would not have been able to save any students.

“The bottom line is I don’t think him [Peterson] going into the building would have prevented any deaths,” Burgin said. “By the time he got over to the building, the shooter––the gunman––was on the third floor. There were children in the hallway that he was shooting. Um, if Officer Peterson was up there, he would have been in a spot to shoot in a hallway where not only the shooter was, but where other children were.”

So I think Delaney [Tarr] said it best when she said there are other things to focus on: Changing the laws, making the school safer going forward. I think that Officer Peterson is being used as a scapegoat, and people are angry right now. They’re angry, they’re hurting, and now, all their hurt is being directed, to me, in the wrong direction. You want to be angry at something? Be angry at the gunman who killed all these people. Be angry at gun laws that allow these guns to be purchased by 18-year-olds, where people can go to gun shows and get a gun without even registering it. There are so many things to be angry about and I think this is just misdirection.

On the heels of this controversy came the release of a recently unearthed interview Trump gave on The Howard Stern Show on July 16, 2008 in which Trump, "a notorious germaphobe," as The Daily Beast points out,discusses his distaste for blood.

I’m not good for medical. In other words, if you cut your finger and there’s blood pouring out, I’m gone,” he told Howard Stern at the time.

Trump then tells Stern about the time he believed a man died in front of him during a charity event at Mar-a-Lago, his private club. Trump "turned away in disgust at the sight of his blood," rather than help the injured man.

I was at Mar-a-Lago and we had this incredible ball, the Red Cross Ball, in Palm Beach, Florida. And we had the Marines. And the Marines were there, and it was terrible because all these rich people, they’re there to support the Marines, but they’re really there to get their picture in the Palm Beach Post… so you have all these really rich people, and a man, about 80 years old—very wealthy man, a lot of people didn’t like him—he fell off the stage... So what happens is, this guy falls off right on his face, hits his head, and I thought he died. And you know what I did? I said, ‘Oh my God, that’s disgusting,’ and I turned away,” said Trump. “I couldn’t, you know, he was right in front of me and I turned away. I didn’t want to touch him… he’s bleeding all over the place, I felt terrible. You know, beautiful marble floor, didn’t look like it. It changed color. Became very red. And you have this poor guy, 80 years old, laying on the floor unconscious, and all the rich people are turning away. ‘Oh my God! This is terrible! This is disgusting!’ and you know, they’re turning away. Nobody wants to help the guy. His wife is screaming—she’s sitting right next to him, and she’s screaming... What happens is, these 10 Marines from the back of the room… they come running forward, they grab him, they put the blood all over the place—it’s all over their uniforms—they’re taking it, they’re swiping [it], they ran him out, they created a stretcher. They call it a human stretcher, where they put their arms out with, like, five guys on each side... I was saying, ‘Get that blood cleaned up! It’s disgusting!’ The next day, I forgot to call [the man] to say he’s OK. It’s just not my thing.

You can listen to the recording HERE. Perhaps, more than anything else, it accentuates the absurdity of the president's claim.