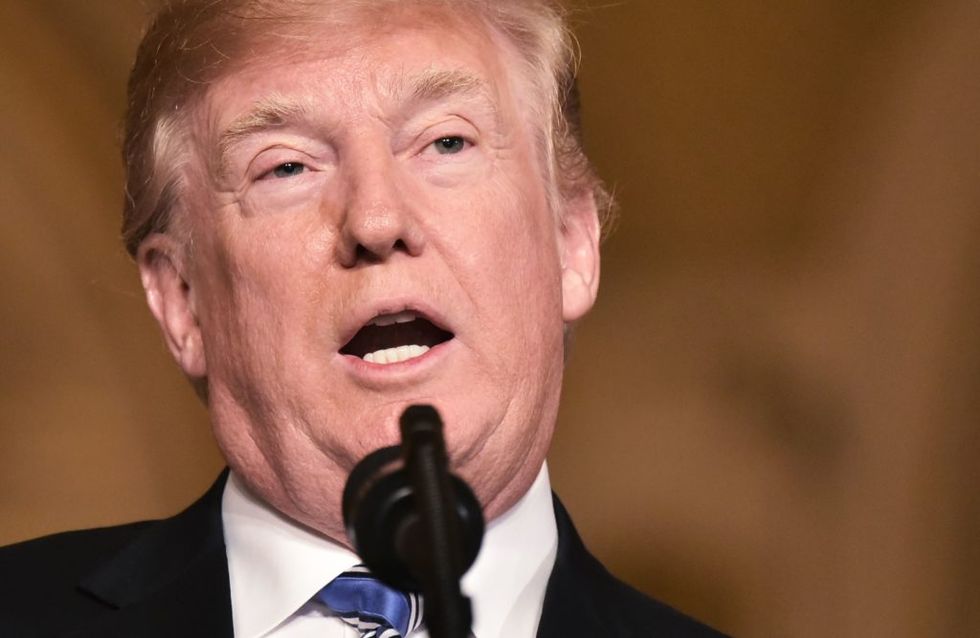 Millions of Americans participated in events and activities promoting environmental protection and sustainability on Earth Day on Sunday.

A statement issued by the president lavished praise on the administration for "removing unnecessary and harmful regulations," which, of course, are in place to protect and sustain our planet's biosphere.

In the statement, Trump credits a "Creator" for blessing Americans with "abundant natural resources," which he says should be protected for our generation "and that of generations to come."

Today, our Nation commemorates Earth Day, a celebration of the blessings given to us by our Creator. Among them, we cherish our magnificent land and waterways, abundant natural resources, and unique wildlife. As a Nation, it is our duty to recognize the importance of these life-sustaining gifts, and it our responsibility to protect them for our own benefit and that of generations to come.

The Trump administration, particularly under the leadership of EPA Administrator Scott Pruitt, has prioritized rescinding Obama-era regulations that were enacted to preserve and protect our land, natural resources, and wildlife, all of which face uncertain futures due to human-caused climate change.

The prime targets of Trump's environmental regulation rollbacks are air and water, which Trump and his allies deem harmful to business and have claimed stifle economic growth. By using terms like "their environment," Trump offers a vision that local jurisdictions are encapsulated in their own micro-world, with no responsibility for or effect on surrounding ecosystems.

A healthy environment and a strong economy go hand in hand. We know that it is impossible for humans to flourish without clean air, land, and water. We also know that a strong, market-driven economy is essential to protecting these resources. For this reason, my Administration is dedicated to removing unnecessary and harmful regulations that restrain economic growth and make it more difficult for local communities to prosper and to choose the best solutions for their environment.

Protecting and preserving the global environment and climate require international cooperation and policies based on scientific data, the scientific consensus about which Trump and his confederates continue to deny.

One of the more extreme cuts occurred last year when Trump's EPA ended Obama's Clean Power Plan, which aimed to cut carbon dioxide levels in the atmosphere to 32 percent below their 2005 levels by 2030. In the months since, other regulations have been cut, specifically those aimed at protecting our air and water supplies.

Trump has also signaled his desire to back out of the Paris Climate Accord. He has said that it's a "bad deal" for the United States.

Although Trump claimed in the statement to be "committed to furthering this rich legacy of conservation," his removal of numerous basic protections does just the opposite.

Americans embrace the idea of enjoying nature in a responsible fashion, while preserving the blessings of the land for future generations. my administration os committed to furthering this rich legacy of conservation.

The message concludes with instructions for Americans to "give thanks" for the environment, although to whom or for what specifically is unclear. Unfortunately for Trump, neither prayer nor well-wishing is effective means of protecting the environment.

This Earth Day, I hope all Americans will give thanks for the environment we share, protect, and call home.

Twitter users reacted to the president's statement with frustration and dissent, with accusations of Trump lying about how his government is acting to protect our planet's ecosystems.

@gbennettpost @realDonaldTrump Trump has to do his part to DESTROY THE EARTH on #EarthDay ! #UnfitToBePresident #sad #FakePresident
— Michelle Hackett (@Michelle Hackett) 1524423298.0

Unless carbon dioxide emissions are reduced or eliminated entirely, Earth's climate will continue to warm, driving more extreme weather patterns and disrupting natural cycles in the food chain. Our oceans are acidifying, and climate scientists are unanimous in their dire warnings about the future.

"Soon it will be too late to shift course away from our failing trajectory, and time is running out,"15,000 scientists warned in a letter to the world. "We must recognize, in our day-to-day lives and in our governing institutions, that Earth with all its life is our only home."

More than 15,000 scientists co-signed a letter written by Professor William Ripple, an ecologist from Oregon State University, which was published in BioScience last November.

Humanity is now being given a second notice ... We are jeopardising our future by not reining in our intense but geographically and demographically uneven material consumption and by not perceiving continued rapid population growth as a primary driver behind many ecological and even societal threats.

Ripple urged the world to pay attention and drove home the fact the climate change is caused by humans, and leaders who fail to heed the scientific reality of human activity's effect on the environment do so at great peril.

Those who signed this second warning aren't just raising a false alarm. They are acknowledging the obvious signs that we are heading down an unsustainable path. We are hoping that our paper will ignite a widespread public debate about the global environment and climate.

Ripple and his colleagues pointed out the following impacts industrialized society is already having on our planet. As reported in The Independent:

The amount of fresh water available per head of population worldwide has reduced by 26%.

The number of ocean "dead zones" - places where little can live because of pollution and oxygen starvation - has increased by 75%.

Nearly 300 million acres of forest have been lost, mostly to make way for agricultural land.

Human population has risen by 35%.

Collectively the number of mammals, reptiles, amphibians, birds and fish in the world has fallen by 29%.