Donald Trump Thinks He Knows What Would Happen If He Were Impeached, but People Aren't Buying It 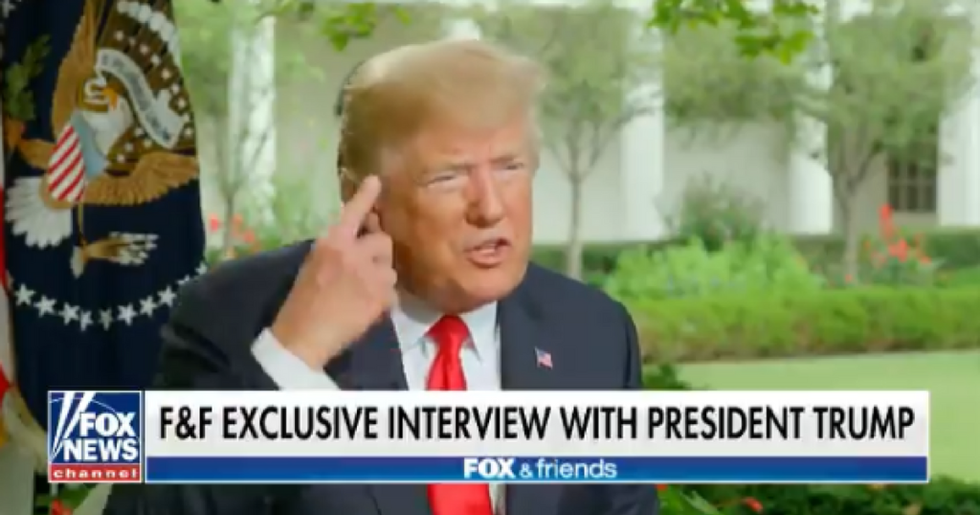 President Donald Trump foretold of economic cataclysm if he were to be impeached, predicting to Fox News in a Thursday interview that "everybody would be very poor" should Congress remove him from office.

Fox's Ainsely Earhardt asked Trump if he believes Democrats would try to impeach him if they retake control of the U.S. House of Representatives in the fall. The president responded by patting himself on the back.

"You know, I guess it says something like high crimes and all," Trump said. "I don't know how you can impeach somebody who has done a great job."

The president continued, warning of fiscal disaster if he gets impeached.

"If I ever got impeached, I think the market would crash, I think everybody would be very poor," the president said. Trump then pointed at his head and said: "because without this thinking, you would see numbers that you wouldn't believe, in reverse."

CNBC's John Harwood pointed out that under Trump, the stock market has gone up 29 percent, while under President Barack Obama, it went up 149 percent.

Trump said he would give himself an "A+" on his job performance so far, citing his Supreme Court appointments and aggressive trade policies.

"I give myself an A+. I don't think any President has ever done what I have done," Trump boasted.

We haven't even been 2 years. Biggest tax cuts in history. Soon to be two unbelievable Supreme Court justices, I'm sure that Justice Kavanaugh will be approved. Justice Gorsuch has been a star. You look at all the things we have done with regulations, the economy is the best it has ever been in history. The only thing I'm doing badly in is the press doesn't cover me fairly.

Obama's economy was better, and Trump is a criminal.

"Morality is more important than money."

"The market will be fine without you."

Why would Congress impeach you, Mr. President?

As you said, "high crimes" and misdemeanors...

...such as being an unindicted co-conspirator in a plot to sway the 2016 election.

It doesn't matter if you give yourself an "A+," if there were crimes committed, there are consequences.

Oh, and President Bill Clinton balanced the budget. He was impeached.

Under Trump, the United States is coasting toward a trillion dollar deficit.