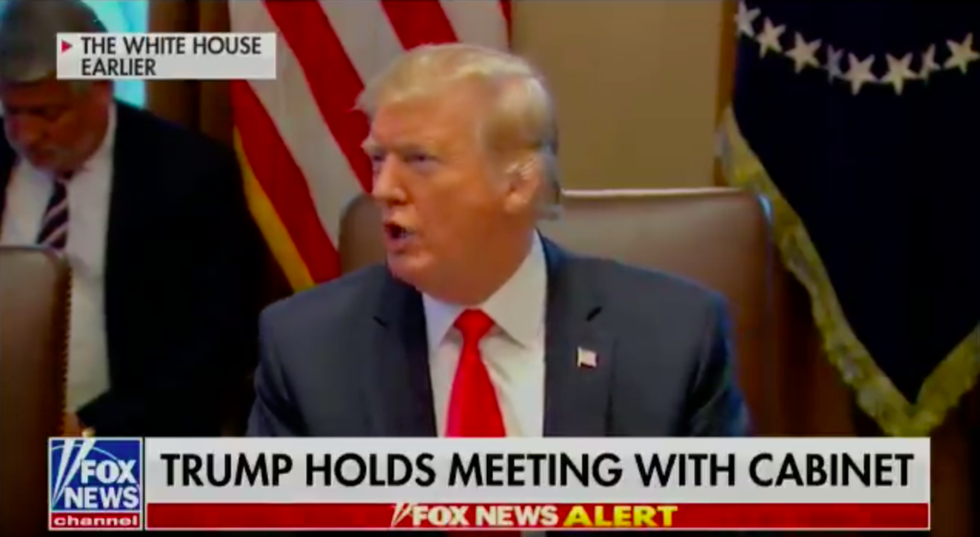 At a cabinet meeting Wednesday, President Donald Trump claimed to have "essentially fired" former Secretary of Defense James Mattis and criticized the U.S. military's leadership, saying he believes he "would've been a good general."

About Mattis, Trump said "What's he done for me? How had he done in Afghanistan? Not too good. As you know, President Obama fired him, and essentially so did I."

But we do know, Mr. President. The answer is "bone spurs," which prompted many to make the same joke:

Trump received five military draft deferments during the Vietnam War, including one medical deferment after he was diagnosed with bone spurs––protrusions caused by calcium built up on the heel bone––in his foot while a student at the private New York Military Academy. “I had a doctor that gave me a letter — a very strong letter on the heels,” he said during an interview with The New York Times in 2016 explaining his deferments, adding that the heel spurs were “not a big problem, but it was enough of a problem.”

Trump has often been mocked for his bone spurs story, perhaps most notably by late Senator John McCain (R-AZ), whom he criticized earlier during the same Cabinet meeting.

The relationship between the two men was notoriously contentious and in 2015, Trump, then a presidential candidate, infamously said that McCain, a veteran of the armed forces who was a prisoner-of-war in Vietnam, was “not a war hero.”

"He was a war hero because he was captured. I like people who weren’t captured,” Trump said at the time.

McCain, in response, mocked Trump’s multiple draft deferments, pointing to wealthy Americans who were able to get out of being drafted into service. McCain has been awarded the Silver Star, the Bronze Star, the Legion of Merit, a Purple Heart and the Distinguished Flying Cross for his military service.

Larry Braunstein, who set up his podiatry practice in the Trump-owned Edgerton Apartments in Jamaica, Queens, often spoke of signing off on the diagnosis, they said.

“I know it was a favor,” Elysa Braunstein told the New York Times. “What he got was access to Fred Trump. If there was anything wrong in the building, my dad would call and Trump would take care of it immediately. That was the small favor that he got.”

Larry Braunstein did not leave any medical records after his death, so the sisters don’t have documentation that would corroborate their claim. President Trump has claimed to have documentation, however, but has never produced it.