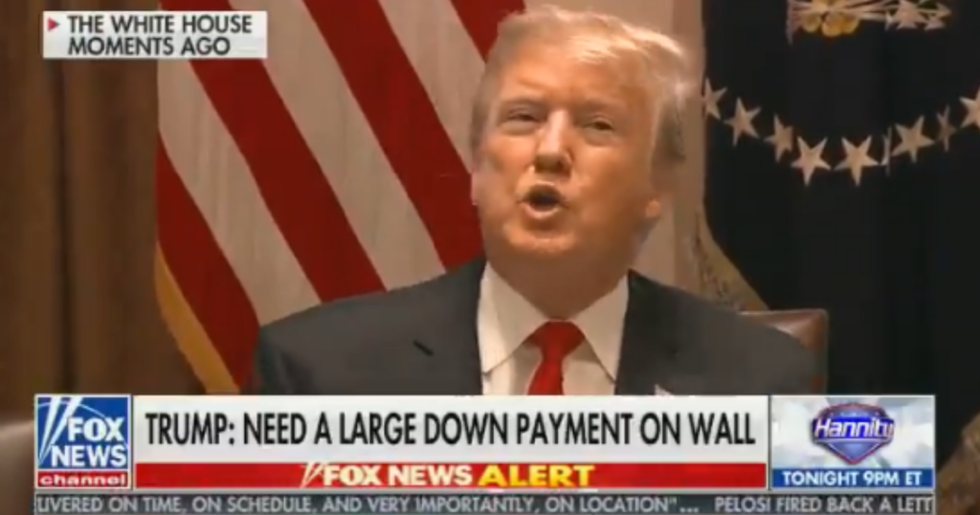 Hours after Commerce Secretary Wilbur Ross said he did not understand why furloughed government workers have resorted to relying on food banks, President Donald Trump was asked to clarify Ross's comments.

"Well, I know they are, and I don't really quite understand why. The obligations that they would undertake, say borrowing from a bank or a credit union, are, in effect, federally guaranteed. So the 30 days of pay that some people will be out ... there's no real reason why they shouldn't be able to get a loan against it."

Trump's followup was borderline incoherent. For a second time, the president demonstrated that he has no idea how grocery stores work. Last July Trump claimed shoppers needed a photo ID to buy groceries. Today, he said they extend credit.

"Perhaps he should have said it differently. Local people know who they are when they go for groceries and everything else, and I think what Wilbur was probably trying to say is that they will work along. I know the banks will work along. If you have mortgages, the mortgagees... the folks collecting the interest and all of those things, they work along."

"That's what happens in times like this. They know the people, they've been dealing with them for years, and they work along. The grocery store. I think that's probably what Wilbur Ross meant but I haven't seen his statement, but he's done a great job, I can tell you that."

Whatever the president was trying to say was lost on an increasingly exasperated public.

Trump seemed to be suggesting that grocery stores will give free stuff to unpaid federal workers.

@bad_takes @robdelaney It's just possible that people still bought groceries this way back when Trump was a kid in… https://t.co/38UZvK2Woz
— Warren Terra (@Warren Terra) 1548370239.0

He also insinuated that banks would cut debtors a break if they fall behind on their mortgage payments.

If you thought Wilbur Ross's comments were out of touch, he's got nothing on Trump.

That is not how any of this works, though to be fair, the banks owe the American people a bailout. Regardless, wow.

@bad_takes It's like Trump thinks we can buy food on a credit line from the General Store like we're in Little House on the Prairie.
— Frostreads (@Frostreads) 1548370370.0

How does one "work along," exactly?

Trump and Ross are billionaires (one of them for sure). Neither have ever lived paycheck-to-paycheck or faced the prospect of losing their homes.

There have never been "times like this." Hundreds of thousands of federal employees will go without a second consecutive paycheck tomorrow because Trump said in December he would be "proud to shut down the government over border security." Here we are.