Donald Trump Just Accused a Democrat of Stealing His New Campaign Slogan, But Turns Out Democrats Used It First 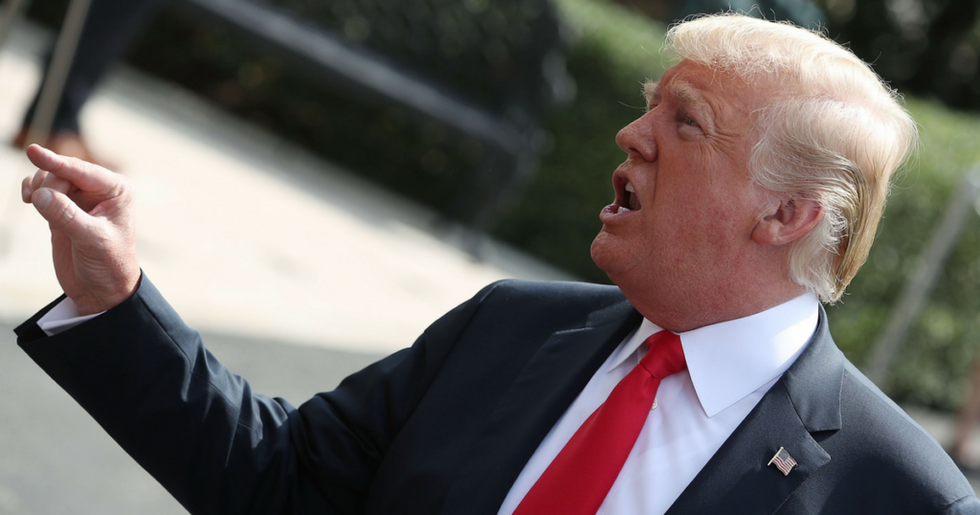 WASHINGTON, DC - AUGUST 17: U.S. President Donald Trump speaks to the media before departing on Marine One to travel to New York, at the White House on August 17, 2018 in Washington, DC. Trump will attend a fundraiser in West Hampton Beach, New York. (Photo by Mark Wilson/Getty Images)

"That's not at all nice," Trump wrote of de Blasio, who is not currently campaigning for re-election (he was re-elected last year). "No imagination!"

De Blasio "appeared in front of a sign declaring “Promises Made, Promises Kept” at a groundbreaking for a new, 1000-seat school in East New York on Monday," the New York Post reported. The mayor's office said their use of the slogan was purely coincidental.

"This is stupid," City Hall spokesman Eric Phillips quipped. "It’s not the most novel turn of phrase."

But as MSNBC producer Kyle Griffin noted, "Promises Made, Promises Kept" is not a Trump original. In fact, the president borrowed the phrase from President Bill Clinton's re-election bid in 1996.

And one Twitter user pointed out that "Promises Made, Promises Kept" was also used at the 1968 Democratic National Convention.

So did a mortgage company.

Perhaps even more perfect is that Trump has usurped not one but two presidential campaign slogans - Clinton/Gore 1996 - and Ronald Reagan's slogan in 1980: "Let's Make America Great Again."

Another of Trump's political catchphrases, "America First," first appeared on a coin issued by the Ku Klux Klan.

Trump has taken credit for other phrases as well. In October 2017, the president falsely boasted that he had invented the term "fake news."

I think one of the best names is — you know, I've really started this whole 'fake news' thing. Now they've turned it around and then, now, they're calling, you know, stories put out by different — by Facebook 'fake.

"This is the opposite of what happened in real life on planet Earth," wrote Callum Borchers of the Washington Post.

Social media was ruthless in its mockery of the president.

"He stole it first."

"From campaign slogans to email," one user wrote, referring to Trump's plea to Russia to hack and steal Hillary Clinton's emails.

"The amazing ego of the toddler-in-chief makes him think everything originates with him."

@ChelseaClinton The amazing ego of the toddler-in-chief makes him think everything originates with him.
— Dean Warrenfeltz (@Dean Warrenfeltz) 1534865442.0

Is this what is meant by "Be Best?"

@realDonaldTrump @foxandfriends You promised ; To release your #TaxReturns. Not done. To drain the swamp. Most co… https://t.co/RvLtBsXSHj
— Paul T Murphy (@Paul T Murphy) 1534866725.0

Then there was this whopper.

@realDonaldTrump @foxandfriends You should keep THIS PROMISE! You can't LIE and call THIS #FakeNews because the… https://t.co/eggKkMpnQu
— Terree Rola (@Terree Rola) 1534866383.0

Another called out other times Trump has used someone else's idea.

@realDonaldTrump @foxandfriends Your wife recited practically an entire speech by Michelle Obama at the UN and you… https://t.co/do0BPt39SM
— emily nunn (@emily nunn) 1534869084.0

Trump can be credited with one memorable line, though.

@realDonaldTrump @foxandfriends Having read some of this thread, I feel compelled to ask; What original slogans hav… https://t.co/k8UO1lomqW
— Simon Gregg (@Simon Gregg) 1534868984.0