Don Lemon Juxtaposed Donald Trump's Meeting With Kanye West With the Crises Happening At the Same Time, and He Makes a Good Point 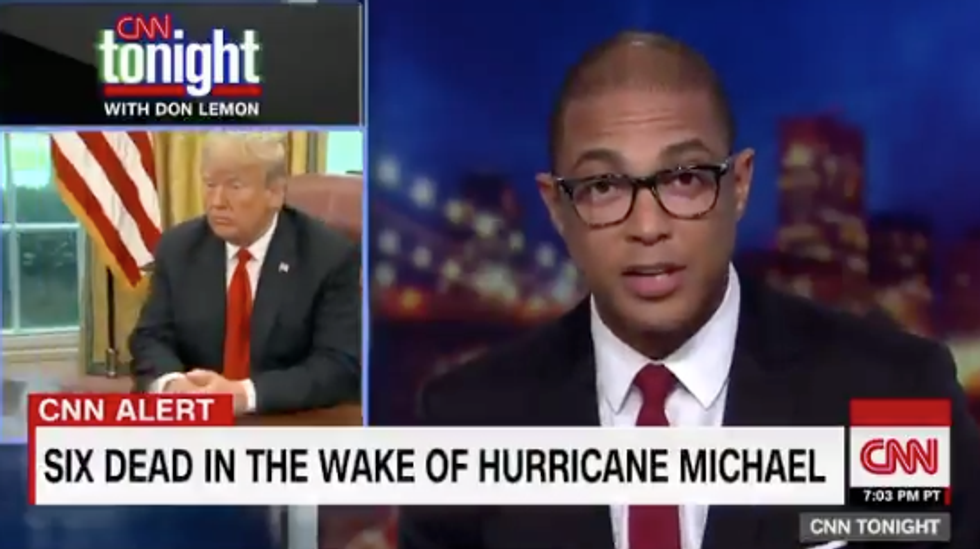 President Donald Trump's bizarre Oval Office meeting with Kanye West has CNN's Don Lemon worried that the president is not paying attention to the issues facing the nation. On Thursday night, Lemon panned the stunt as “a scene that was just plain embarrassing."

Lemon tore into Trump during Thursday's CNN Tonight, listing major issues that were placed on the president's back burner as he warbled with West in the White House.

“A scene that was just plain embarrassing," says @DonLemon. While the President was meeting Kanye, cities were in… https://t.co/5rvCjsQia2
— CNN Tonight (@CNN Tonight) 1539311797.0

First, Lemon turned to the devastation wrought by Hurricane Michael, which tore through the Florida panhandle and central Georgia earlier this week as a near category 5 storm. At least 11 people are confirmed dead. Michael was the strongest hurricane to hit the U.S. mainland since Andrew in 1992.

"While the president met with Kanye, cities were in ruin across the Florida panhandle," Lemon said. "Thousands of people" have been left homeless or are in need of aid due to flooding, Lemon said, and he was only getting started.

The stock market has been tanking this week too, losing over 1,300 points in two days, despite Trump's claims that the economy has never been stronger.

"While the president met with Kanye, the Dow was plummeting for a second straight day," Lemon pointed out, "slamming the 401Ks of hardworking people across this country and wiping out most of the good news from the year."

Lemon next turned to the disappearance and likely murder of Washington Post reporter Jamal Khashoggi, who vanished in Turkey earlier this month and is believed to have been tortured, killed, and dismembered by Saudi operatives.

"While the president met with Kanye, the disappearance of journalist Jamal Khashoggi, a resident of this country, remained officially unsolved," Lemon said. "A U.S. official telling CNN that the working assumption is that Khashoggi was murdered inside the Saudi Consulate in Istanbul."

Lemon then shared breaking news that Turkish officials have audio and video recordings "that prove a Saudi security team murdered Khashoggi," a story which The Washington Post broke earlier in the evening.

Some of Lemon's followers on social media agreed that whatever that display was at the White House on Thursday was nothing short of embarrassing.

@CNNTonight @donlemon Does anything happen in the Oval Office that is not embarrassing?
— John MacLean (@John MacLean) 1539346814.0

Lemon played a string of clips from the Trump-West debacle showing West ranting nearly incoherently while Trump smiled and egged him on.

@thedailybeast @MarlowNYC It was not some liberal plot to exploit Kanye West that brought him into the White House… https://t.co/EdZ94kqudx
— Barbara Graver (@Barbara Graver) 1539346187.0

@realDonaldTrump How embarrassing that you would host mentally ill Kanye West to exploit him for the African Americ… https://t.co/UowqzVS4Ee
— Vicki (@Vicki) 1539341961.0

@magafins @briansflood Oh, please. Trump is only good for wanting people of color to be locked up, loss of rights,… https://t.co/mOcf8HYTfJ
— Stephanie Jackson (@Stephanie Jackson) 1539350774.0

@NewDay @MichaelEDyson I don’t know how comfortable I am analyzing the pathologies of Kanye exploiting himself for… https://t.co/B1A1B5GFVX
— Nasim (@Nasim) 1539345553.0

Lemon added that Trump is only using West to pretend to care about black Americans, and was aghast that Trump allowed West to drop an F-bomb in the Oval Office.

"You may not have expected to have a crazy mother-f*cker like Kanye West run up and support," West bellowed, "but best believe, we are gonna make America great."