Donald Trump's 2020 Campaign Just Admitted They're Lying to Supporters in Their Latest Fundraising E-mail, and We're Not Surprised 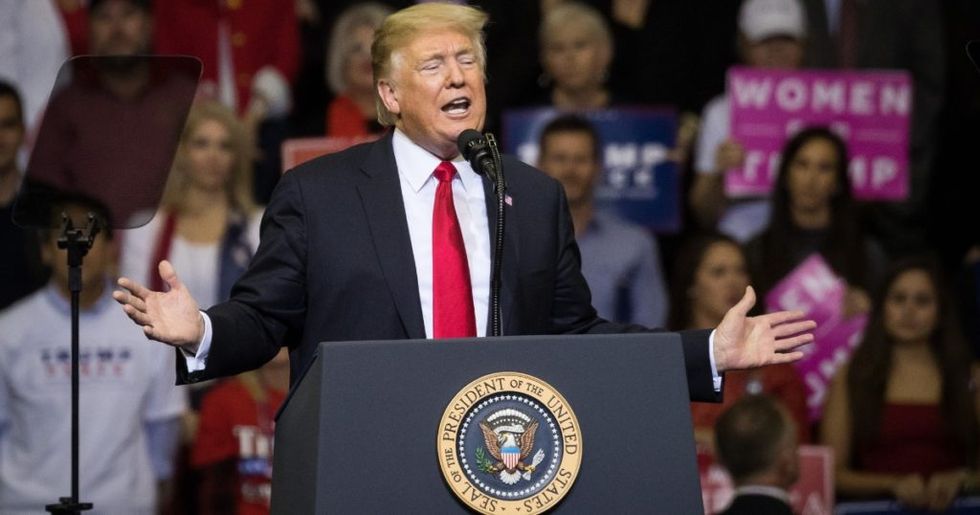 HOUSTON, TX - OCTOBER 22: U.S. President Donald Trump addresses the crowd during a rally in support of Sen. Ted Cruz (R-TX) on October 22, 2018 at the Toyota Center in Houston, Texas. Cruz, the incumbent, is seeking Senate re-election in a high-profile race against Democratic challenger Beto O'Rourke. (Photo by Loren Elliott/Getty Images)

The campaign to re-elect President Donald Trump in 2020 sent a deceptive email to supporters in which Trump pledges to match donations made to his campaign to help Republicans in the midterms.

The subject line read, "I'm MATCHING contributions," followed by a message for his base.

"I WILL NOT LET THE RADICAL DEMOCRATS WIN," the email stated.

"I AM MAKING A TRANSFER TO MATCH $3 MILLION WORTH OF GRASSROOTS CONTRIBUTIONS TO DEFEAT THE DEMOCRATS IN JUST 14 DAYS."

Donors are encouraged to give $5-10, which Trump promises to match "dollar-for-dollar," to "protect our majority and defeat the Democrats."

On Wednesday, Ken Vogel of the New York Times reported that Trump has no intention of donating any of his own money. Rather, the president plans on transferring the money his campaign receives to the Republican National Committee.

That's the mood on Twitter, where people are convinced that Trump's most ardent fans either won't realize or care that they're being duped.

@kenvogel @CillizzaCNN surprise! another lie from trump about spending his own money...this after RNC has spent a f… https://t.co/aaHUFnxtgC
— doreen anderson (@doreen anderson) 1540396930.0

@kenvogel @POTUS Wow, the poor people who fall for this bull**** And it is the financially less well off that will… https://t.co/rgxsNC3XYs
— GlynisMJenkins (@GlynisMJenkins) 1540393301.0

Where does his money come from, and how much does he have? No one knows.

@kenvogel @POTUS He doesn’t have any money!! His daddy’s money is gone and Uncle Vlad and the Saudis are no longer options.
— Pauline Criel (@Pauline Criel) 1540398782.0

Trump is infamous for not paying his debts. He's notoriously cheap.

@kenvogel @POTUS Exactly. It would be the day Trump would lay down his own dime for anything.
— OttolineMorrell (@OttolineMorrell) 1540394552.0

Speaking of Trump's finances, where are his tax returns?

@kenvogel He's all mouth, an empty suit who never pays up while convincing the rubes to spend their last dimes on his worthless promises.
— Old Salt (@Old Salt) 1540345613.0