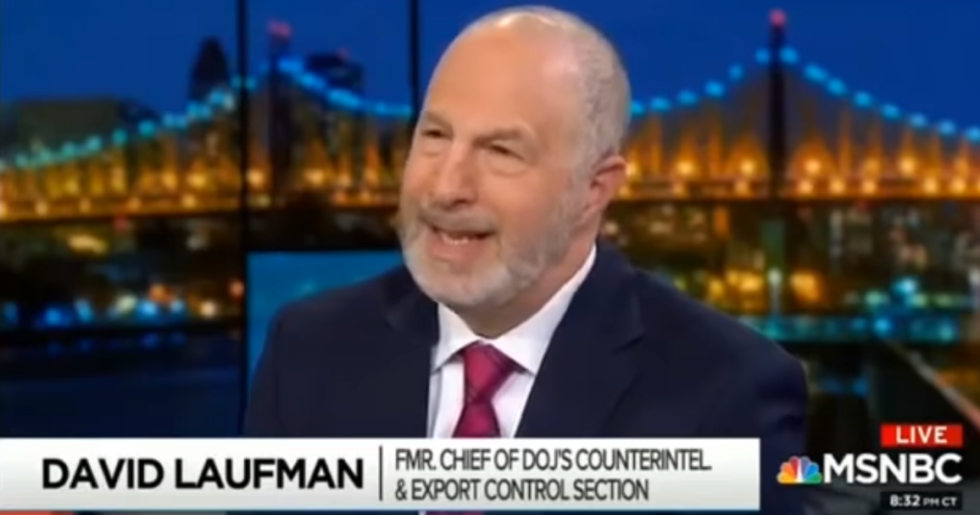 President Donald Trump is a threat to national security because of his relationship with Vladimir Putin, one former counterintelligence official told Rachel Maddow Monday night.

David Laufman, the former chief of the Counterintelligence and Export Control Section of the Justice Department's National Security Division, said his “tipping point” came after reading a Washington Post story about how Trump went to great lengths to hide details of his meetings with Putin.

The Post's reporting was "positively chilling," said Laufman, pointing to Trump's “unbelievable acquiescence” to Putin in Helsinki last summer. Trump's perceived subservience to Putin is “positively shocking” for an American president, he stressed.

"National security begins at home," Laufman warned, "and the positions the administration has taken on domestic policy issues, the divisiveness... undermining the cohesiveness we have as a people... that weakens us as a people and makes us more vulnerable to our enemies."

Laufman added that there is "nothing mundane about the FBI launching a counterintelligence investigation focused on the president of the United States."

Laufman encouraged citizens to "mobilize and communicate with members of Congress" in a "legal and non-violent call to arms" because "there is nothing mundane" about a president being investigated for working on behalf of a hostile foreign power.

Laufman's words and experience carry serious weight, and his visible concern is worrisome.

@kylegriffin1 @RobCalfee Other presidents made pledges. Other govt"s have shutdown. But those presidents compromis… https://t.co/p3hgV2X2Ot
— Alien (@Alien) 1547564707.0

Prior to his appearance on MSNBC, Kaufman tweeted Sunday night: "Now is the time for all good men (and women) to come to the aid of their country," linking to the bombshell report from WaPo.

The problem is that few within the President's party are willing to step up, despite the "clear and present danger" Kaufman described.

The President's most ardent supporters continue to fall in line with him no matter the issue, even if it means enabling Trump's government shutdown, the longest ever, now on its 23rd day.

@DavidLaufmanLaw But who is left in power that will actually act to save our country? The entire GOP has rolled ov… https://t.co/uIJrtaFzw8
— jack クスマノ (@jack クスマノ) 1547347275.0

Utter silence from those in power charged with protecting our country from enemies foreign and domestic.

@MSNBC @lestatdelc How many more high profile people need to say thus before Congress acts as a check on this lunat… https://t.co/j87NUnDP5w
— SoYouSay (@SoYouSay) 1547534201.0