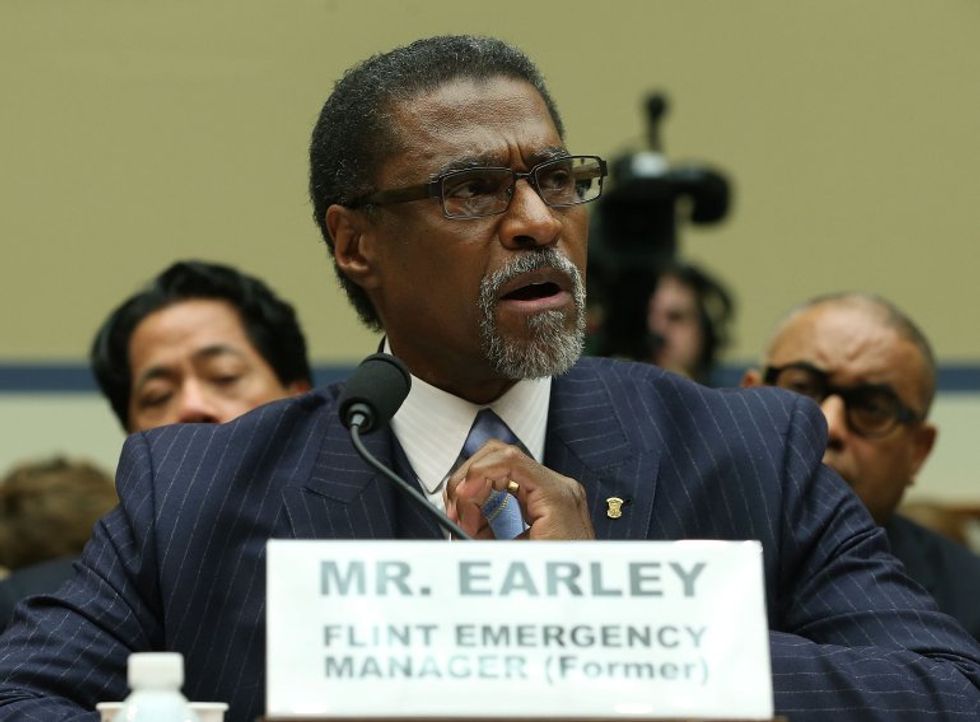 Authorities have charged Nick Lyon, the director of Michigan's Department of Health and Human Services, with involuntary manslaughter and misconduct in office over the Flint water crisis. Lyon is the highest-ranking member of Republican Governor Rick Snyder's administration to face charges in the criminal investigation of how the city's water system became poisoned after city officials tapped the Flint River––switching the water source from Detroit––in part to save money.

Speaking at a press conference, Michigan's Attorney General Bill Schuette said that Lyon "failed in his responsibilities to protect the health and safety of the citizens of Flint." He noted that the involuntary manslaughter charge stems from Lyon's failure to alert the public about an outbreak of Legionnaires' disease, a form of atypical pneumonia caused by breathing in droplets of contaminated water, which would eventually kill 12 people and sicken more than 70 in 2014 and 2015. An involuntary manslaughter conviction carries up to 15 years in prison.

Prosecutors have also brought charges against five other people:

Attorneys for the officials vehemently denied the charges.

Chip Chamberlain and Larry Willey, who are representing Lyon, called the charges "baseless," adding that the "true" facts "simply do not support the prosecution's claims."

Shekter Smith's lawyer, Brian Morley, said: "It's my understanding neither she nor the Department of Environmental Quality were responsible for Legionella issues. So I fail to see why the charge is being filed against Liane."

Earley's attorney Todd Perkins said he's "very disappointed in these new charges," and doubled down on his client's innocence.

According to Wayne State University law professor Peter Henning, prosecutors might face a difficult time convincing a jury that the officials' failure to disclose the risk of Legionnaires' disease caused a death.

"This case is going to become a battle of the experts, something we don't usually see in a homicide or manslaughter prosecution," Henning said. "This is a tough case for the attorney general. They can get a conviction but it's not going to be easy."

Although Attorney General Bill Schuette expressed his belief that the Flint water crisis "has created a trust crisis for Michigan government, exposing a serious lack of confidence in leaders who accept responsibility and solve problems," he said that Governor Snyder, who has issued apologies for his administration's failures, might not face criminal charges. "We only file criminal charges when evidence of probable cause of a crime has been established. And we're not filing charges at this time," he said.

Snyder, meanwhile, has thrown his support behind Lyon and Wells. "Director Lyon and Dr. Wells have been and continue to be instrumental in Flint's recovery," he said in a statement. "They have my full faith and confidence, and will remain on duty at DHHS."