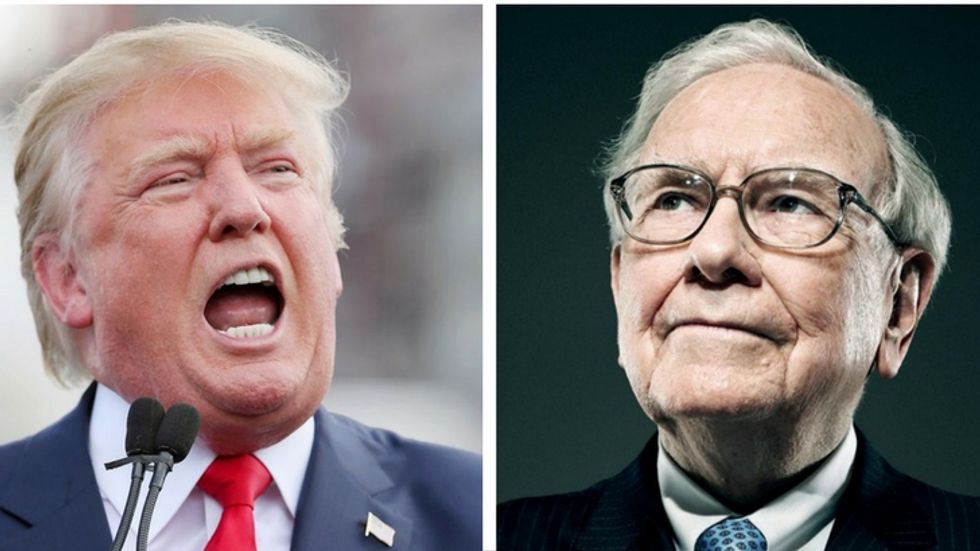 Billionaire Warren Buffett issued a challenge to Donald Trump while speaking at a campaign rally for Hillary Clinton in Omaha, Nebraska. Buffett called on Trump to release his tax returns, something Trump has refused to do, citing an ongoing audit by the IRS. Buffett cast doubt on Trump’s claim: “Now I’ve got news for him, I’m under audit too,” he told the crowd, “and I would be delighted to meet him anyplace, anytime, before the election. I’ll bring my tax return, he can bring his tax return… and let people ask us questions about the items that are on there.”

In fact, Trump’s refusal to comply inspired new legislation. In May, Senate Finance Committee Ranking Member Ron Wyden (D-Oregon) proposed a measure which would require all presidential candidates to release their tax returns. The measure, the Presidential Tax Transparency Act, would require

any presidential candidate to release the most recent three years of tax returns to the Federal Elections Commission (FEC). The bill states that candidates would need to release their returns within 15 days of becoming the nominee at their party’s convention. The Treasury Secretary would provide the tax returns directly to the FEC should the candidate refuse to comply.

Despite Trump’s claims to the contrary, audits do not formally prohibit anyone from releasing their returns to the public. (Former President Richard Nixon publicly released his tax returns while under audit in 1973.) Sen. Wyden maintains that the Presidential Tax Transparency Act is designed to protect the integrity of the Oval Office. “Since the days of Watergate, the American people have had an expectation that nominees to be the leader of the free world not hide their finances and personal tax returns,” he said. “Tax returns deliver honest answers to key questions from the American public. Do you even pay taxes? Do you give to charity? Are you abusing tax loopholes at the expense of middle-class families? Are you keeping your money offshore? People have a right to know.”

Buffett’s comments may further damage the Republican presidential candidate during a particularly tough week. Pundits speculated about his possible financial ties to Russia. And a number of prominent conservatives criticized Trump for his public feud with Khizr and Ghazala Khan, the parents of a Muslim American Army captain slain in Iraq in 2004, following their appearance at the Democratic National Convention in Philadelphia last Thursday evening. Buffett also weighed in on the controversy, openly admonishing Trump at the campaign rally.  “How in the world can you stand up to a couple of parents who lost a son and talk about sacrificing because you were building a bunch of buildings?” Buffett said. “Trump and his family have sacrificed nothing; building buildings is not sacrifice. I ask Donald Trump: ‘Have you no sense of decency, sir?’”