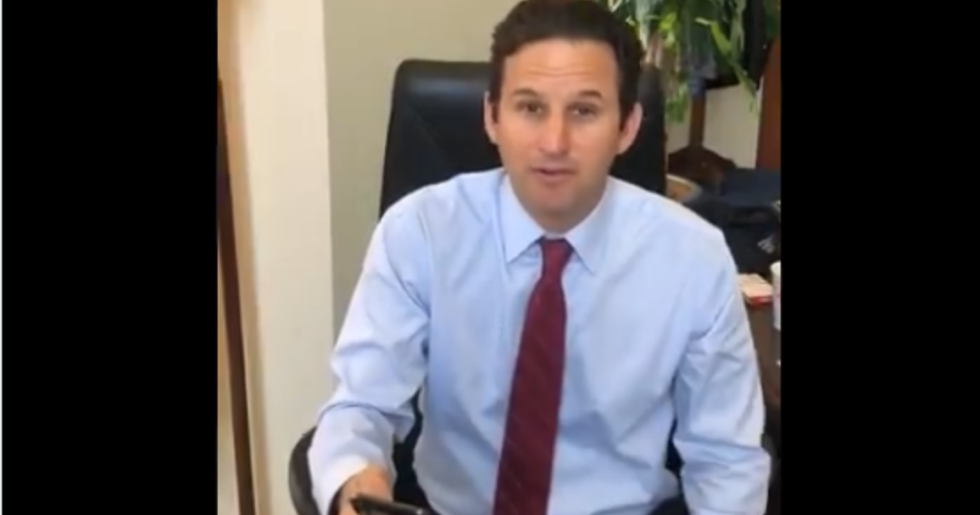 President Donald Trump declared a national emergency on February 15 to force funding for a wall at the southern border, but it's been met with wide opposition in Congress.

On Tuesday, the House of Representatives—followed by the Senate—will vote on a measure blocking what Democrats and even some Republicans view as an unconstitutional power grab.

Senator Brian Schatz (D-HI) appeared in a Twitter video Tuesday morning and read the contents of the resolution for "Republicans who claim they haven't had a chance to read the resolution of disapproval of Trump's fake emergency."

It could not be shorter or sweeter.

The legislation contains the following language:

"Resolved by the Senate and House of Representatives of the United States of America in Congress assembled, that pursuant to section 202 of the National Emergencies Act, the national emergency declared by the finding of the president on February 15, 2019, in proclamation 9844 is hereby terminated."

This is some serious shade.

@brianschatz I mean the elegance and cheerful jubilance of the shade you are offering here Sir, is just soooooo fin… https://t.co/IS6X8XRQYs
— Meredith Heron (@Meredith Heron) 1551204568.0

People are wondering, though, why after three days some Republicans Senators have still not read the bill.

This is a reasonable question, considering Republicans admittedly did not read the massive tax cut bill they passed in 2017, which is now wreaking havoc on income tax returns.

@brianschatz Further proof that my extreme dislike for the majority of the Republicans in Congress is well founded.… https://t.co/09dKgkRe38
— I miss Jack Bruce (@I miss Jack Bruce) 1551196629.0

@brianschatz Thank you for reaching across the aisle. The Rs are increasingly demonstrating the need for leadership… https://t.co/in8NLqaErp
— JKCecil (@JKCecil) 1551203926.0

The resolution is expected to easily pass the Democrat-controlled House. Democrats in the Senate are hoping to siphon four Republican votes in order get it through the upper chamber. As of Tuesday, three Republican Senators - Susan Collins (ME), Lisa Murkowski (AK), and Thom Tillis (NC) - have all committed to voting with Democrats.

Trump has threatened to veto the measure, which Congress could override.