A resource for good. 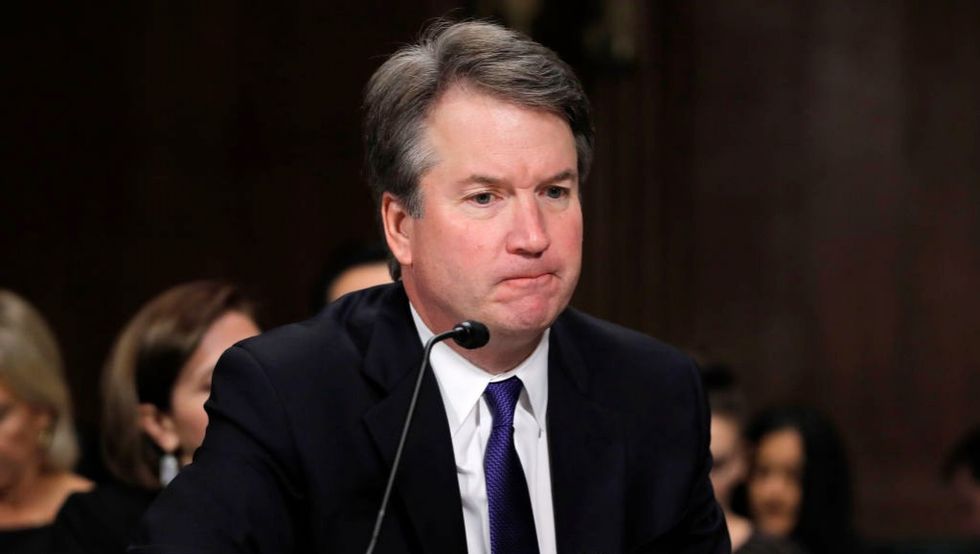 Brett Kavanaugh may have been narrowly confirmed to the Supreme Court on Saturday, but the stain of sexual misconduct accusations isn't going to stop haunting him anytime soon. Take for example Fix The Court's new initiative. They've launched BrettKavanaugh.com as a resource for survivors of sexual assault.

Fix The Court, a non-partisan organization that fights for judicial reforms such as term limits, launched BrettKavanaugh.com and the two others so that victims of sexual violence can access various resources to assist in the healing process and to pursue justice.

One of the links is dedicated to combating sexual assault on college campuses.

"We Believe Survivors" is etched into the top of BrettKavanaugh.com.

"The start of Brett Kavanaugh’s tenure on the Supreme Court may look like a victory for one interest group or another. But, more importantly, it is putting a national focus on the issue of sexual assault – and how we as a country can and should do more to prevent it and to support those who have experienced it."

The creators praised women who have found the strength to face their trauma head-on. Many of these women were inspired by Kavanaugh's accusers - Dr. Christine Blasey Ford, Deborah Ramirez, and Julie Swetnick - who publicly alleged that Kavanaugh assaulted them at parties in the 1980's.

"This past month, thousands of survivors came forward to tell their stories. We applaud your bravery. we believe you."

Twitter was all too happy to spread the word. And unfortunately for Kavanaugh, the internet is forever.

I want everyone to visit this site. Imagine being Brett, knowing this is out there, and there is nothing he can do… https://t.co/AutEDQB06r
— Martian Leader (@Martian Leader) 1539120722.0

Fix The Court executive director Gabe Roth explained in a statement that the URLs were originally intended to provide information on future Supreme Court nominees.

"Three years ago, I bought a handful of URLs that I thought might be useful in any forthcoming Supreme Court confirmation battles. Included were BrettKavanaugh.com, .org and .net," Roth said. "Today I am redirecting those three to a landing page with resources for victims of sexual assault."

"I believe Dr. Ford. I believe Prof. Hill. I also believe that asking for forgiveness is a sign of maturity and strength, not weakness," he said.

Roth was having none of it.

"Watching last night’s White House event and listening to the President again cast doubt on the veracity of Dr. Ford’s claims," Roth said, "while not hearing a word of contrition from the newest justice, was difficult for many Americans who have experienced sexual misconduct firsthand."

"Fix the Court stands with you. We believe you, and we support you. And if you seek additional resources, you can go to BrettKavanaugh.com."

In an email to Law&Crime.com, Roth said that the elevation of Kavanaugh to the highest court in the land should serve as a rallying cry for victims of sexual violence.

"It’s an exciting day for the newest justice,” Roth said. “But for Americans who have experienced sexual assault, today is a reminder that we as a country needs to do more to ensure that their pain is acknowledged, their stories are heard and that there are ample resources for healing and justice.”

Roth added that Kavanaugh's "affect and overall lack of contrition have been harmful to the institution in which he now sits."