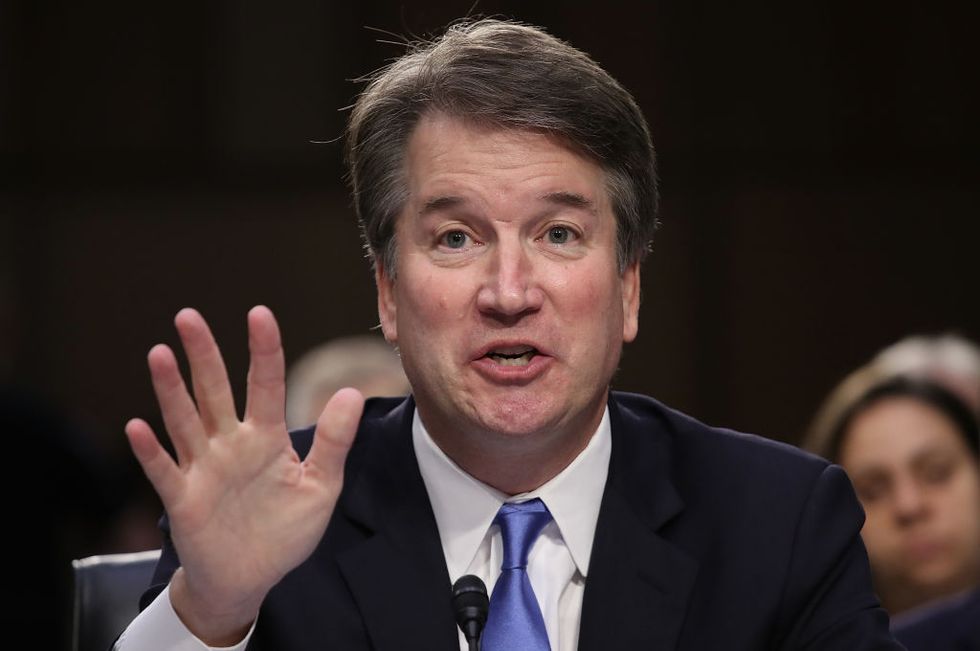 It's only the second day of an already contentious confirmation process for Brett Kavanaugh, President Donald Trump's nominee to the Supreme Court. This time, he's come under fire for a rather roundabout response to a "hypothetical" question asked by Senator Dianne Feinstein (D-CA)

It all began when Feinstein asked Kavanaugh whether a sitting president should be "required to respond to a subpoena."

"That's a hypothetical question about what would be an elaboration or a difference from U.S. v. Nixon's precise holding and I think going with the Justice [Ruth Bader] Ginsburg principle––which is really not the Justice Ginsburg alone principle, it's everyone's principle on the current Supreme Court––and as a matter of the canons of judicial independence, I can't give you an answer on that hypothetical question," Kavanaugh replied to what many consider an unmistakeably straightforward question.

"So you can't give me an answer on whether a president can respond to a subpoena from a court of law?" Feinstein asked.

"My understanding is that you're asking me to give my view on a potential hypothetical and that's something that's every-–each of the eight Justices currently sitting on the Supreme Court, when they were sitting in my seat, declined to decide potential hypothetical cases," Kavanaugh replied, before turning, once again, to the "precedent" established in United States v. Nixon, which found that presidents must obey subpoenas and produce requested documentation.

"As a nominee, I follow the precedent of the nominees who've been here before and, as a matter of judicial independence not give you a precise answer on a hypothetical that could come before me," he added.

Kavanaugh's response didn't go over well with critics who accused him of dodging the question entirely. One of them was Feinstein herself.

Another was Senator Ben Cardin (D-MD) who pointed out that Kavanaugh was part of the team which subpoenaed President Bill Clinton and, thus, was not answering a hypothetical at all.

When asked if the President of the United States must abide by a subpoena, #Kavanaugh replied, "you're asking me to… https://t.co/eDW4xj0AcV
— Senator Ben Cardin (@Senator Ben Cardin) 1536165535.0

Others were more pointed.

This morning Brett Kavanaugh wouldn’t say whether a President can be subject to a subpoena. He doesn’t have to bec… https://t.co/3wPDrPyqx2
— Mikel Jollett (@Mikel Jollett) 1536159228.0

Kavanaugh's nomination has not been without controversy, much of it generated by outrage at the notion that a president under federal investigation could nominate someone with the potential to sway the court’s opinion in the event of an indictment.

To that end, it’s obvious why the president ultimately picked Kavanaugh, who is perhaps best known for the leading role he played in drafting the Starr report, which advocated for the impeachment of President Bill Clinton and whose views about when to impeach a president are likely to remain contentious subjects during his confirmation hearing.

Yesterday, Kavanaugh also sparred with Feinstein when she objected to his views on gun control.

“In District of Columbia v. Heller, you wrote that ‘unless guns were regulated either at the time of the Constitution was written or traditionally throughout history, they cannot be regulated now,” Feinstein said in her opening remarks, adding:

In your own words, gun laws are unconstitutional, unless they are quote ‘traditional or common in the United States.’ You concluded that banning assault weapons is unconstitutional because they have not historically been banned. And this logic means that even as weapons become more advanced and more dangerous, they cannot be regulated … If the Supreme Court were to adopt your reasoning, I fear the number of victims would continue to grow and citizens would be rendered powerless in enacting gun laws.

Feinstein said that if the Supreme Court were to adopt Kavanaugh's reasoning, she fears “the number of more victims will continue to grow.”

Very powerful moment from @SenFeinstein as she confronts Kavanaugh for advancing @NRA's "guns everywhere and for ev… https://t.co/7wbMFAwVnk
— igorvolsky (@igorvolsky) 1536080712.0

These concerns were dismissed by Senator Ben Sasse (R-NE), who called them "patently absurd."

.@BenSasse dismisses concerns that Kavanaugh's appointment will result in people dying because of his positions on… https://t.co/d13bCxpohA
— Aaron Rupar (@Aaron Rupar) 1536082969.0

During yesterday's hearing, Sasse pleaded with his colleagues to support Kavanaugh and “stop the charades.”

“So the question before us today is not what is Brett Kavanaugh think 11 years ago on some policy matter, the question before us is whether or not he has the temperament and the character to take his policy views and his political preferences and put them in a box marked irrelevant and set it aside every morning when he puts on the black robe. The question is does he have the character and temperament to do that,” he said.