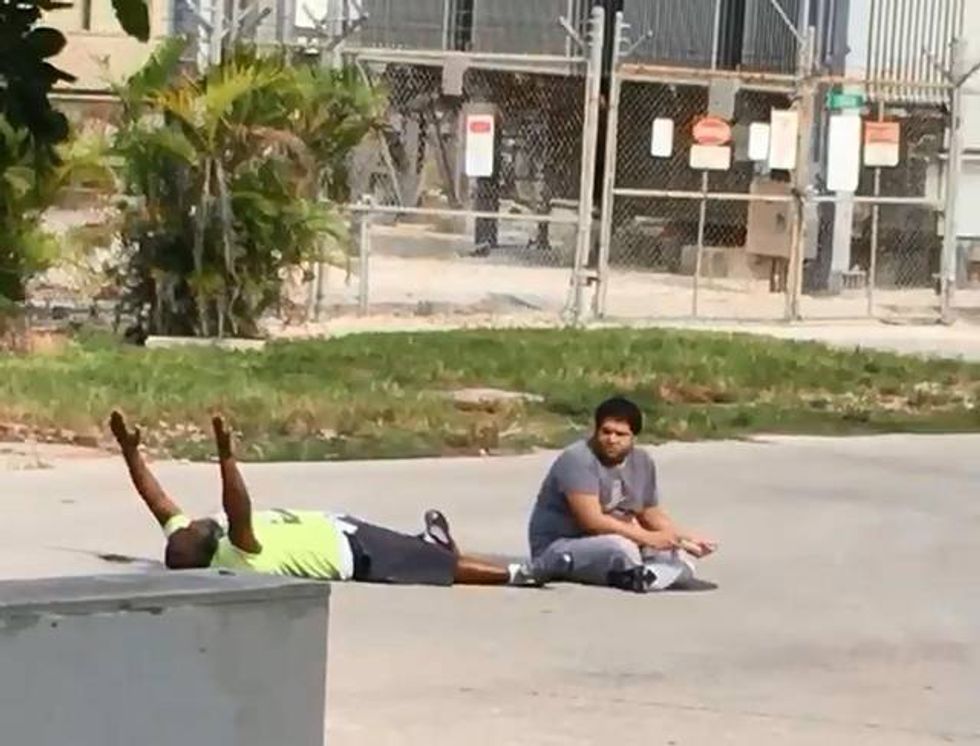 Charles Kinsey, a group therapist at a Miami-area health center, went to retrieve an autistic patient who had left the premises and wandered into the street. He did not expect to get shot.

According to North Miami Police, the incident began Monday afternoon. Officers arrived on the scene after someone called 911 saying there was a man on the street with a gun threatening suicide. In an interview with reporters from his hospital bed, Kinsey said the “gun” was in fact a toy truck which was clearly visible to police. Local media outlets obtained cellphone video footage corroborating Kinsey’s story. The footage, taken before the officer fired his weapon, shows his patient, a 23-year-old man named Rinaldo, sitting in the middle of the roadway and playing with his toy while Kinsey obeys police orders to lie down on the ground on his back. Kinsey has his hands in the air throughout the entire ordeal.

Kinsey had no reason to believe the incident would turn violent as long as he complied. “I was really more worried about him [Rinaldo] than myself,” he said. “I was thinking as long as I have my hands up… they’re not going to shoot me. This is what I’m thinking, they’re not going to shoot me. Wow, was I wrong.” Kinsey’s account suggests compliance would not have helped. “I’m like this right here, and when he shot me, it was so surprising,” he continued. “I thought it was a mosquito bite, and when it hit me I had my hands in the air, and I’m thinking I just got shot! And I’m saying, ‘Sir, why did you shoot me?’ and his words to me were, ‘I don’t know.’”

After the shooting, officers approached Kinsey, patted him down, handcuffed him. He waited on the ground for twenty minutes for a rescue squad to arrive before medics transported him to Jackson Memorial Hospital. Speaking from her husband’s bedside, Joyce Kinsey said she is “grateful” her husband is alive “and able to tell his story.”

Assistant Police Chief Neil Cuevas said the police department turned the investigation over to the Miami-Dade State Attorney’s Office. Cuevas stated the officer fired his weapon three times after Kinsey’s patient was unable to comply with police orders, hitting Kinsey once in the leg. Cuevas said he does not yet know who the officer who shot Kinsey is. The officer has not been identified and is on administrative leave. It is still unclear if he will face charges for the shooting. The police department still hadn’t released any paperwork related to the shooting by Wednesday.

a settlement with the city: “They [North Miami Police] realize this was something inappropriate regarding the shooting.” But he is outraged. “There’s no justification for shooting an unarmed person who’s talking to you and telling you that they don’t have a gun, and that they’re a mental health counselor,” Napoleon said.

The incident in North Miami comes after two highly publicized incidents in which black men were killed by police officers, both of which were captured live on video. On July 5, Alton Sterling, of Baton Rouge, Louisiana, was shot and killed during an altercation with two police officers. The officers responded to an anonymous tip about a man threatening people with a gun outside a convenience store. Video footage from eyewitnesses shows police ordering Sterling to get on the ground before tackling him and pinning him down. Sterling was shot several times and killed. Witnesses later confirmed that Sterling did have a gun in his pocket, but that he never showed the weapon to anyone.

The following day, Philando Castile was shot and killed by an officer during a traffic stop in Falcon Heights, Minnesota while his fiancée and 4-year-old daughter sat in the car. The shooting made headlines after Castille’s fiancée, Diamond Reynolds, live-streamed the bloody aftermath on Facebook. According to Reynolds, Castille told the officer he had a firearm he was licensed to carry. The officer shot him as he reached into his pocket for his wallet and identification.

The shootings inflamed racial hostilities and violence erupted at a protest in Dallas, Texas, resulting in the deaths of five police officers. A separate attack in Baton Rouge on Sunday claimed the lives of three members of law enforcement. The issues are certain to shift the conversation during an already heated presidential election which has highlighted gun violence and inequity within the criminal justice system as crucial issues.