We feel her pain. 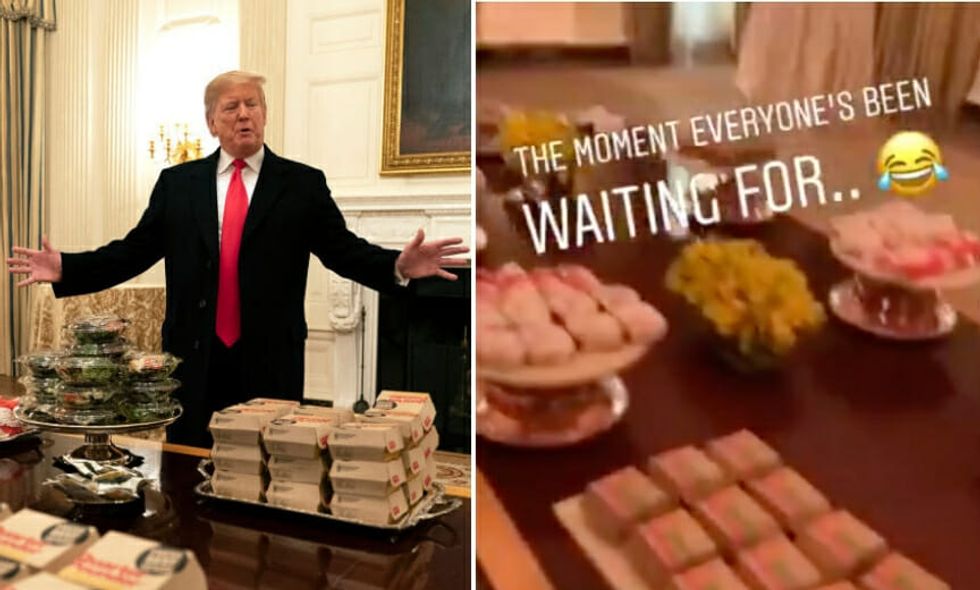 Baylor Basketball player Kalani Brown got the full White House treatment, and her reaction is hilarious.

The championship-winning Baylor University Lady Bears, who won their third national title in this year’s N.C.A.A. final, were welcomed to the White House yesterday. This is the first time a women's team been honored by President Donald Trump with an official invitation to the Oval Office, and the president marked the occasion in his usual style: by presenting the athletes with fast food.

Earlier this year, Trump welcomed the national champion football team The Clemson Tigers to the White House with a carefully-curated selection from Wendy's, McDonalds, and Burger King...served on silver platters, because he's classy like that.

The Lady Bears got the same treatment.

Baylor player Kalani Brown posted an Instagram video of the buffet. "The moment everyone's been waiting for..." she typed, adding a laugh-cry emoji.

The White House offered the Lady Bears a spread that included Big Macs, Pizza, and Chick-fil-A. "Whoa, like wow," Brown said in her video, laughing as she panned over the tables heaped with burgers and pizza.

Trump spared no expense: he even provided heat lamps to keep the fries hot and crisp. There was even BBQ sauce!

When the Clemson Tigers got their burgers and fries, Trump said it was because of the government shutdown. I wonder what his excuse is this time?

@linzsports @kalanibrown21 The first time this happened the government shutdown was a poor excuse but it was a reas… https://t.co/OZ2IfDBAc6
— Louis Morgan (@Louis Morgan) 1556625823.0

@linzsports @kalanibrown21 So it wasn't just the government shutdown that resulted in the Fast Food Fiasco for Clem… https://t.co/C8Cs0lR1Ae
— Jonathan Coleman (@Jonathan Coleman) 1556571469.0

Kalani Brown's got all the commentary we need. "Okay, Donnie. Cool."