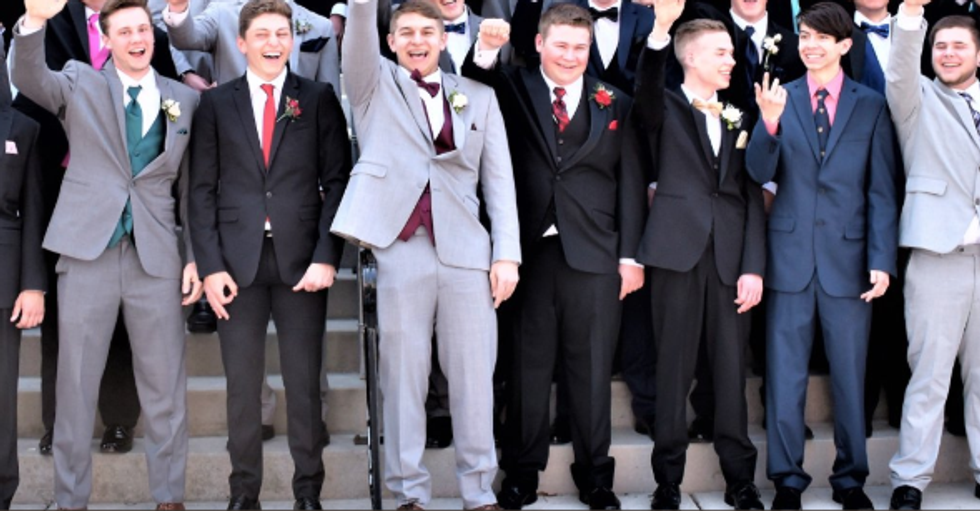 A photo of roughly 50 boys giving a Nazi salute in front of the Sauk County Courthouse in Baraboo, Wisconsin emerged online on Sunday, and it is drawing condemnation from all over the world.

The picture was reportedly taken at the students' junior prom earlier this year.

“We even got the black kid to throw it up #BarabooProud,” a tweet containing the picture read. After being shared thousands of times, the tweet has since been deleted, but the image lives on online.

If anybody from Baraboo High School in Wisconsin can clue me in on why it appears the entire male class of 2018 is… https://t.co/Qta3FYllI2
— Jules Suzdaltsev (@Jules Suzdaltsev) 1542002876.0

And on Monday, it even drew the outrage and condemnation of one the most prominent Holocaust memorials in the world - the Auschwitz Memorial Museum.

In a powerful tweet, The Auschwitz Memorial Museum, which is dedicated to the memory of the more than 1,000,000 Jews that were murdered at the infamous death camp in Poland, warned against the dangers of "normalizing and accommodating hatred."

"It is so hard to find words," the Auschwitz Memorial wrote. "This is why every single day we work hard to educate. We need to explain what is the danger of hateful ideology rising. Auschwitz with its gas chambers was at the very end of the long process of normalizing and accommodating hatred."

It is so hard to find words... This is why every single day we work hard to educate. We need to explain what is t… https://t.co/JzWnZub4EP
— Auschwitz Memorial (@Auschwitz Memorial) 1542020312.0

The Auschwitz Memorial also urged readers to consider the consequences of hate speech by visiting their website.

@jules_su @CarlySidey If @barabooSD wishes to know more about what can be the extreme result of normalization of ha… https://t.co/99rWtRYIlR
— Auschwitz Memorial (@Auschwitz Memorial) 1542020798.0

Most students in the group appear to have raised their hands in the Sieg Heil gesture.

But Jordan Blue, one boy without his arm outstretched, said in an interview with Jules Suzdaltsev that the salute made him "uncomfortable." He also said the photographer was "telling us to make the sign" and that the other boys had bullied him "since entering middle school."

Suzdaltsev later said he is "being flooded with messages from students of this school about some of the guys in the group photo," adding that "it sounds like there is a lot of racist bullying and the school tends to do nothing about it."

Blue's refusal to participate reminded one Twitter user of a similar instance in this country in the 1930's.

In an interview with Newsweek, Baraboo High School Principal Brett Bildsten said that the matter is being investigated: "The District is investigating at this time to determine who is all in the photo."

The Baraboo School District is also working to determine the identities of the students in the picture.

Superintendent Dr. Lori Mueller in a letter to parents acknowledged that the students were making an "inappropriate gesture."

One person noted that the Baraboo School District's symbol is eerily familiar.

@AuschwitzMuseum Have you seen the school emblem? On its own it might be just happenstance, but after the things we… https://t.co/iR2aPl7EAW
— Robbie Wallis (@Robbie Wallis) 1542039774.0

Condemnation of the students' crass embrace of one of the most powerful symbols of hate flooded Twitter on Monday.

"Appalling" is an understatement.

@AuschwitzMuseum So sickening to see this in my own small town. So sorry to all offended. I will never stop fighting this despicable hatred.
— Gary Frisch (@Gary Frisch) 1542043770.0

Some think college admissions should be revoked.

@barabooSD I hope every kid in that photo (along with their parents) is now worried about their college application… https://t.co/ywEVCh3tjm
— Danean (@Danean) 1542040472.0

But not everyone agreed. Blame, some said, lies with the parents and emphasized the need to "deprogram" the hate these kids have been taught.

@badputter58 @moniquedhooghe @AuschwitzMuseum This. I don’t want their lives ruined by them not getting into colleg… https://t.co/tgFPmAhsxJ
— Julie Geen (@Julie Geen) 1542041963.0

@AuschwitzMuseum Start with the parents, even grandparents! They are learning it at home. Trump has made it fashion… https://t.co/oKBj2s1vvs
— Zany (@Zany) 1542027307.0

This shouldn't happen in the 21st Century in the United States.

The fact that this is happening in 2018 is unnerving. Our forebearers fought and won a world war against Naziism and the politics of hate. It should have no place in our country.