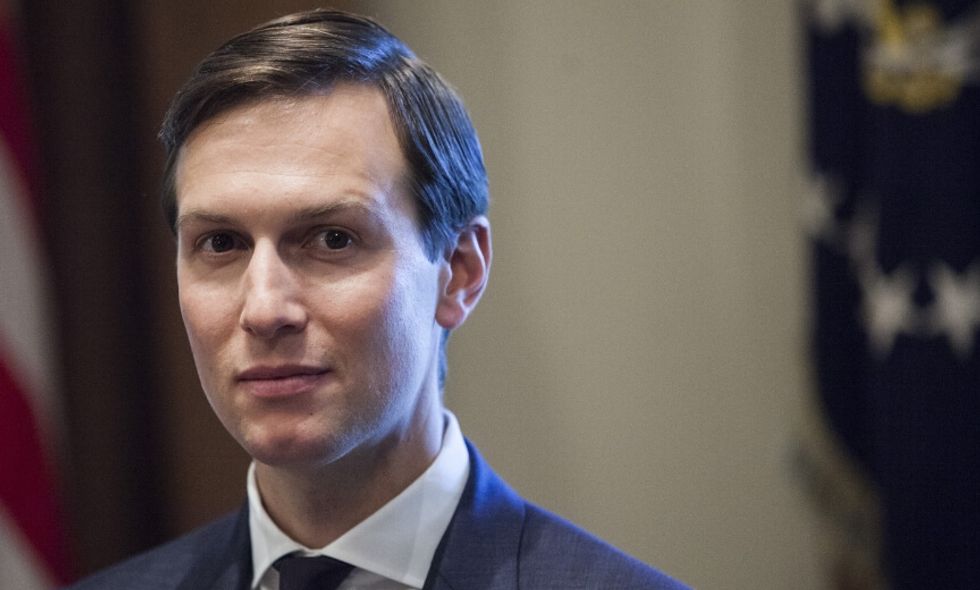 In his 2006 book, The Price of Admission, ProPublica editor Daniel Golden alleged that presidential adviser Jared Kushner's father, real estate developer Charles Kushner, made a $2.5 million donation to Harvard University that may have led to his son's acceptance into the Ivy League institution. Golden's reporting has begun to circulate again after federal authorities charged 50 people, including actresses Lori Loughlin and Felicity Huffman, in a college admissions bribery scandal.

ProPublica shared an article Golden wrote in 2016 shortly after news of the scandal broke yesterday morning. "Don't forget: the rich buy their under-achieving children's way into elite universities with massive, tax-deductible donations," the organization said in a social media post.

ProPublica editor @DanLGolden wrote a book a decade ago about how the rich buy their children access to elite colle… https://t.co/ZHbI06GMeC
— ProPublica (@ProPublica) 1552402040.0

My book exposed a grubby secret of American higher education: that the rich buy their under-achieving children’s way into elite universities with massive, tax-deductible donations. It reported that New Jersey real estate developer Charles Kushner had pledged $2.5 million to Harvard University in 1998, not long before his son Jared was admitted to the prestigious Ivy League school. At the time, Harvard accepted about one of every nine applicants. (Nowadays, it only takes one out of twenty.)

Golden also interviewed administrators at Kushner's high school, who described him, he wrote, as "a less than stellar student and expressed dismay at Harvard’s decision." He quoted a former official at The Frisch School in Paramus, New Jersey, who said:

“There was no way anybody in the administrative office of the school thought he would on the merits get into Harvard. His GPA did not warrant it, his SAT scores did not warrant it. We thought for sure, there was no way this was going to happen. Then, lo and behold, Jared was accepted. It was a little bit disappointing because there were at the time other kids we thought should really get in on the merits, and they did not.”

The news didn't particularly surprise Kushner's critics, though for many it has served as confirmation of the privilege bias in higher education.

An excellent new take from my @DanLGolden: The real scandal is how Jared Kushner and other rich slackers get into… https://t.co/biyDeMd2Mj
— Eric Umansky (@Eric Umansky) 1552431697.0

Kushner has not commented on the story himself. But in 2016, when Golden's article was published, Risa Heller, a spokeswoman for Kushner Companies, said in an email that  “the allegation” that Charles Kushner’s donation to Harvard affected Jared's admission “is and always has been false.” Heller added that Kushner's parents “are enormously generous and have donated over 100 million dollars to universities, hospitals and other charitable causes. Jared Kushner was an excellent student in high school and graduated from Harvard with honors.”

Golden uncovered a scheme in which the rich buy their children admission into elite schools after poring over the records of the more than 400 wealthy donors and members of Harvard’s Committee on University Resources. Golden found that of “the 400-plus tycoons on Harvard’s list — which included people who were childless or too young to have college-age offspring — more than half had sent at least one child to the university.”

Yesterday's arrests were part of the largest college admissions scam ever prosecuted by federal authorities, according to multiple reports. Parents paid up to $6.5 million to guarantee admissions for their children, said FBI Special Agent Joseph Bonavolonta.

In federal court documents, prosecutors outlined how the scheme worked: Parents paid a college prep organization to take on behalf of their children or to correct their answers. The organization also bribed college coaches "to help admit the students into college as recruited athletes, regardless of their abilities." Some of the defendants even created fake athletic profiles for their children to bolster the ruse.

"This case is about the widening corruption of elite college admissions through the steady application of wealth combined with fraud," said Andrew Lelling, the U.S. attorney for Massachusetts. "There can be no separate college admission system for the wealthy, and I'll add that there will not be a separate criminal justice system either. For every student admitted through fraud, an honest, genuinely talented student was rejected."

Felicity Huffman, the Academy Award-nominated star of Transamerica and Emmy-winner for Desperate Housewives, has been charged with felony conspiracy to commit mail fraud and honest services mail fraud and has a court date on March 29 in Boston. She also surrendered her passport after a judge set bond for her at $250,000. Prosecutors said Huffman paid $15,000 to William Rick Singer's fake charity, the Key Worldwide Foundation, to "facilitate cheating for her daughter on the SATs." She also discussed the scheme in a recorded phone call with a cooperating witness.

Lori Loughlin, who earned fame playing Rebecca "Aunt Becky" Katsopolis on the hit series Full House, and her husband, fashion designer Mossimo Giannulli, are facing the same charges. The couple bribed officials $500,000 in exchange for having their daughters recruited to the University of Southern California's crew team, even though neither daughter participated in crew.

Although Huffman and Loughlin are two of the more famous names listed in the federal indictment, the list includes 48 other people, including:

A full list of those facing charges in the scandal can be found HERE.