Group of Central American Migrants Just Filed a Lawsuit Against Donald Trump After Trump Threatened Not to Let Them In, and They're Citing the U.S. Constitution 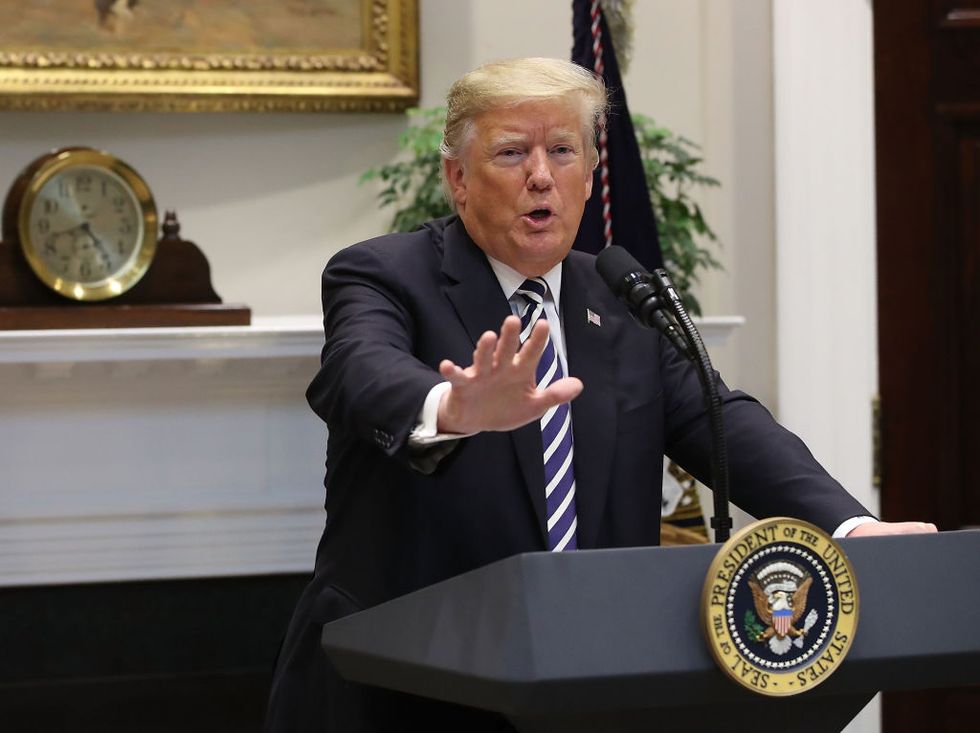 WASHINGTON, DC - NOVEMBER 01: U.S. President Donald Trump talks about immigration in the Roosevelt Room at the White House on November 1, 2018 in Washington, DC. President Trump announced plans to deny asylum to migrants who try to enter the U.S. illegally outside of ports of entry. (Photo by Mark Wilson/Getty Images)

A group of 12 migrants traveling by foot from Honduras to the U.S. to seek asylum filed a class-action lawsuit Thursday against President Trump, the Department of Homeland Security and other entities to ensure their "due process" under the Fifth Amendment, which states that, "no person… shall be compelled in any criminal case to be a witness against himself, nor be deprived of life, liberty, or property, without due process of law."

The lawsuit, which was filed Thursday in the U.S. District Court in Washington, D.C., notes that Guatemala, Honduras and El Salvador are “undergoing a well-documented human rights crisis.” The suit further claims that the Trump administration is infringing on the plaintiffs' right to the Administrative Procedures Act and the Declaratory Judgement Act.

The suit reads, in part:

Trump’s professed and enacted policy towards thousands of caravanners seeking asylum in the United States is shockingly unconstitutional. President Trump continues to abuse the law, including constitutional rights, to deter Central Americans from exercising their lawful right to seek asylum in the United States, and the fact that innocent children are involved matters none to President Trump...

Trump has repeatedly professed that the caravan people will not get into this county, and just as significant, Trump has taken meaningful steps to ensure the world that this is his policy position/initiative, meaningful steps such as deploying thousands of active military troops to the border, waiting on caravan persons to arrive. The legal problem with Trump’s plan to stop caravan persons from entering this country is that Plaintiffs are seeking asylum, and Trump simply cannot stop them from legally doing so by using military, or anyone.

This Court should also note that President Trump has begun hysterically asserting without any evidence that “many criminals” and “many gang members” are in this “onslaught” of migration. In an effort to create fear and hysteria, Trump has gone so far as to call this “an invasion of our Country.” Despite these statements and actions, Trump has been unable to produce any evidence of criminals and gang members within the caravan, which has largely proceeded peacefully on its journey. Plaintiffs now request that this Court declare Trump’s policy positions/initiatives outlined in this Complaint unconstitutional, to end this case and controversy.

The migrants also say that Trump has violated the Flores Agreement by detaining children as a result of his "zero tolerance" family separations policy.

Earlier this year, Politifact, the Pulitzer Prize-winning fact-checking service, noted that while the Homeland Security Department’s longstanding policy “is to separate children from their custodians when they are referred for criminal prosecution,” the Trump administration has opted to “prosecute all illegal crossings.” Families “were rarely prosecuted under previous administrations.”

Additionally, Politifact observes, the 1997 Flores Settlement Agreement “calls for the release of unaccompanied minors to family members or sponsors who can care for them as their immigration case is resolved.” The Trafficking Victims Protection Reauthorization Act of 2008, “which Trump has wrongly called ‘a Democrat rule,’ determines that unaccompanied minors be transferred to Health and Human Services custody.”

The United States Court of Appeals for the Ninth Circuit ruled in Flores v. Lynch that detaining children violated a long-standing agreement that bars the government from detaining children in a jail-like setting, even if they are accompanied by their parents. Immigration officials apprehended 54,000 children and their guardians between Oct. 1, 2016, and Jan. 31, 2017, more than double the number caught over the same time period a year earlier, according to one report.

Yesterday, the president announced that his administration will soon require asylum-seekers to "lawfully present themselves" at a port of entry. He claimed he would sign an executive order restricting asylum rules and suggested that U.S. troops dispatched to the U.S.-Mexico border could fire on someone in a migrant caravan working its way to the border if the person threw rocks or stones at them.

“I will tell you, anybody throwing stones, rocks, like they did to Mexico and the Mexican military, Mexican police, where they badly hurt police and soldiers of Mexico, we will consider that a firearm,” he said, adding that “there’s not much difference” between a firearm and getting hit in the face with a rock.

The Trump administration has not settled on a plan of action if the migrants make it to our nation’s southern border. Critics have pointed out that concerns about the caravan are overblown; the caravan is crossing into Mexico, not the United States. The chances that migrants make it to the U.S. border are low to begin with––it would take about two more months of travel (if not more) before they even arrive.

Trump administration officials who spoke to the press on condition of anonymity say they’ve been “evaluating the options in closed-door meetings that have gotten increasingly heated in the past week,” including one which turned into a “shouting match,” according to recent report from CNBC.

Earlier this week, the president, in what is seen as an attempt to whip up support for Republican candidates ahead of the midterm elections for whom immigrant is a key talking point, signaled he would sign an executive order that would seek to end the right to U.S. citizenship for children born in the United States to noncitizens.