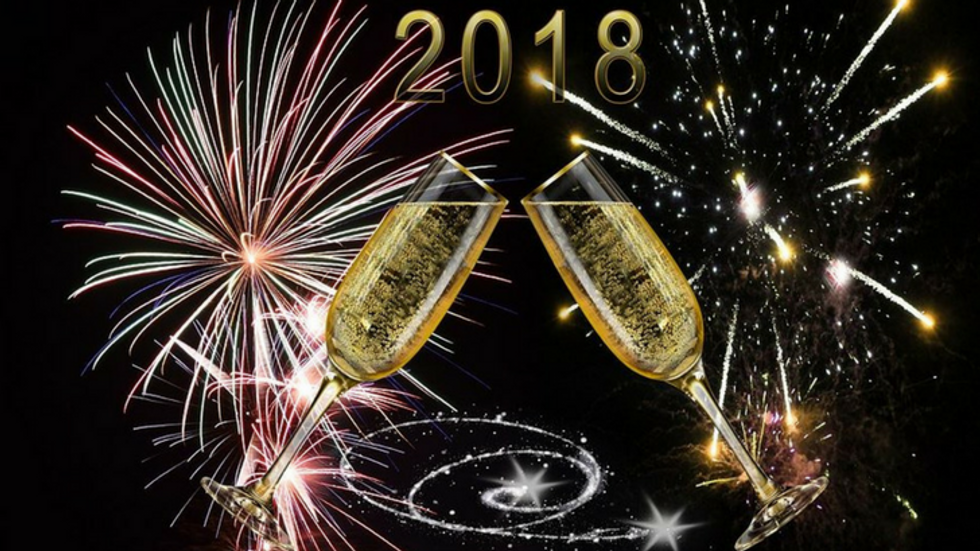 So you’re going to spend the final hours of 2017 in the company of your closest friends and family; but what are you all going to do to pass the time? Mingling can be a fine time killer, but it doesn’t really amp up the energy for that final countdown to midnight.

Instead, why not gather everybody together and get involved in any of these New Year’s Eve party drinking games? The libations will flow just as they’re intended to on New Year’s Eve and, come midnight, chances are you’ll be able to forget about all of 2017’s nonsense and enter 2018 without a care in the world.

It doesn't get much easier than a game of Bones. Gather dice, some beer, a pair of sunglasses, and a group of friends. Start off with one person rolling and take turns, performing the following rules when the corresponding number comes up:

The dice may never be passed, save for when a 5 is rolled, and bathroom breaks are not permitted unless that person rolls a 10. If a die is rolled off the table, they are re-rolled and the offending player has to drink that many ounces of beer.

When a player is wearing sunglasses, they drink whenever any other player does.

How well do your friends know you? What do they really think you'll do with your future. With a friendly game of "Most Likely To...", you can find out. Also, you can ingest mass amounts of alcohol depending on your reputation.

Whoever has the most fingers pointed at them takes a drink and the game continues on in this pattern.

As a group, agree on one person to leave the room out of earshot. Then, all remaining participants discuss and agree on their most glaring personal issue. Then, the subject returns and has to guess what everyone agreed upon.

For every incorrect guess, they take a drink. When they guess correctly, play moves to a different person. Before starting this game, make sure everyone is in good spirits and can handle a little criticism.

On a table, place a deck of cards face down in a circle around a cup in the middle of a table. Players will take turns picking a card and performing any of the following rules associated with that card:

Take a cardboard box - a pizza box, beer case, or shipping box - and have all participants write their name on it somewhere. Then, circle those names and place the box in a central location. Players will take turns tossing a quarter onto the box. Whenever the quarter lands on a person's name, they take a drink and becomes the "tosser".

Should the quarter land on a blank spot, they create a rule, write it on the box, and circle it. Should a quarter land in the circled rule, they have to follow the instructions. Be creative with the rules, but remember to keep things safe. Make sure they're something an inebriated person can do without risk of harm.

For this game, you'll need the assistance of a televised New Year's Eve celebration. The Times Square ball drop is probably best. Whenever a performer takes the stage, watch for telltale signs that they're definitely lip syncing. Whenever you spot one, take a drink.

Keep an eye out for lips moving when there are no vocals, vocals without the performers lips moving, or an under-exaggerated performance for a passionate or lively song.