Is the GOP better off with Ted?

Candidates like Trump, Fiorina, and Carson each touted their lack of political experience in 2015. But voters in 2016 may turn to a candidate who knows the ropes. 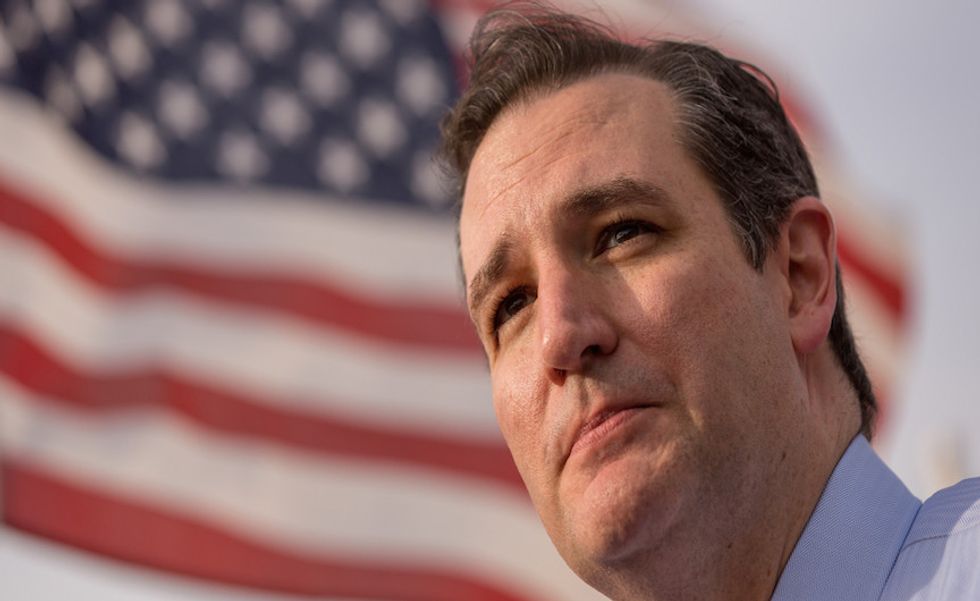 As 2015 came to a close, Donald Trump dominated the Republican field with a commanding lead in the polls. Until now, the unlikely political juggernaut has seemed virtually unstoppable, his nomination secure.

But in December, GOP leaders began talking of a possible brokered convention, leaving many to wonder whether Trump really does have the nomination wrapped up and, if he doesn’t, who among the ever-thinning herd of Republican presidential candidates will take his place.

Recent polls indicate that Senator Ted Cruz may be a serious contender.

Ted Cruz’s candidacy is the capstone of his family’s quintessential American Dream story. His mother, born into a working class family in Delaware, was the first person in her family to go to college. She graduated from Rice University with a degree in mathematics. Senator Cruz recounts how his mother refused to learn to type, so that employers would not overlook her computer programming skills. Cruz’s father was a Cuban immigrant who came to the U.S. without a dime. Working as a dishwasher, he paid his way through college and started his own small business; he met his wife on an oil exploration venture in Texas, and the couple moved to Canada in the 1960s. Their son, Rafael (Ted) Cruz was born in Calgary, Alberta, in December 1970.

Ted spent his formative years in the Houston, Texas, area and went on to attend Princeton University. After earning his degree, Cruz was accepted to Harvard Law School, where he served on the editorial board of three law journals, including the prestigious Harvard Law Review, the Harvard Journal of Law and Public Policy, and the Harvard Latino Law Review. Cruz graduated with High Honors, and Alan Dershowitz, one of his professors, describes Cruz as having been “off-the-charts brilliant.”

Republican voters have rallied around political inexperience during this election cycle. Inexperience, however, is not something Cruz is likely to boast about. Though he refers to himself as a Washington outsider, and while he might not have much in the way of executive credentials, if the election were decided based on legal resumé alone, Cruz would sail past his competition. In many ways, sharing the stage with Ben Carson and Donald Trump is an insult to Cruz’s legal

prowess; whereas his competitors purport to have a gut-level understanding of the U.S. Constitution, the very core of Cruz’s career has been the interpretation of that hallowed document.

Cruz’s first job after law school was as a clerk for the Fourth Circuit. He was then offered a coveted opportunity to clerk for Supreme Court Chief Justice William H. Rehnquist (of the roughly 1,000 clerkship applications the U.S. Supreme Court receives from the country’s best and brightest each year, only 36 candidates are ultimately selected to serve).

In 2000, after working as a private practice attorney, Cruz became a domestic policy advisor to George W. Bush’s Presidential campaign. When Bush took office, Cruz worked for the U.S. Department of Justice as an associate deputy attorney general and as the director of policy planning at the Federal Trade Commission.

Cruz remained in Washington until 2003 when he was appointed Solicitor General of Texas, the youngest person ever to hold that office. Cruz has argued before the Supreme Court nine times, and he taught U.S. Supreme Court litigation at the University of Texas School of Law—all before he was elected to the Senate in 2012.

Cruz on the issues

Many voters may find Senator Cruz’s views extreme. He kicked off his campaign in March 2015 at Liberty University, an evangelical college that rejects the theory of evolution. The choice likely thrilled his religious base, but it could alienate mainstream voters in the general election.

Liberty University may have seemed a logical selection for Cruz, whose own relationship with science is somewhat tenuous. While he claims science and his faith are not incompatible, the senator fervently denies the existence of—and even the scientific basis for— any possibility of man-made climate change. In October, he told Glenn Beck “[c]limate change is not science. It’s religion.” Cruz went on to attack rhetoric that brands people “skeptics” and “climate-change deniers,” arguing that merely questioning climate change labels one a heretic. In August, he told a group of conservative donors that climate scientists have been “cooking the books,” saying, “[t]hey’re actually adjusting the numbers.”

Cruz is also vehemently anti-choice. His rhetoric may be intended to fire up his extreme right-wing base—arguing that the real war on women is the pro-choice movement, or referring to Roe v. Wade as a “dark anniversary”—but many view his actual policy positions as harmful to women’s health. For instance,

he believes that abortion should be permissible only if the life of the mother is at risk. Before he was elected to the Senate, Cruz advocated for a religious exemption to the Affordable Care Act’s contraception mandate. Once elected, he co-sponsored a bill in the Senate that would have banned all abortions after 20 weeks. In 2015, Cruz became a vocal proponent of defunding Planned Parenthood; likening the organization to a “criminal enterprise,” Cruz urged his fellow Republicans to “stop surrendering” to the President’s liberal agenda and to “start standing for our principles.” He also strongly supported laws in his home state requiring doctors at abortion clinics to have hospital admitting privileges, and for clinics to meet certain architectural standards. These provisions, if upheld by the Supreme Court, will close all but 10 clinics that provide abortion services in Texas.

Though his staunch opposition to “Obamacare” won him the hearts of many, his unrelenting charge to repeal the legislation—an effort that ultimately led to a government shutdown—did not endear him to the GOP. John McCain told the New Yorker’s Jeffrey Toobin “[i]t was a fool’s errand, and it hurt the Republican Party.” McCain added that he believed Cruz had since “learned his lesson,” but Cruz passionately maintains his devotion to repealing “every word” of Obamacare.

Cruz’s zealous opposition to gay rights is unlikely to earn him broad support. A recent poll indicates that fewer Americans are likely to be upset by same sex marriage than discrimination against same-sex couples. When the Supreme Court issued its historic ruling in Obergefell v. Hodges in June, Cruz immediately counseled that states opposing the ruling should simply ignore it, claiming that the ruling applied only to the three states that were party to the suit.Despite Cruz’s argument that “there’s no legal obligation [for states] to acquiesce to anything other than a court judgement,” no state could ignore Obergefell forever. If new plaintiffs filed suit against same-sex marriage bans, states could defend themselves in federal court, but the inevitable outcome would be a judicial overturn of any existing bans. Senator Cruz’s hardline views about immigration are even more perplexing. Despite being the son of a Cuban immigrant, Cruz is firmly opposed to any sort of amnesty for persons who entered the country illegally

—even if those persons were minors brought here by their parents. During a campaign event, a young woman confronted Cruz about his hardline stance on immigration. When the woman explained that she benefitted from President Obama’s Deferred Action for Childhood Arrivals (DACA) program and was concerned about what would happen to her once Obama left office, Cruz didn’t flinch as he told her:“I would note that if you are a DACA recipient that means that you were brought here illegally,  and violating the laws has consequences. And one of the problems with our broken immigration system is that it is creating human tragedies, and there are human tragedies when people break the law. But I can tell you what the law is in every country on Earth—if I illegally immigrate to England or Germany or France or China or Mexico—and they catch me—they will deport me. That’s what every other country on Earth does.  And there’s no reason that America’s laws should have less respect than the laws of every other country on Earth. We should welcome people who come following the laws, but there are consequences for breaking the laws, and that is part of what makes America the nation that we are.”In other words, President Cruz would end DACA and people like the young lady in the video would be deported.Finally, Senator Cruz supports expansive reading of the Second Amendment, and has defended the right to bear arms at every opportunity. Cruz is the darling of the National Rifle Association (NRA); his campaign website boasts a quote from NRA Executive Vice President Wayne LaPierre calling Cruz “one of our nation’s leading defenders of the Second Amendment.” LaPierre says, “Ted has fought tirelessly to defend our constitutional right to keep and bear arms, and his leadership was absolutely critical to our major victories before the U.S. Supreme Court.” In fact, soon after being elected to the Senate, Cruz threatened to filibuster a common-sense gun control bill in 2013 that would have increased background checks and toughened standards for interstate gun sales. On the campaign trail in Iowa, Cruz has already vowed to undo President Obama’s recent executive orderregarding increased background checks and enforcement of existing firearms regulation. Cruz’s campaign launched a full-scale assault against the

To read more, continue to the next page. President; the candidate’s fundraising website showed an image of the President dressed in tactical gear, and the candidate’s Twitter feed repeatedly showed images of Obama donning a tyrannical crown.

In a 2015 New York Times article about Cruz’s interpretation of the Second Amendment, Cruz says that in addition to preserving the right to protect one’s home and family, the Second Amendment should “serve as the ultimate check against governmental tyranny--for the protection of liberty.” Cruz’s hardline views might inspire the “gun vote,” but may not serve him well in the general election, as a recent Gallup poll found that 55% of Americans support stricter gun control laws.

No fear of being the underdog

Republican leaders might hesitate to throw their support behind Cruz, as his politics are unlikely to inspire the masses in the general election. Cruz may be brilliant, but he’s also a divisive figure within the party itself; the fact that he made it to the Senate at all is somewhat remarkable.

Cruz refers to his election as a victory for the underdog, but that doesn’t paint an accurate picture of what transpired. Yes, he was behind in Texas’ Republican primary, and ended up winning the general election. He came in second in the primary with 34% of the vote, but voter turnout had been poor—only about 12% of eligible Republicans showed up. With just 45% of the vote, David Dewhurst was forced into a runoff with Cruz.  Then, only 8.5% of eligible voters cast ballots in the runoff. As tends to be the case when voter turnout is low, that 8.5% of the electorate comprised primarily voters with extreme ideological views. Naturally, Cruz trounced Dewhurst with 57% of the vote. After that, it came as no surprise when he beat the Democrat in the general election—it was never a fair fight. Texas still leans heavily to the right, and voters were much more likely to choose any Republican over any Democrat.

Cruz could certainly win Iowa. He might win California. It’s even possible he’ll steal the nomination from Trump. But if voter turnout is high in the general election, it’s more likely that the country will elect a more progressive candidate over a hardline, ideological Republican. If Cruz wins the nomination, he would do well to rein in his rhetoric before November. Otherwise, he won’t have a prayer.