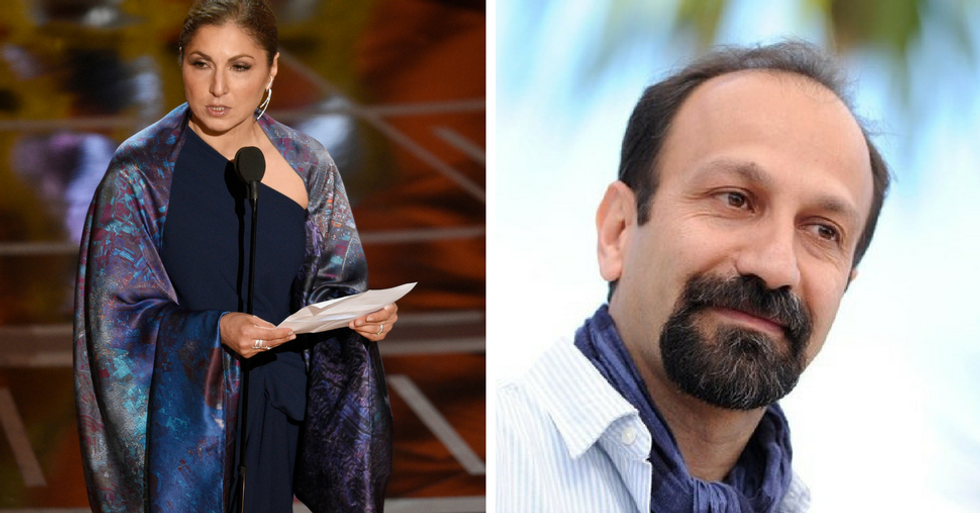 Farhadi had chosen not to attend the ceremony in protest against Donald Trump's executive order banning travelers from seven Muslim-majority countries, including Iran. Farhadi opted to stay in Iran even after a district court blocked Trump's order. Anousheh Ansari, an Iranian American engineer and scientist who became the first Iranian to go to space, accepted the award on Farhadi's behalf.

The full text of Farhadi's speech is below:

It's a great honor to be receiving this valuable award for the second time. I would like to thank the members of the Academy, my crew in Iran, my producer Alexandre Mallet-Guy, Cohen Media, Amazon and my fellow nominees in the foreign film category. I'm sorry I'm not with you tonight. My absence is out of respect for the people of my country and those of other six nations whom have been disrespected by the inhumane law that bans entry of immigrants to the U.S. Dividing the world into the us and our enemies categories creates fear. A deceitful justification for aggression and war. These wars prevent democracy and human rights in countries which have themselves been victims of aggression. Filmmakers can turn their cameras to capture shared human qualities and break stereotypes of various nationalities and religions. They create empathy between us and others. An empathy which we need today more than ever.

The speech received an almost immediate backlash from the right after it concluded. Critics accused the Iranian filmmaker of using his platform to "lecture" the nation about human rights and democratic ideals, especially given his own country's record of human rights violations.

But Farhadi's defenders were similarly impassioned.

Proud of cast & crew of "The Salesman" for Oscar & stance against #MuslimBan. Iranians have represented culture & civilization for millennia
— Javad Zarif (@Javad Zarif) 1488167147.0

This isn't the first time Farhadi made a political statement at the Oscars. In 2012, he won the award for Best Foreign Language Film for A Separation and dedicated his prize to the Iranian people. "I proudly offer this award to the people of my country, the people who respect all cultures and civilizations, and despise hostility and resentment," Farhadi said at the time.

Farhadi was not the only Muslim in the spotlight last night. Mahershala Ali, who won the Best Supporting Actor statuette for his performance in Best Picture winner Moonlight, became the first Muslim actor to win an Academy Award. The actor previously detailed his conversion to Islam in a speech at last month's Screen Actor's Guild Awards. “My mother is an ordained minister,” Ali said at the time. “I’m a Muslim. She didn’t do back flips when I called to tell her that I converted 17 years ago. But I tell you now, we put things to the side, and I’m able to see her and she’s able to see me, we love each other, the love has grown. And that stuff is minutia — it’s not that important.”