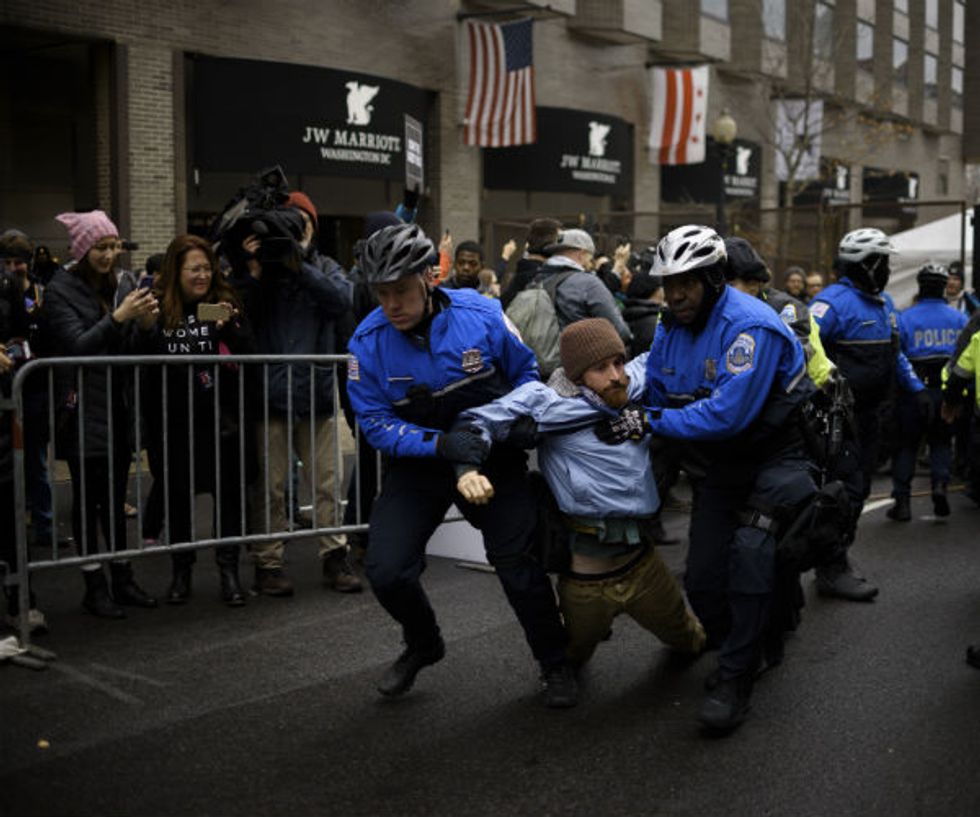 Six reporters were arrested and charged with felonies while covering the violent protests that took place in Washington, D.C. during Donald Trump’s inauguration. They face up to ten years in prison and a $25,000 fine if convicted.

The reporters are Evan Engel of Vocativ, Alexander Rubinstein of RT America, Jack Keller of the documentary series Story of America, and independent journalists Matthew Hopard, Shay Horse and Aaron Cantu. They were arraigned in superior court on Saturday, the day after the inauguration. They all deny wrongdoing.

These reporters were six of over 200 people who were arrested in connection with protesting taking place over Inauguration Day in Washington, D.C.

Keller said that he was detained for about 36 hours, despite telling the officers he was covering the demonstrations as a journalist. “The way we were treated was an absolute travesty,” he said.

Preliminary hearings for the journalists are set for February and March.

The National Lawyers’ Guild accused the police of having “indiscriminately targeted people for arrest en masse based on location alone.”

This assertion is backed up by the arrest reports for the journalists, none of which make any specific allegations about their allegedly illegal conduct. Five of the six arrest reports use identical language, stating that “numerous crimes were occurring in police presence” and that a “crowd was observed enticing a riot by organizing, promoting, encouraging and participating in acts of violence in furtherance of the riot.”

Mark Goldstone, an attorney representing many of the protesters arrested that day, said that the police “basically identified a location that had problems and arrested everyone in that location.”

The US Attorney’s Office for Washington, D.C. declined to comment on the specific cases. But William Miller, spokesman for the office, said that “based on the facts and circumstances, we determined that probable cause existed to support the filing of felony rioting charges.” He continued: “As in all our cases, we are always willing to consider additional information that people bring forward.”

“These felony charges are bizarre and essentially unheard of when it comes to journalists here in America who were simply doing their job,” said Suzanne Nossel, executive director of Pen America. “They weren’t even in the wrong place at the wrong time. There were in the right place.”

Carlos Lauria, a spokesman and senior program coordinator for the Committee to Protect Journalists, found the arrests alarming because the public has an interest in access to information about violent protests. The Committee has asked that the charges be dropped immediately.

“Our concern,” Lauria said, “is that these arrests could send a chilling message to journalists that cover future protests.”

Said Nossel, “Obviously we were girded for worrisome and troubling developments. But the speed, pace and ferocity of the attacks on journalists, the purveying of falsehoods, the silencing of government and agencies that interface with the public—for all that to happen in a matter of days puts us on notice that some of the worst fears may not have been so far-fetched.”