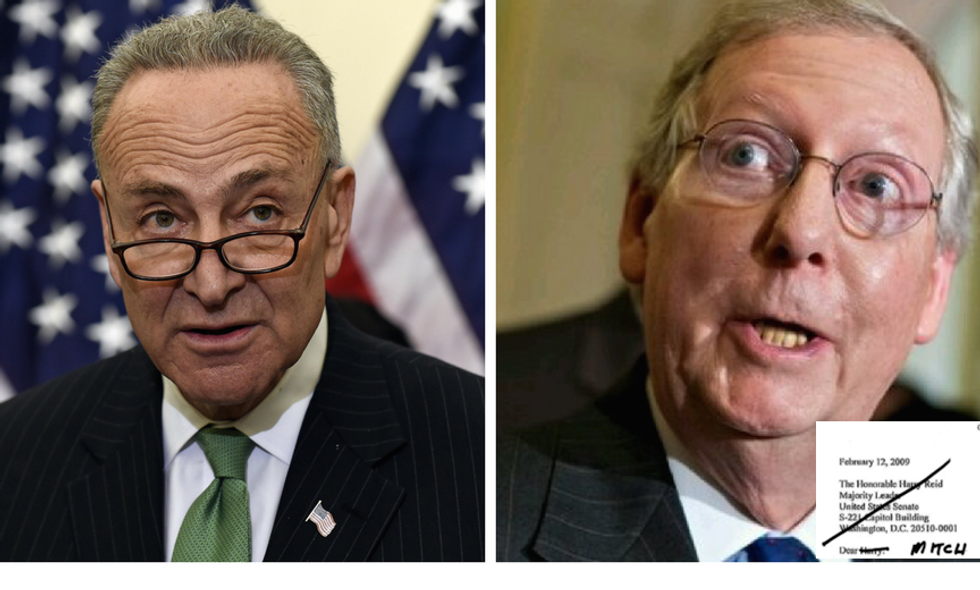 While concerns over unprecedented conflicts of interests regarding Trump's cabinet picks mount, Senate Minority Leader Chuck Schumer sent a memorable letter to the Majority Leader, Mitch McConnell, warning Republicans that all cabinet members must meet standards of accountability on ethics, regardless which party is in power.  Schumer's letter to McConnell is almost an exact replica of the letter McConnell had sent to Harry Reid in 2009 when Democrats controlled the Senate. All McConnell had to do was swap out the names:

Our requests are eminently reasonable, shared by leaders of both parties. I'll return this letter to @SenateMajLdr… https://t.co/I0944yDd3e
— Chuck Schumer (@Chuck Schumer) 1483991282.0

McConnell in fact had extended that same written request to Democrats on behalf of Republicans, specifically asking that no exceptions be made for background checks and ethics clearances for President Obama’s cabinet picks. Schumer’s letter underscored the frustration of the nonpartisan Office of Government Ethics, which has been vocal over the Republicans' decision to hold confirmation hearings where ethics review processes remained incomplete and where several ethics issues related to the Trump's administration conflicts of interest worldwide remained pending. OGE Director Walter Shaub stated in a letter that “the announced hearing schedule for several nominees who have not completed the ethics review process is of great concern.” He added, “It has left some of the nominees with potentially unknown or unresolved ethics issues shortly before their scheduled hearings.I am not aware of any occasion in the four decades since OGE was established when the Senate held a confirmation hearing before the nominee had completed the ethics review process.”

In 2009, Republicans had threatened their majority in the Senate would prevent Obama's nominees from acquiring clearance unless they strictly complied with the rules. Schumer’s admittedly cheeky response highlighted that, today, they show few concerns over skipping the institutional process and speeding up the nominations even while several ethical issues remain unresolved.

The Republicans’ next move remains uncertain. Schumer warned that if they proceeded with the confirmation votes without the OGE and the FBI having finished required background checks, Democrats stood ready to fight by delaying the confirmation process for weeks. “We’re not doing this for sport,” Schumer stated. “To spend an extra day or two on each nominee; even if it takes several weeks to get through them all in order to carefully consider their nominations … that’s well worth it.”

Given that Republicans hold 52 of 100 seats in the Senate and they only need 50 votes to clear a nominee, Democrats are left without much leverage to pressure Republicans to complete the procedure by the book. But even a handful of GOP Senators willing to stand firm on the ethical questions could tip the scale.