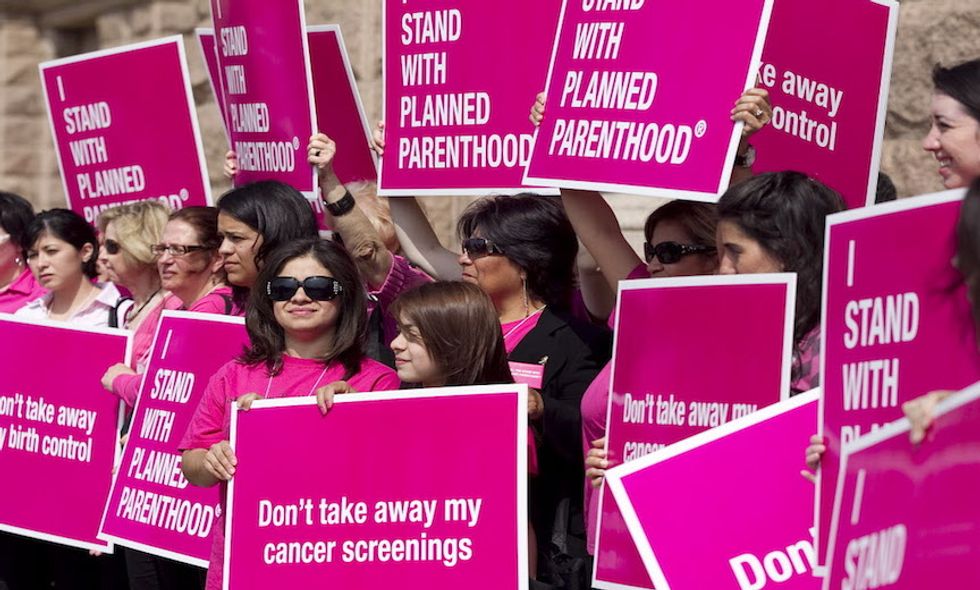 Valerie Mascorro, center with sunglasses, stands next to her daughter, Abigail, 12, as they hold a sign showing their support for Planned Parenthood during a rally at the Capitol in Austin, Texas on Tuesday, March 8, 2011. A day after losing a fight over a bill that would give Texas some of the strictest abortion rules in the country, House Democrats stood Tuesday with Planned Parenthood advocates working against a barrage of legislative attempts to weaken their programs. (AP Photo/Austin American-Statesman, Deborah Cannon) MAGS OUT; NO SALES; TV OUT; INTERNET OUT; AP MEMBERS ONLY

Yesterday, Texas and Virginia were the sites for the latest victories for Planned Parenthood in response to attempts to defund the women's health organization.

In Virginia, Governor Terry McAuliffe vetoed a bill passed by the legislature. The bill would have prevented Planned Parenthood and other groups from receiving state funding for any of their services because they perform abortions. This would have included the state's contract with Planned Parenthood to conduct testing for sexually-transmitted diseases. Around 1,700 Virginians with low-incomes used the service last year.

In his statement on the veto, McAuliffe said, "If we are going to build a new, more vibrant Virginia economy, we need to open doors to quality, affordable health care, not close them. Attempts to restrict women’s access to health care will impede the goal of making Virginia the best place to live, work, and run a business."

In Texas, a federal judge temporarily blocked Texas from cutting funds to Planned Parenthood. The Texas cuts were based on supposed ethics violations in the aftermath of the videos released two years ago--videos that have been proven false.

Should the ruling stand, it would be the second court defeat of Texas conservatives' attempts to restrict abortion in less than a year. In June, the Supreme Court struck down a Texas law that would have closed more than three-fourths of the clinics in the state.

After reviewing the evidence currently in the record, the Court finds the Inspector General, and thus HHSC, likely acted to disenroll qualified health care providers from Medicaid without cause. Such action would deprive Medicaid patients of their statutory right to obtain health care from their chosen qualified provider. The deprivation of that right is an irreparable injury in and of itself but could also disrupt the care of the 12,500 Texas Medicaid patients receiving services from Planned Parenthood.

In other words, Texas officials would hurt both Planned Parenthood and those who receive medical services there for no legitimate reason. The Texas attorney general plans to appeal the ruling.

Officials at Planned Parenthood and other supporters of abortion rights are pleased with both victories.