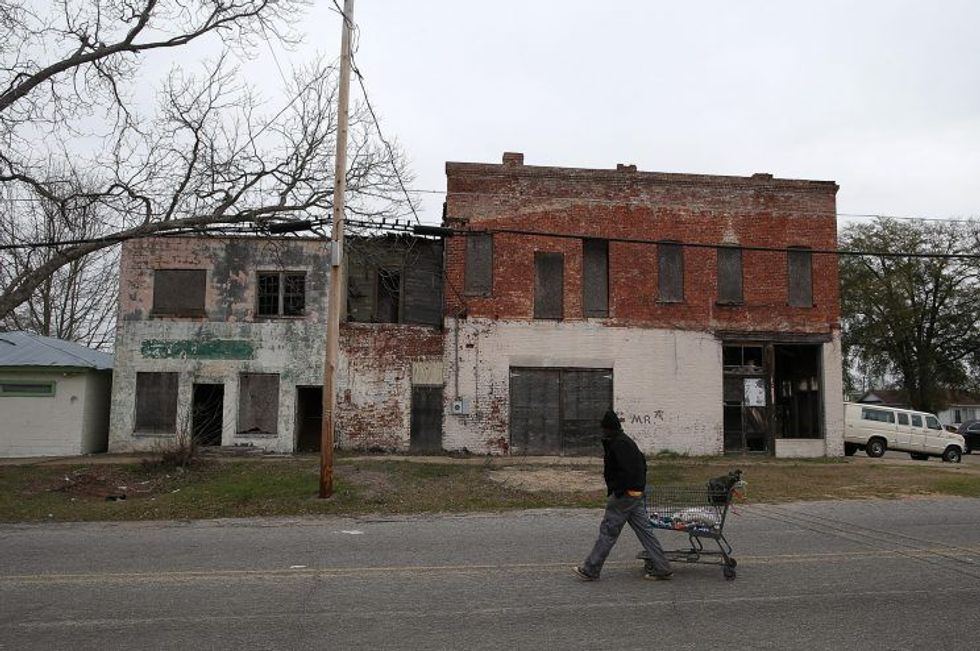 The term “inner city” conjures images of run-down, dangerous urban areas besieged by crime, drugs, decay, and gun violence. But in the past 30 years, many once-infamous city neighborhoods have seen their property values and desirability skyrocket. Factors such as gentrification, high demand for housing for a growing population, a preference among young people for urban living, the reversal of white flight, the revival of historic architecture, and even the tech boom have made many inner city neighborhoods the hot place to live, work, and play.

Meanwhile, in rural America, problems once associated with city life have taken hold, leading some to call the countryside “the new inner city.”

“Starting in the 1980s, the nation’s basket cases were its urban areas—where a toxic stew of crime, drugs and suburban flight conspired to make large cities the slowest-growing and most troubled places,” reported the Wall Street Journal, in a startling analysis that foundthat “by many key measures of socioeconomic well-being, those chartshave flipped. In terms of poverty, college attainment, teenage births, divorce, death rates from heart disease and cancer, reliance on federal disability insurance and male labor-force participation, rural counties now rank the worst among the four major U.S. population groupings (the others are big cities, suburbs and medium or small metro areas).”

Crime, one of the key stigmas once attached to urban areas, is now a persistent problem in rural America, due to a host of factors which include the opioid drug epidemic, low educational attainment, and limited economic opportunities. More rural people are going to jail than ever before. A new report finds that incarceration rates are dropping among residents of urban areas, while rural populations are seeing a skyrocketing numbers of residents go to prison.

Millions of Americans are incarcerated, and millions more are on probation. A group called Measures for Justice has analyzed data going back to 1970 and found that rural incarceration rates have spiked in recent years. Ten years ago, people in rural, suburban, and urban areas were about equally likely to go to prison. Today, people in smaller counties are about 50 percent more likely to go to prison than people in more populous counties, mainly due to drug offenses.

The opioid epidemic is rampant in rural areas. Beginning with prescription painkillers like Percocet, Vicodin, and Oxycontin, many users advanced to the highly potent and highly dangerous Fentynl and its synthetic versions to cheaper, easier to obtain heroin after easy access to their prescription drugs ended. The CDC reports three out of four new heroin users report abusing prescription opioids before trying heroin. In rural areas, such as the Rust Belt and Appalachia, the physical nature of many jobs leads to workplace injuries that begin the path to heroin.

The crisis is especially worrisome in areas that report poor education levels, the collapse of traditional job opportunities, and the replacement of traditional community-based businesses with low-paying service sector jobs. The 2016 election highlighted this crisis and some analysts see a correction between rural counties that voted for Trump and opioids — noting that a similar connection didn’t exist between Mitt Romney voters in 2012.

In 2016, opioid overdoses killed between 59,000 and 62,497 people, more people than died in the entire Vietnam War. That number is expected to rise in 2017. Meanwhile, while attention is now focused on the opioid crisis, meth is making a comeback in rural areas, which were plagued by the drug in the 1990s. Back then, meth was being produced in makeshift labs across the rural U.S., and fires and explosions would regularly remind communities of its presence. Today, it’s being shipped in from Mexico, and it’s cheaper than ever.

“A lot of people thought if meth labs are down, meth use is down,” said Mark Woodward, a spokesman for the Oklahoma Narcotics Bureau. He notes that many states tightly regulated the sale of the ingredients that made meth easy to make. “But so much is coming in from Mexico, and it’s just as good as the domestic cooked product. Why risk leaving a paper trail at a pharmacy when you have a buddy coming up from El Paso tonight with a cheap supply?”

Many woes that have afflicted troubled inner city neighborhoods are attributed to teen mothers, who are ill-equipped for parenthood and, due to the high costs of child care, housing, and other expenses, have difficulty achieving the education needed to rise out of poverty. In reality, the teen birth rate is 63 percent higher in rural areas. In urban counties with large populations, the birth rate for teens age 15 to 19 is 18.9 teens per 1,000, while rural counties with populations of fewer than 50,000 people reported a significantly higher teen birth rate of 30.9 per 1,000, according to the National Center for Health Statistics (2015).

Babies are being born to teenagers living in rural poverty, where lack of public transportation, job opportunities, comprehensive sex education, and access to family planning resources make it even harder to break the cycle of poverty.

"Young people in rural areas were less inclined to say, 'I'm going on to college,' and that is significantly linked to a higher teen birth rate," said Bill Albert, spokesman for the National Campaign to Prevent Teen and Unplanned Pregnancy. "Having a child or fathering a child and trying to complete your education is challenging to say the least. But if you have decided that 'I've done my high school and that's where I'm stopping' perhaps delaying childbearing may not be as pressing."

High rates of teen pregnancy combined with high rates of opioid abuse mean that high numbers of parents are unable to care for their children properly. Across the U.S., the foster care system is overwhelmed with children who have been removed from homes with drug abuse or overdose deaths.

In a 2016 policy brief called  "Families in Crisis,"the U.S. Health Resources and Services Administration saidthat the National Advisory Committee on Rural Health and Health Services “is concerned that the opioid crisis could exacerbate child abuse and neglect given that we’re seeing a link nationally. State child welfare systems have reported that they are experiencing an increase in families coming to their attention with substance use problems impacting their ability to safely parent.”

Worse, more babies are being born addicted to drugs. “We know that rural areas tend to be poorer, there tends to be higher rates of chronic disease burden, higher rates of mental health issues,” says University of Michigan C.S. Mott Children’s Hospital Dr. NicoleVillapiano. “So that in addition to the challenges around access to care, especially primary care and mental health, that made it kind of a perfect storm for the opioid crisis to really be affecting moms and their babies in rural areas in a disproportionate way.”

If rural residents manage to avoid drugs, unemployment, and unplanned pregnancy, they still share many other woes with urban or “inner city” communities.

Affordable housing is in short supply in many rural areas. Dwindling populations and a focus on lucrative fuels such as ethanol have led to rural food deserts. In urban areas, a food desert is defined as a low-income area where at least one-third of residents live more than one mile from a grocery store. In rural areas, that distance is 10 miles, which means rural residents must also pay more in fuel costs to bring home groceries. While 16.7 percent of rural residents live below the poverty line — slightly higher than the number of urban residents living in poverty — rural populations are underserved by programs that provide food assistance.

Bad drinking water isn’t just a problem for places like Flint, Michigan. In many rural communities, contaminated water is becoming the norm as unchecked agricultural pollution and mining activities degrade aquifers. Many rural homes draw water from a well rather than a treated city water supply, and nitrate fertilizers, animal waste from feedlots, and contamination from pipelines and mining activities mean that well water quality is impaired.

Gun violence continues to plague some urban areas, but rural America isn’t immune. The hunger for meth and heroin has brought gang violence to the countryside. Rural communities also experience disproportionately high rates of gun suicide deaths; troublingly, a large number of children are among those who commit suicide using guns.

HIV, hepatitis C, and sexually transmitted diseases are rampant in rural areas, in part due to the opioid epidemic, and exacerbated by a lack of education and access to health care. Places like Austin, Indiana, which has the worst rural HIV outbreak in the U.S., demonstrate how vulnerable rural populations are to disease.

“For many years this was an urban issue, an inner-city issue, but what we learned from southern Indiana is that rural parts of our country are now at significant risk,” said Ardis Hoven, an infectious disease specialist with Kentucky’s Department for public health. “If you look at these areas, the uniqueness is not only the poverty, not only the issue of unemployment and early teen births and educational issues, but the cultural issues embedded in many of those areas.”

So what is the outlook for rural America? The demographics point to an aging population that is losing its young people to cities and suburbs, leading to shrinking towns. A lack of broadband Internet connectivity contributes to already stagnant economic activity, which makes rural communities undesirable for many young people.

Trump’s proposed budget would further compound these problems, with drastic cuts to many programs that are considered lifelines to rural areas. The latest Senate healthcare bill would further diminish rural prospects by cutting off rural patients from Medicaid and closing rural hospitals — which would have a trickle-down effect on rural schools, property values, and quality of life. "Medicaid cuts are always hard to rural hospitals," said Sidney Watson, a St. Louis University health law professor. "People have less employer-sponsored coverage in rural areas and people are relying more on Medicaid and on Medicare."

Rural areas have been slower than average to recover from the great recession. A recent survey found 67 percent of rural Americans rate job opportunities in their community as "fair" or "poor," while 50 percent of city residents rate their job prospects as "excellent" or "good.

However, in theory, a Republican president and GOP-dominated Congress should be good for rural America — it’s what they voted for, anyway. Trump won a higher percentage of the vote in rural communities, 62 percent, than any Republican presidential candidate in modern times.

It remains to be seen how rural areas fare under Trump. At this juncture, many rural Trump voters seem satisfied. At a recent rally in Iowa, he promised to expand Internet access, and boost agricultural exports, and he praised farmers.

“Farming is something that is very beautiful to me. I’m not a farmer, but I’d be very happy to be one,” Trump told the crowd. “It’s a very beautiful world to me, and it’s a truly noble American profession.”